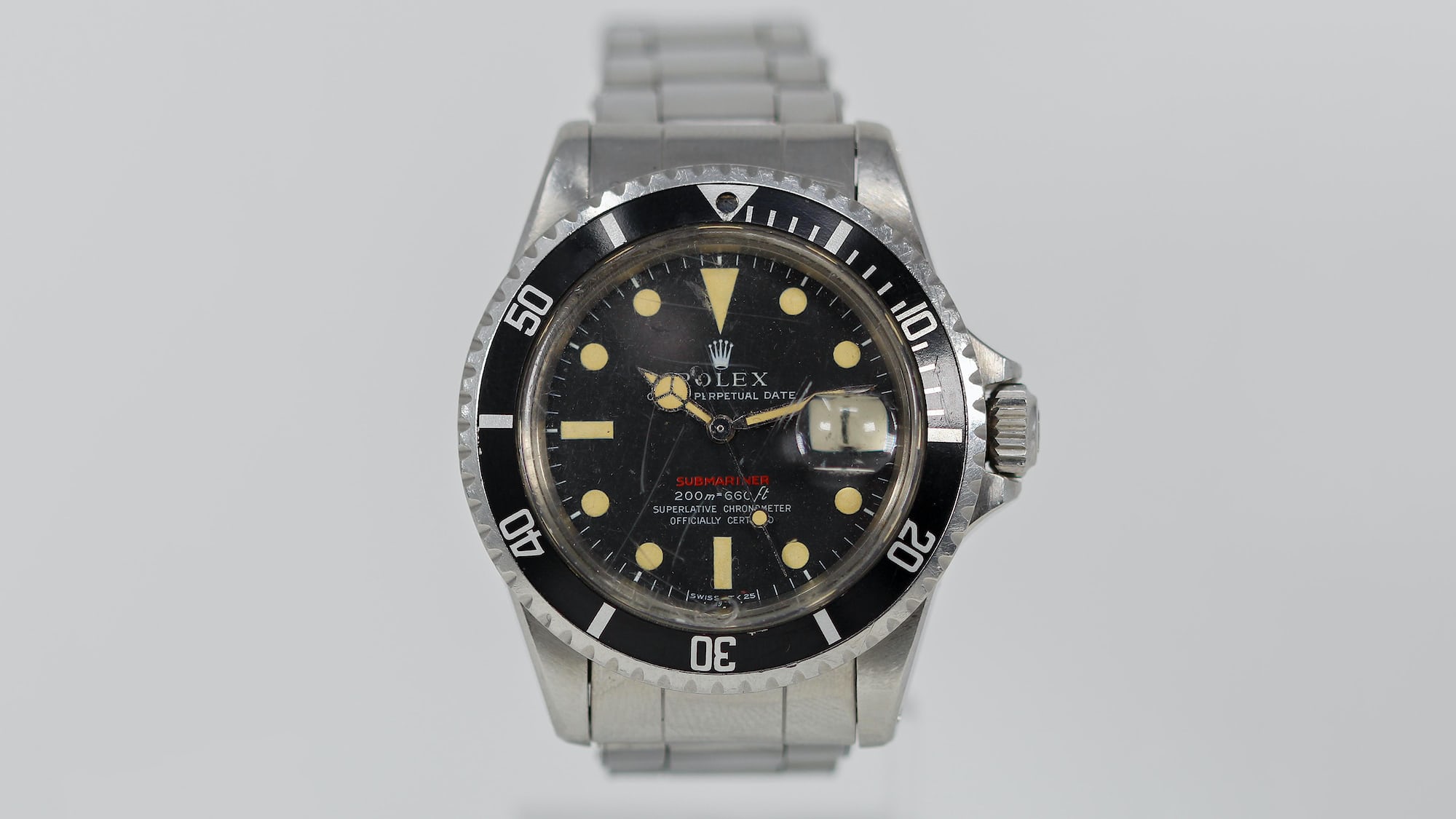 As the age-old adage goes, those who patiently wait for seven days to pass are rewarded with breakdowns of five silly cool vintage watches by some guy named Isaac. It still rings true, as we’re back with another superb selection, with picks ranging from a military-issued chronograph from Breitling, to a Movado retailed by Tiffany & Co., plus a Patek Philippe Calatrava awarded to someone involved in a Ponzi scheme of sorts. In a more regular realm, we’ve got what’s likely the cleanest Red Submariner to hit the market in a while, and a uniquely tasteful Zenith chronograph. Now that you’re hooked, it’s time to reel things in.

Last week, I found myself explaining the whole vintage watch thing to an uninitiated friend, during which I went into the appeal of “the story.” Just as it’s fascinating to study watches, it’s also interesting to explore approaches to collecting. For some, the watch is merely a conduit to a tale that harkens back to a significant or even straight-up weird time in history. The watch itself does matter to this crop of collectors, but its the story that seals the deal, elevating a mere timepiece to a truly compelling conversation piece.

You’re looking at a Ref. 3565/1 Calatrava from Patek Philippe, which is a nice watch, but not exactly my cup of tea under regular circumstances. These however aren’t regular circumstances, as evidenced by the small logo above the six o’clock position. Investors Overseas Service (IOS) was a company founded by the flamboyant and controversial financier Bernard Cornfeld; the firm sold mutual funds and other investment products throughout the 1960s and ’70s. By making use of a few loopholes and operating the firm out of Geneva, IOS’ clientele of American expats and servicemen stationed outside the States weren’t required to pay income tax, making for an attractive proposition. It was all fine and well until Cornfeld allegedly began dipping into the spoils, turning IOS into a combination pyramid / Ponzi scheme of sorts, and you can probably guess how that story plays out.

What makes this piece evoke interest is the fact that it hails from what Patek Philippe experts say was one of the largest orders ever placed directly with the company. More than 1,000 examples of these Calatravas with custom branded dials, buckles, and casebacks were commissioned from the watchmaker. They were awarded to IOS associates whose sales totaled in excess of a million US dollars, speaking to the strength the firm once had and, ultimately, the indulgence that resulted in its demise.

Van Ham Kunstauktionen of Cologne, Germany is selling this Patek in an upcoming sale taking place on May 28. Its estimate has been set at €4,000 — €5,000. Get the full scoop here.

It’s always exciting to see a fresh-to-market watch go up for sale, in that they’re essentially equivalent to unearthed gems. Furthermore, they remind us there’s still more out there to be discovered, though the thrill is naturally even more so when the years have been kind to the example in question. Our next feature of the week is about as good as it gets if a Red Submariner is what you’re after, and collectors always are.

To some, this is just a Submariner, but to those that collect vintage Rolex, it’s a Mark II Red Submariner with a meters first dial. In comparison to the earlier Mark I variant (which is also meters first), the Mark II dial is characterized by thinner white text along with a bolder line of red text. The printed depth rating is the main source of change, with open sixes in “660,” and a taller, redesigned “f” to follow. As you’d expect, the best way to get familiar with all the different dials is to handle as many examples as you can, and if there’s one thing to be learned from doing so, it’s that this example is the cream of the crop.

Use of the word “barnfind” seems to be getting out of hand lately, so I’m going to describe this piece in more realistic terms. Even with a dirty looking bracelet, plus a scuffed and chipped acrylic crystal, it’s easy to see this is an outstanding example. That’s because it was probably only worn sparingly way back when and was never subjected to any attempts at polishing. Its appeal begins with sharply chamfered, original edges and a correct Mark 3.1 bezel insert fitted, but things get turned up to eleven upon inspection of its attractively patinated dial and handset. This is pretty much the custard color of aged tritium that most are after on their respective Submariner hunts. Just beware: Once you get a taste of vintage Rolex examples at this level, it might get harder to go for pieces in lesser condition down the road.

Collectible Auctions of Miami, Florida has this piece in their online sale, which ends on May 29. No estimate has been set, and the high bid currently stands at $ 4,000. Further details and the rest of the catalog can be accessed by following the link.

Broadly speaking, some of the most celebrated designs throughout history have achieved this status through their marriage of opposing styles. This is a notion I was introduced to by Jay Leno, who notably explained the Lamborghini Miura and Jaguar XK-E’s genius to be the product of masculine and feminine styling cues existing in harmony. Though the unwritten laws of car design are different from that of watches, I’d argue this same concept of opposing ideas yielding beauty does apply to horology, though perhaps in a less gendered way. If you’re still unsure, get a load of this next piece.

You’re looking at a Zenith chronograph which corresponds with the reference A273. In my opinion, it’s one of the strongest designs in the watchmaker’s history, thanks to its amply versatile nature. With its 37.5mm stainless steel case and three-register dial, it earns serious points in the sporty department, but through the use of thinner hands, applied markers, and printed typefaces, a perfect balance of class and functionality is struck. Having a column-wheel-operated chronograph beneath the caseback also earns it some points in the arena of appeal, and it’s Zenith’s KIF shock protected Cal. 146HP, no less.

Now for the ever so important nitty-gritty — its condition, which is quite good. Although there do appear to be a couple of minor spots inside the subdials at six and nine o’clock, its dial is otherwise clean and complemented nicely by an unpolished case. Also earning it a few brownie points is the presence of the original winding crown, which is missing on far too many examples I’ve seen over the years. The only noteworthy detail to consider is the start-stop pusher at two o’clock, which was seemingly replaced at some point during service. Having said that, it wouldn’t be too hard to track one down, and I’d even give you a hand if you ask nicely. All in all, a top-notch watch.

You’ll find this Zenith on Parisian dealer Sabi Watches’ site, where it’s listed with an asking price of €4,200. Hit the link to claim it as your own.

As I’ve said before, I’m not one to drool incessantly over Tiffany-signed watches with markedly cheaper, near-identical equivalents. It’s the signatures found on truly special watches, and unique variants of these signatures, that catch my attention. Movado is a curious example, in that many of their watches sold by the luxury retailer weren’t double-signed, but signed solely by Tiffany & Co. This is significant since it highlights the strength of the American brand by this point in history and the power dynamic brought to the table by Tiffany upon beginning to offer a new watch. When one such watch popped up for sale, I knew it belonged in this week’s roundup, and ultimately on one of your wrists.

Despite coming in on the smaller side at 33mm across, these have decent presence thanks to their 14K gold cases and ornate lugs, as seen on this example. While on the topic of the case, check out the engraving on its Cal. 115-cloaking caseback, which would indicate this was given to a 25-year employee of Horn & Hardart – the American company recognized for operating the first food service automats on US soil. Automats were vending machine-style restaurants, once regarded as rather futuristic, which could be commonly found throughout cities like New York and Philadelphia. Though the eventual rise of fast food would result in their decline, they’re still definitely worth a Google if in the mood for a dose of pre-weekend nostalgia.

Though I do get a weird rush out of bidding on an eBay piece with poor photos, high quality, detailed shots are always preferable, and this one’s got them. The seller went as far as disassembling the watch to display every pertinent facet you can imagine, revealing that the dial is in relatively good shape (save for a bit of spotting) and that all it really needs is a new crystal. Another interesting detail to note is the engraved roman numerals found inside the rehaut, which to my knowledge aren’t visible, but are instead intended for watchmaker reference upon assembling the timepiece post-service. Finishing a largely unseen component with Roman numerals is just so Swiss, reflecting their obsessively punctilious approach to manufacturing.

An eBay seller based out of Fort Worth, Texas has this piece listed in an auction that’ll come to a close at the crack of dawn on Sunday. At the time of publishing, the high bid stands at $ 500.

Deciding to focus your collecting efforts on military watches is a bold move, and a realm few jump into from the get-go. That’s because you’ve first got to be well enough versed in civilian variants to determine basic correctness before getting into another level of crucial complexity. Nonetheless, it’s far from rocket science, especially with the amount of valuable, pertinent data that’s now widely available. With that said, if you’re looking to get into the game and want a sure bet that’s all sorts of cool, this might be the watch for you.

Back in 1975, Breitling manufactured the Ref. 817 exclusively for the Italian military. That means there’s no Average Joe equivalent of this oversized reference. It’s a military watch through and through, and certainly has the looks to prove it, with a straightforward and highly legible, luminous dial. It’s that sort of purpose-built, no-nonsense design that makes these watches so desirable, which is only intensified by its E.I. (Esercito Italiano) service number-engraved caseback. I’ve always appreciated how Breitling chose to sign both its dial and bridge of the Valjoux 236 with the reference number 817, as arguably it furthers the utilitarian, issued feel of the watch while providing an easy way to spot less than correct examples.

If military watches are your area of expertise, you’ll know there’s nothing better than to buy a watch off the wrist of a once-enlisted individual. Well, nothing better except for when you buy it direct from Ministry of Defense themselves, who famously auctioned off 40 examples of the Ref. 817 for an undisclosed price in 2016. Since then, these pieces made their way into important collections, earning them newfound interest on a broader scale. This is one of those 40 watches, and a stunning one at that, with its original issued bracelet and a set of beautifully aged hands. And, before you ask, the two different colors of luminous compound on the watch are one hundred percent correct.

A collector on Instagram that goes by @sumnersdr is offering this example from his stash for $ 14,500. Slide into his DM’s if interested.