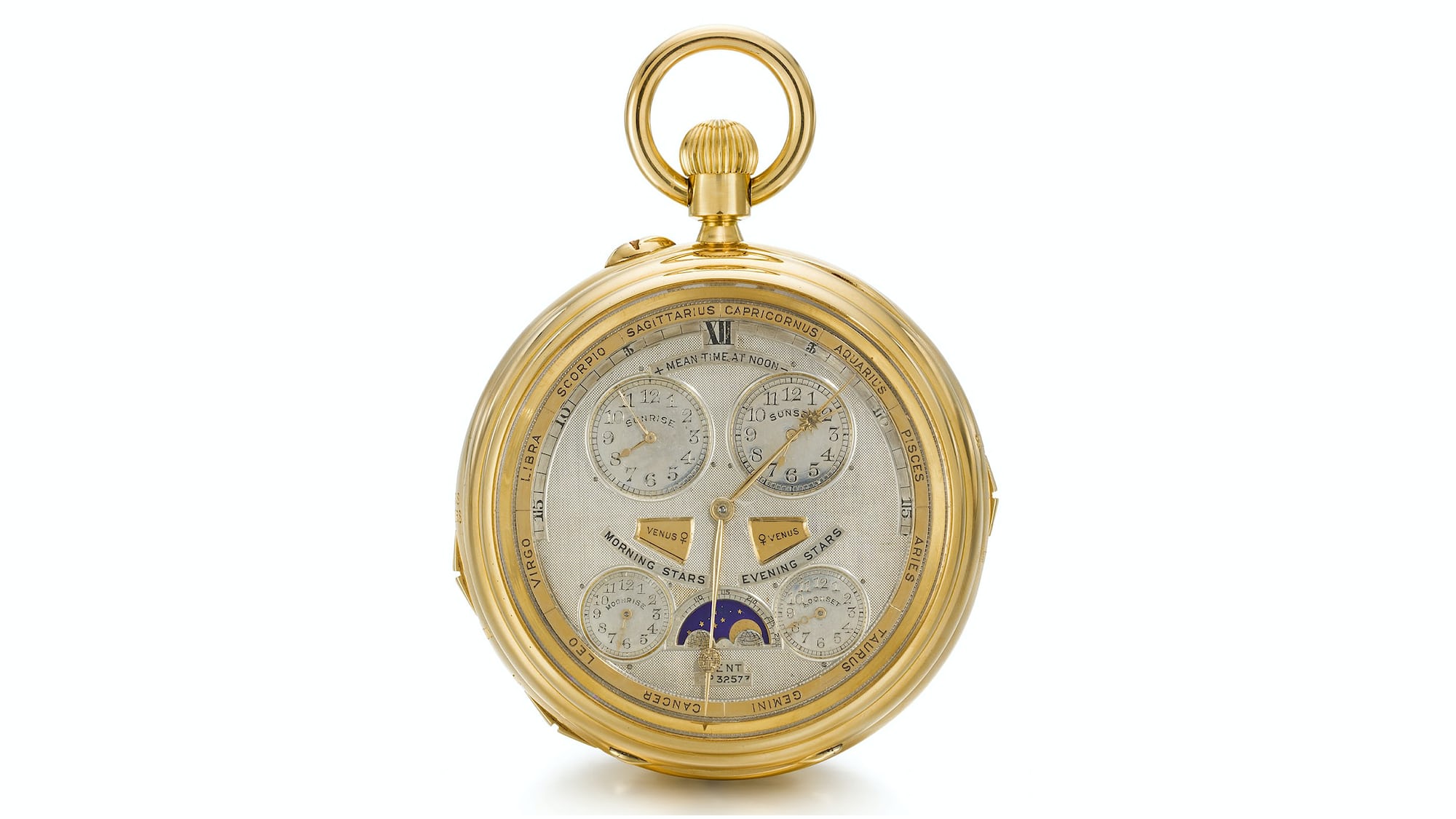 Earlier this month, we took a look at some of the more notable lots in Sotheby’s online pocket watch auction, “Abraham Louis Breguet, Horologist Extraordinaire,” which was the third installment in the sale of pieces from the Masterworks of Time collection. The auction has closed, with quite encouraging results for anyone who feels that pocket watches have for too long suffered from neglect in the eyes of many collectors, in the shadow of wristwatches.

It is easy to understand why wristwatches tend to outperform pocket watches – for one thing, the former are simply easier to show off to fellow enthusiasts, and for another, many of today’s most famous companies are much better known for their wristwatch than their pocket watch production (if they have any pocket watch production at all). However, the other side of the coin is that if you are interested in watches overall, it’s worth remembering that for most of the history of watchmaking, pocket watches were not just something to be found at the back of grandpa’s (or great-grandpa’s) desk drawer – they were, in fact, the only game in town, and were not widely replaced by wristwatches until World War II drove the nail into the coffin which World War I had constructed.

It is a truism of the auction world that with, very few exceptions, pocket watches underperform relative to wristwatches, but the results from Sotheby’s “Abraham Louis Breguet, Horologist Extraordinaire” auction hint that this may be changing, at least to some degree. One of the most remarkable results was for a watch which certainly deserved recognition – a “supercomplication” by Dent, which hammered for $ 832,240 (CHF 800,000) on an estimate of CHF 300,000-500,000. This is, says Sotheby’s, “a world auction record for a watch sold in an online sale and a record for a pocket watch sold online.” The watch, which was completed about 1904, has 19 complications and includes a moonrise-moonset complication (very rare in any sort of watch thanks to the complexity of the train and calculations for the train; I have never seen one in a wristwatch).

The watch is certainly a work of great horological art (the movement was made for Dent in Switzerland, by Léon Aubert of Le Brassus – obviously a complications specialist of the highest skill, to put it mildly), and Dent is an historically important name (the company made the great clock for the Palace of Westminster, after all). But it is still a cause for elation for a pocket watch enthusiast to see money being thrown at a watch that so richly deserves it. Whoever was the winning bidder, may you have joy of your prize, as they used to say in the Royal Navy.

Perhaps less unexpected was the price paid for lot no. 126 – a world timer, reference 605 HU, completed in 1947. No one is surprised by collectible Pateks hitting seven figures these days, but you generally see such numbers reserved for rarer wristwatches, and this particular reference has, in the last few years, tended to go for under $ 400,000 (when they come up for auction at all). Seven-figure results for enamel dial world timers tend to be the province of wristwatches like the ref. 1415; however, this particular lot, which had a reasonably accurate-seeming estimate of CHF 250,000-350,000, ended up hammering for $ 707,404 (CHF 680,000). This is not quite a record for this reference; the so-called “Star Dragon” 605 HU hammered at Phillips, in 2015, for CHF 965,000. In that case, however, a considerable premium seems to have been paid for its rarity, as it is one of only two examples of this reference to have a cloisonné dial depicting a mythological creature, rather than a geographic theme. I have often thought that Patek’s cloisonné dial world time pocket watches deserve to do better than the wristwatches (well, if an inanimate object can be said to deserve anything) as I think they make a much more vivid impression visually, and a watch like this ought to be enough to make anyone invest in a few waistcoats.

It’s ironic, although perhaps not entirely unexpected, that despite the auction being named for Breguet (with reason, there were 19 lots from the company), the highest result for any of the actual Breguet watches was under that of the Patek. Still, the price paid for lot no. 27, which is an extremely rare four-minute tourbillon, was nothing to sneeze at. On an estimate of CHF 300,000-500,000, the watch hammered for $ 582,568 (CHF 560,000).

It is worth mentioning, by the way, that even with Breguet’s name attached, there are still bargains out there for the astute collector who wants something from the master’s atelier but does not have the deep pockets necessary for some of the more obvious pieces. Breguet’s ruby cylinder watches, for instance, represent some of the very best timepieces to use the cylinder escapement (George Daniels praised their precision and noted that somehow Breguet seemed to wring better precision out of the cylinder than any other maker), and yet, they still go for a relative song.

One, lot no. 62, which was recorded, intriguingly enough, as lost or stolen in 1809 by the Breguet archives, went for a relatively paltry CHF 15,000 (admittedly on an estimate of CHF 7,000-10,000, but you know, still). Someone with a bit more than that to spend got something quite interesting from an historical standpoint – lot no. 89, which went for CHF 52,500, is a very beautiful perpetual calendar chronograph with foudroyante (when was the last time you saw one of those?) aperture displays for the day of the week and the month, retrograde date, and moon phase. It is a bit of a head-scratcher that the estimate was CHF 7,000-10,000, but what are you gonna do – these are strange times. The original client for the watch, Jean Dollfus, was also the original client of Breguet’s for a one-off perpetual calendar wristwatch which may be the first perpetual calendar wristwatch ever made. Now, given the low initial estimate, I am not saying the new owner necessarily got a bargain but – well, yeah, I’m kind of saying the new owner got a bargain, even at five times the original high estimate.

Finally, I am happy to report that another much-underappreciated maker got his due, at least to some extent. Lot no. 12, a pocket chronometer by the American maker Albert Potter, who did much of his work in Geneva and who is known for the dramatic and unusual beauty of his movement layouts, went for CHF 15,000 on an estimate of CHF 6,000-8,000. And again, as with the Dollfus Breguet, I think that despite going well over estimate, someone still got themselves a wonderful bargain on a watch with such enormous intrinsic horological interest that it towers head and shoulders over many other timepieces that go for hundreds of thousands at auction, purely because, for reasons which amount to historical accident, they appeal at the moment to extremely wealthy collectors.

Now, it is certainly premature to take these results as an indication of a pocket watch renaissance amongst well-heeled collectors – I don’t know that I have that much faith in human intelligence and taste, especially not this year – but this auction was a funny one all right, with some quite interesting outliers in terms of unexpected upside. You can’t get much more off the beaten track than a chatelaine watch from the mid-18th century, for crying out loud. I mean, who outside of a museum curator would care about such a thing; yet lot 109 went for CHF 100,000, on an estimate of CHF 8,000-12,000. Kinda makes you wonder what a Joanne Woodward chatelaine watch would go for, doesn’t it?

View all the results right here.