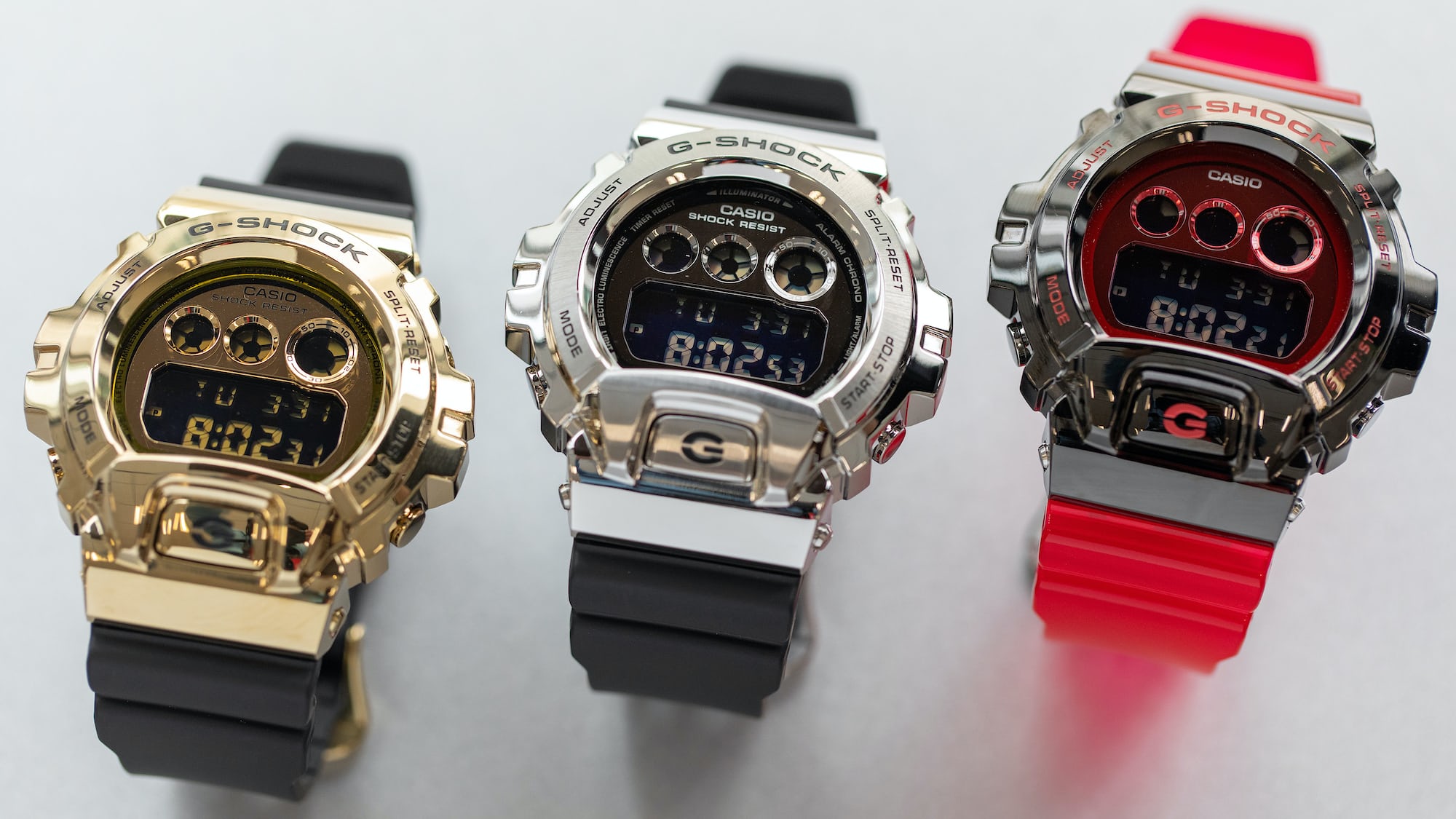 G-Shock has experienced several surges in popularity over the years since its debut in 1983. There is no doubt we are currently in one of those moments, which kicked off with the 35th anniversary of the 5600 line last year. The GM-6900, a large round digital watch with a unique three-eyed design, is marking its 25th anniversary this year. My very first watch given to me 25 years ago was none other than this three-eyed Casio. Its unique and very digital running seconds indicator (the left and middle eyes combined count up to ten seconds, then one segment of the 1-minute register on the right gets filled) and the additional functions like alarm and stopwatch excited me to no end. I didn’t even understand the concept of “anti-shock property” back then, but as a kid of a rather physically active generation, the watch became a perfect sidekick, and I still remember putting it on as soon as I got home from school every single day.

Fast forward twenty-five years, the 6900 re-emerges with a bit more mature metal bezel with a relatively minimalist design approach. Building upon the experience and success of the square-shaped DW5000 series, the bezel (really a cover rather than a bezel), which is made of forged metal, impressively recreates the three-dimensional presence of the original. The silver variant utilizes a satin and polished finish combination, which enhances the look and feel of the piece. (Of the non-special edition variations, this silver one is my personal favorite.)

That all being said, the initial impression upon actually trying the watch on my wrist was both positive for its excellent workmanship and also this strange sensation that I couldn’t immediately articulate. I think it’s the size. Twenty-five years ago, G-SHOCK was at the peak of its popularity in the U.S. Designing a model that speaks to this booming market was one of the missions for the 6900 series. This strategy worked well, and it is now a part of the G-Shock lore that the reimported 6900 watches became a smashing hit in the Japanese domestic market. You could say the overall size of this model is a bit too large for average Japanese users even by today’s standard. It’s one thing to wear an oversized casual watch in a resin case, and it is quite something else to wear the 6900 with an in-your-face metal bezel.

Does that mean this watch won’t fly in Japan? Well, quite the contrary. Just like iconic sneakers such as Air Max and New Balance 1300, the 6900 is a familiar face to the Japanese of our generation. The unchanged aesthetics from a quarter-century ago, executed in the material that I can confidently wear as an adult, make this watch an instant classic and an embodiment of ultimate nostalgia. Virtually everyone will recognize the iconic aesthetics of this watch and will understand that you, the wearer, very consciously chose to wear this watch with an intent. You could say that this watch individualizes its wearer.

All that aside, someone of my generation – readers in their 30s and 40s – I think will understand that the updates given to this GM-6900 are quite noteworthy. For example, the interchangeable straps — something that Casio has been implementing to the G-Shock line for about a year now — are present on this watch as well. You can simply slide the lever on the underside to swap the straps, and this feature definitely enables a new way to enjoy the watch.

I think choosing the color and finish from the three variants is going to be a tough decision. As I mentioned earlier, only the silver one features a satin finish on the bezel like the area surrounding the G-Shock logo, while the other two variants are fully polished. It’s also worth noting that the polished black IP coated version may look a bit plasticky from distance, and I think you’d be happier with the silver or gold variant if you want to fully enjoy the metallic nature of the watch. On the other hand, the black model is the only one featuring translucent red rubber straps; the other two variants stick with basic matte black straps. All three models use inverted black-dominant LCD screens, but the gold model alone features a gold-tinted information display (i.e., the positive part of the display).

Although the most versatile choice would likely be the silver version, all of them are priced below 30,000 yen (MSRP $ 180 – $ 230 in the U.S.), which is an amazing value proposition. With that price tag, I’d say it’s not too difficult to make a decision to go with, for example, the black and red model just to have some fun.

Lastly, I think we need to touch on the collaboration model that is going somewhat unnoticed. The watch in the photo below is a collaboration piece with American retailer KITH, which we reported here. This watch features a rose-gold IP coating, and the button at six o’clock bears the KITH logo. All markings on the bezel are left unfilled, and the overall presence is quite minimalistic. A positive LCD configuration also contributes to the clean look.

With some help from our friends in the industry, I managed to purchase this model for myself. There was a joy in hunting something rare, no doubt, but I was most definitely taken by a design that is decisively underplaying the branding aspect. The watch looks as if KITH happened to get their hands on a G-Shock tooling die and just proceeded to make some watches on their own, and I actually find this design quite playful. Obviously, this design execution was possible as a collaboration piece, and I wouldn’t expect this type of treatment in the standard lineup. That said, this almost mockup-like watch demonstrates the real strength of the 6900 as a true icon.