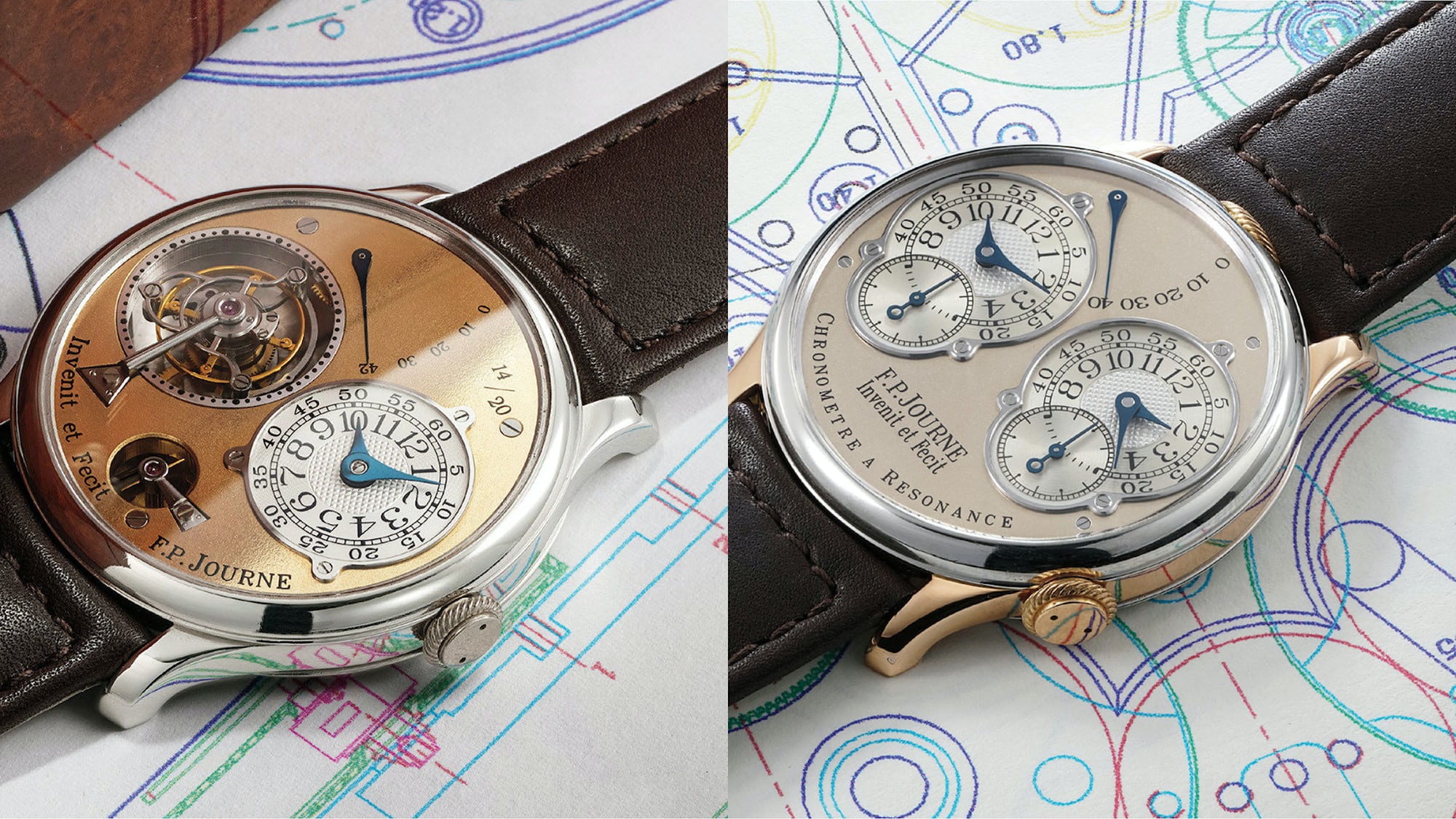 Today at Phillips Watch Auction XI in Geneva, a crowd gathered under a tent at Hotel La Réserve, as well as a record number of attendees (according to Phillips) watching online, got quite a show as two closely watched lots – a “souscription” F.P. Journe Chronomètre À Résonance and “souscription” Tourbillon Souverain, both with a single owner and in fact from a single collection, shattered their high estimates. The Chronomètre À Résonance, lot 49, hammered for CHF 1,040,000 ($ 1,097,182 at the time of publication) and the Tourbillon Souverain, lot 101, for CHF 1,400,000 (about $ 1,476,976). Bidding for both watches was very dynamic, and the results dramatically exceeded the high estimates, which were CHF 150,000-300,000 for the Tourbillon Souverain and CHF 80,000-160,000 for the Chronomètre à Resonance. In total, the two watches fetched CHF 2,440,000 (including buyer’s premium) or about $ 2,574,158.

We discussed these watches in May, and I think it is worth recalling some of the high points, just to clarify some of the context behind today’s result. Both watches are from the first series of each model, and both have had only one owner – the same owner, as a matter of fact, who is Parisian jeweler Lorenz Baümer. Both watches were made available to collectors on a souscription (subscription) basis. The Tourbillon Souverain dates to 1991, and it was the first tourbillon wristwatch to also incorporate a spring-powered remontoire d’égalité – a constant-force mechanism originally developed by John Harrison for his experimental marine chronometers. The Chronomètre à Resonance was introduced by F.P. Journe in 2000, also under the souscription system.

Like the Tourbillon Souveraine, it was a major historical first; prior to its introduction, resonance timepieces had only been made in very small numbers (by Antide Janvier and A. L. Breguet, among others), and no one had ever put the system into a wristwatch before. In both cases, the watches are not only of great complexity, but also demand much of the watchmaker in terms of skill in adjustment and general setting up. The Chronomètre à Resonance, for instance, has two balances which must be adjusted to run within a very close tolerance for daily deviation in rate for the resonance effect to occur.

You have, therefore, two watches which played major roles in horological history, and which represented major firsts in the history of the wristwatch. Moreover, F.P. Journe’s watches adhere to a fairly strict design language – Journe famously believes that, in general, his watches should fall within a classical range in terms of size, and his watches are usually comparatively quite thin, set next to watches of similar complexity from other makers. There are, in Journe’s watches, some elements of watchmakers who have influenced him – Breguet especially – but there are also many aspects of his watches which, from a design standpoint, reflect no vision other than his own. Without this quite canny combination of very recognizable and innovative design, with the overall spirit of one of watchmaking’s greatest past masters, the watches would simply be remarkable mechanisms, without the power to excite equally in both aesthetics and mechanics.

Million Dollar Babies: How They Got There

These constant elements in Journe’s work have meant that, over the years, a small but very devoted group of collectors has followed his work very closely and, in retrospect, have helped prime the pump for today’s results. In May 2015, Ben Clymer looked at some of the arguments for speculating that F.P. Journe watches would continue to rise in both popularity and value. Five years ago, he noted, “Journe watches have never exactly been auction house darlings – with modern pieces typically selling for a fraction of their current retail prices. That, of course, is no way to measure the success of a watch, but resale value is something that many collectors simply can’t ignore – if you put money into something, you want to know you can get money out of it. This week, however, a few F.P. Journe pieces sold at auction well above what one might expect, and we are beginning to see that, like special pieces from Lange, special Journe watches can also do quite well on the public market.”

The article noted that unusual or unique Journe watches might indeed be expected to command higher and higher prices. In 2015, the article observes, CHF 106,250 for a Chronomètre à Resonance (at Christie’s, at “Important Watches” in Geneva) was a surprising and noteworthy result for a watch which, at the time, often sold for, “… the high 40s through low 60s depending on age and configuration.” However, much higher auction results were not far behind.

One quite steady symptom of the potential for F.P. Journe’s watches to achieve auction results such as those seen today has been hammer prices at the Only Watch benefit auction, which has raised many millions of dollars for research into muscular dystrophy. At Only Watch 2015, an F.P. Journe Tourbillon Souverain Bleu hammered for CHF 550,000. This was followed by a hammer price, in 2017, of CHF 1.15 million for a unique Journe split-seconds chronograph, and again, in 2019, and again at Only Watch, the Astronomic Blue hammered for CHF 1.8 million. The appetite for unusual and important Journe watches was very manifestly there, and while generally the seven-figure results were confined to unique pieces – in 2017 and 2019, unusual and sophisticated complications as well – the stage was set for a broader appreciation of non-unique pieces as well.

Rise Of The Souscription

Journe’s first series – which is to say, souscription series – Tourbillon Souverain and Chronomètre a Rèsonance watches have always commanded respectable results at auction but have not, historically, risen quite so dramatically in price as they might have (at least, not until today). In fact, one of the reasons today’s results were so surprising – very pleasantly surprising for the consignor, I am sure – is that they represent an increase in an order of magnitude for auction results for these watches. Also in 2015 (the year we all should have started to pay closer attention to these watches, apparently), there was already a symptom of this, with lot 212 (a souscription Tourbillon Souverain) at Phillips Geneva Watch Auction: two hammering for CHF 269,000 on a high estimate of CHF 120,000. This was the first souscription tourbillon to come up for sale publicly ever, that I am aware of.

This result, while impressive for 2015, at first seemed to represent a new ceiling rather more than a new median. A year-2000 first series Chronomètre à Resonance hammered at Christie’s in Hong Kong last year for HK 2,000,000, or about a quarter of a million dollars. However, another result from 2018 at Phillips was an indication that seven-figure results, under the right circumstances, might not be out of sight, with a souscription Tourbillon Souveraine hammering for CHF 468,000 on a high estimate of CHF 184,000.

Even for someone watching remotely, the excitement in the room was palpable when the first souscription watch (lot 49, the Chronomètre à Resonance) came up. Bidding was rapid-fire and climbed rapidly, often with large increments, through low, mid, and high six figures, with a number of very serious collectors clearly willing to part with enormous sums for a chance at owning a watch which, not only for Journe collectors but also for serious enthusiasts in general, has that rare combination of horological sophistication, historical importance, impeccable provenance, and rarity which so often adds up to impressive results. The high estimate for the lot of CHF 165,000 seems a bit conservative in retrospect, but nonetheless, the final hammer of CHF 1,040,000 is unprecedented for a series-produced Journe Chronomètre à Resonance.

The long pause between the two tranches of independent watches in today’s auction merely served to increase the sense of anticipation, and by the time lot 101 came up, it felt almost a foregone conclusion that it would reach seven figures as well. It was still a rather heady experience to watch the bidding – as with for lot 49, very dynamic and with very aggressive increments at times – climb towards the magic CHF 1,000,000 mark. With a final result of CHF 1,400,000, Aurel Bacs and Phillips closed out the two Journe lots with results which may stand for some time as new benchmarks, as these early souscription watches do not frequently come on the block.

Incidentally, if you like drama and watches (and who doesn’t), I would strongly recommend tuning in to the second installment of this auction tomorrow, where there may be some very strong action around several of the lots from Jean-Claude Biver’s collection. You will also, of course, be treated to the indefatigable Aurel Bacs; I have not watched him on the podium in some time and had forgotten just how much his enormous energy keeps the proceedings entertaining. (I have in my notes that despite the muggy atmosphere in Geneva earlier this afternoon, he didn’t take his first sip of water until four hours, six minutes into the auction.)

The auction, despite travel restrictions, reached a very wide audience – according to Phillips there were bids coming in from as many as 67 different nations, with 642 bidders from the US, a “huge number” from Canada, and excellent representation from Europe as well as very strong participation from China (including Hong Kong) – there was interestingly strong participation from New Zealand, including one bidder who was willing to compete very seriously for the Journe pieces, into the high six figures.

These results represent, I think, a couple of interesting possibilities. First, of course, it’s great news for F.P. Journe in terms of building perceived value for his exceptional watchmaking, which in terms of horological merit has long since deserved to command such premiums. Secondly, it makes me wonder about possible shifts in the center of gravity of horological collecting. The roost has been ruled by just a few major brands, in terms of not just high prices but increasingly high results, for many years now, but there are signs that collectors are beginning to show increasing interest in independent watchmaking. Shanghai Watch Gang co-founder Austin Chu, for instance, who has, at 23, already built a major collection and who has 114,000 followers on Instagram, recently told the New York Times that, ” [independent brands are] the future for me … I really applaud them for keeping the watch industry creative and fun.” Chu specifically cited MB&F, H. Moser & Cie, and De Bethune, but this may be symptomatic of a gradually increasing sense among collectors that independent horology has much to offer, not only in terms of feeling more personally connected to the creation of watches than is sometimes possible with the established blue-chip names, but also in terms of building a more personally expressive and simply more interesting collection.

See the catalogue for Geneva Watch Auction: XI right here, and if you’d like about four hours of terrific viewing, tune in tomorrow at 8 AM EST for part 2.