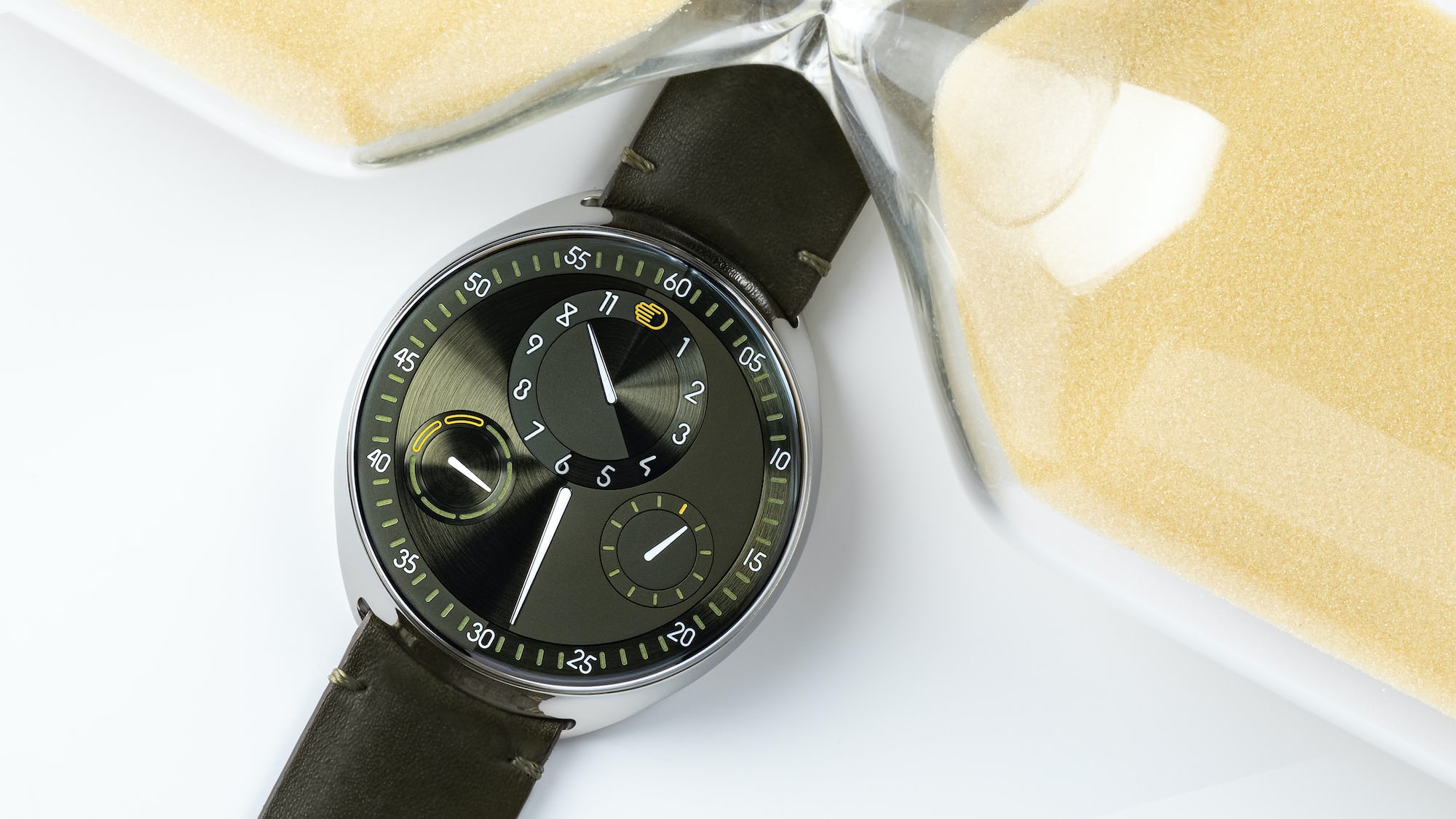 Ressence is ten years old this year, and despite the tendency for anything successful in the watch industry to spawn a raft of imitators, there’s still no other company doing what Ressence does (and given how well Ressence founder Benoît Mintiens has staked out the territory Ressence occupies, I doubt there ever will be). The basic idea behind the company’s watches hasn’t really changed all that much since the first Ressence debuted, but the mechanisms and designs have continued to evolve in a fashion that has put to rest any doubts one might have had at the outset that Ressence was a one-trick pony, and the latest Ressence – the new Type 1 Slim X – shows yet again just how versatile the basic Ressence concept really is. “X,” of course, is the Latin character for ten, and the Type 1 Slim X is a limited edition intended to celebrate the company’s 10th anniversary.

Generally, Ressence watches have had a form factor somewhat reminiscent of a pebble worn flat, smooth, and round by the passage of water – and they have offered the same pleasant feel in the hand as a water-worn pebble as well. The smooth, rounded surfaces are both a tactile companion to, and a natural outcome of, the Ressence display system, which the company calls ROCS – the Ressence Orbital Convex System. The ROCS is a highly complex mechanism which consists of a series of nested convex disks, mounted on satellite gears, which rotate around a central axis. The disks, thanks to the convex surface in which they are mounted, are angled slightly with respect to a horizontal plane – the hour disk, for instance, is inclined about three degrees.

One has the feeling, looking at a Ressence watch, of seeing an animated drawing – the effect is perhaps at its most extreme in the oil-filled Ressence models, in which the ROCS chamber is filled with oil and physically isolated from the going train. The refractive indexes of the oil and the sapphire crystal are the same, so the time satellites appear to float on the crystal’s surface. However, Ressence has also played with depth in some models, openworking the dial so as to make the ROCS visible (as in the limited edition for Dubai Watch Week, as well as the HODINKEE Ressence Type 1H Limited Edition).

The classic Ressence pebble-like case offers the same pleasing feel as a pocket watch case (one of the advantages the late George Daniels felt pocket watches had over wristwatches) but the visual and cognitive experience one has when wearing a Ressence watch is unlike that produced by any other watch. To wear a Ressence watch is to understand just how fundamentally similar most experiences of telling the time actually are – there are, after all, very few watches indeed which depart from the basic formula of an hour and minute hand on the same axis at, more or less, the center of the watch, with some exceptions that fall under the broad classification of regulator dials (and, of course, mechanical or electronic watches that use a digital display). Wearing a Ressence for the first time can be an unsettling experience – the orientation of the satellites changes continuously throughout the hours and days (the entire ROCS carrier rotates once per hour, driven by the minutes pinion of the going train), and the kinetics of the display system seem to emphasize the transitory nature of the experience of time, in a way that a conventional watch display does not.

Ressence occasionally comes under fire for its use of ETA movements as the basis for its watches. The subject of when and if in-house movements are essential to an haute horlogerie watch is a complicated one, but it bears repeating that in-house is not, per se, a guarantee of interest, or quality, or reliability. It’s also worth noting that the degree to which supplied movements are further modified should weigh very heavily in evaluating whether they are appropriate or not. The ROCS is not, to put it mildly, on the same level as using (for instance) a 2824 with a custom rotor, and as with many things horological, what you do with the movement is at least as important, if not more so, than whether or not it is in-house (the Lemania 2310 in its haute horlogerie manifestations is one example; the Valjoux 7750 in the IWC Grand Complication Il Destriero Scafusia is another).

The simplest version of the ROCS, the ROCS 1, adds over a hundred additional components to the parts count. Complexity, of course, is not an end in itself, nor is greater complexity necessarily synonymous with better watchmaking, but I bring the number up to show just how much further Ressence has gone in adding watchmaking interest to the base caliber. It is perhaps easier to appreciate how much additional watchmaking value is present when looking at an exploded diagram of the movement. In the image below, the base caliber is the small disk to the far right; everything else is from Ressence, including, of course, the two rings with ruby rollers which support the rotation of the ROCS. The version of the ROCS 1 used in the Type 1 Slim X uses the 2892-A2 as a base, and the fact that this is a fairly flat caliber (25.60mm x 3.60mm) means that, even with the addition of the ROCS, the watch is relatively thin at 42mm x 11mm. One of the challenges in designing the ROCS was of course getting a reasonable power reserve out of the movement despite the additional load, and the running time on a full wind for the Type 1 Slim X is 36 hours. As the automatic winding system has been retained, this should be a non-issue if the watch is worn daily.

As with all current production Ressence watches, the Type 1 Slim X has no conventional crown to interrupt the contours of the cases. Instead, there’s a folding lever set flush with the caseback.

The case of the Type 1 Slim was a bit of a departure for Ressence. As we’ve seen, Ressence watches typically have smoothly convex case profiles; the Type 1 Slim cases, on the other hand, are concave along their flanks, as well as elongated slightly at the lugs, and the result, thanks to the location of the lugs along the lower edge of the case, is a watch that sits very flat on the wrist and which is very comfortable to wear. This is aided in the case of the Type 1 Slim X by the fact that the case is in titanium, and despite the considerable additional parts count thanks to the ROCS, the watch is quite light – just 67 grams (as opposed to our standard reference for watch weight, the SKX007, which comes in at 180 grams as seen in our weigh-off from 2016).

The new feature of the Ressence Type 1 Slim X seems somewhat minor at first. The main minutes satellite and the hour satellite have been given two finishes, divided along the vertical axis of each satellite (as defined by the hour and minute indicators). On one side, there’s a matte finish and on the other, a brushed circular finish. The two halves match up just twice a day, at noon and midnight, at which moment – and just for a moment – the dial is completely symmetrical.

This may appear a relatively trivial addition to the design, but in practice, it very much changes the experience of telling the time with the watch. The cycling in and out of synchronization of the two halves of each satellite seems to act as a kind of counter to the constantly changing appearance of the dial, and provides a counterpoint to the hourly transformation of the appearance of the watch on the wrist. The slow frequency of the cycle has led Ressence to compare the watch to an hourglass, and while I think the simile is apt, an hourglass inevitably reminds us of the forward trajectory of time’s arrow – not for nothing is the running out of the sand in a glass a metaphor for death, and the hourglass a symbol of mortality. The Type 1 Slim X, on the other hand, does not so much seem to arrest the flow of time, as to act as a reminder of its circularity as well – the design grounds the rotation of the ROCS in the slower, more leisurely pulse of day to night and back again. (One rather subtle element of the design is that the number 10 on the hours satellite is both a stylized letter X and a representation of an hourglass.)

The new finish on the ROCS satellites changes the experience of the watch much more dramatically than you’d expect – certainly quite a lot more than you usually see from a change in dial finish.

Ressence watches are, in certain respects, genuinely revolutionary, but I think they also succeed in one aspect with which groundbreaking horological design struggles, and that is versatility. The ROCS is a most unusual mechanism in horology, but in its relative spareness, it also appeals in spirit, if not in form, to classical watchmaking values. It is there, I think, that Ressence has a very strong connection to traditional horology, and it’s also the reason the watches are as versatile as they are. The Type 1 Slim X is a watch that, thanks to the synchronization of the finishes on the satellites, asks to be experienced every day, and its harmonious proportions very much lend themselves to daily wear.

The Type 1 Slim X is a limited edition of 40 pieces, and the price is €19,500. The question will be raised, “Is it worth it?” To simply say, “It is if you can afford it and you think it is,” may be factually correct, but I think there is more to it than that. How much is good design worth? How much is exclusivity worth, bearing in mind that here exclusivity doesn’t mean so much restriction in numbers (although 40 watches certainly aren’t a lot) but rather a horological and cognitive experience found nowhere else in modern watchmaking? Certainly, this is not a watch that appeals to conventional watchmaking values, but I think Ressence at its best succeeds in articulating other values which are fresh and interesting exactly because they do not appeal to hundreds of years of tradition, but rather to the power of the human imagination to excite and to rethink something that we take so much for granted – the conventional manner of telling the time – that we have ceased to notice that it is conventional at all.