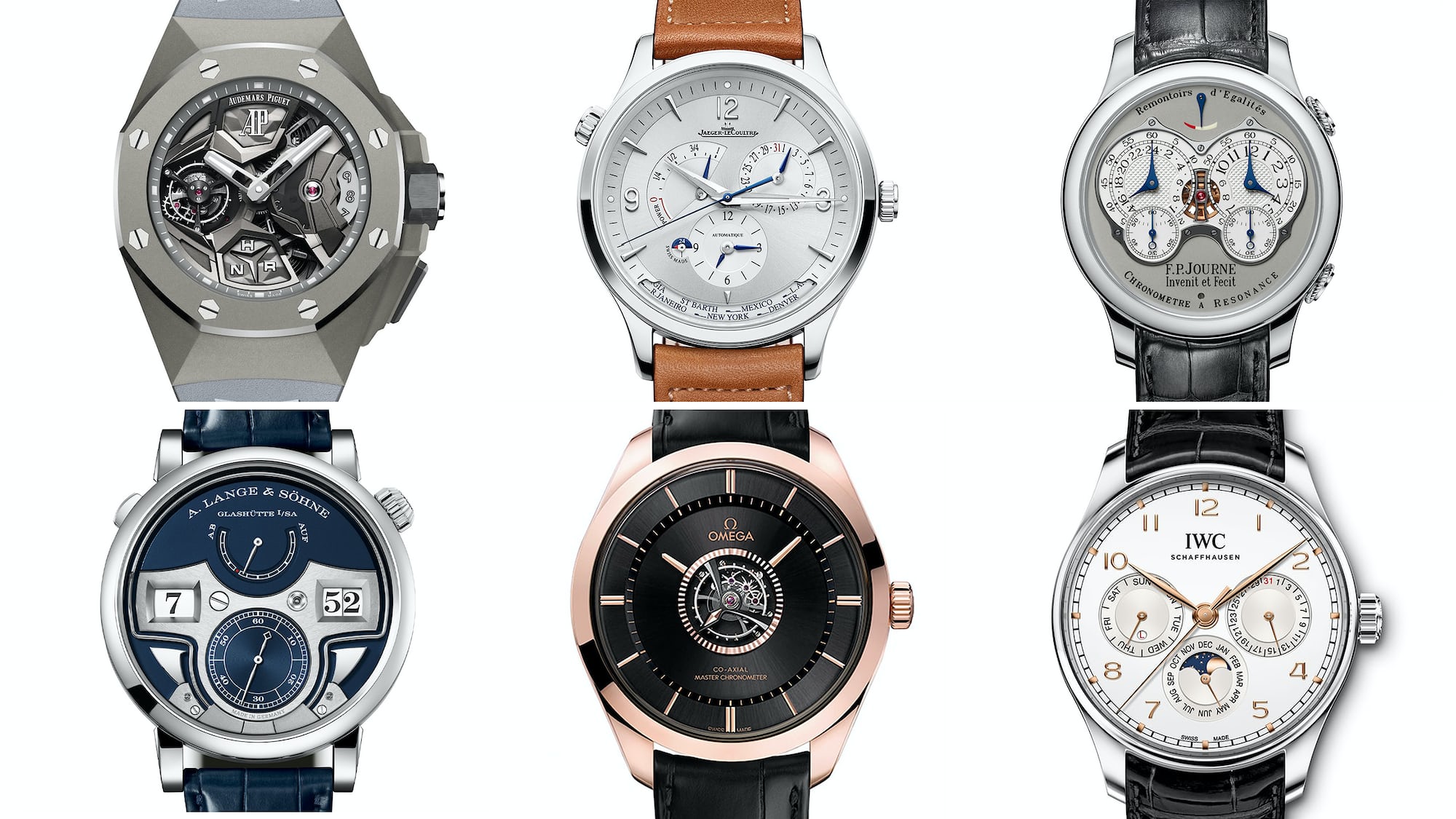 One of the more interesting features of This Year In Watches is that, despite the more or less complete disruption of normal communications practices and product release schedules, there have still been quite a few new complications released. In some cases, these are design updates to existing mechanisms; in some instances, technical updates. Completely new technical innovations are a relative rarity, but this is largely due to the fact that the basic vocabulary of complications is well-established, from the simple and annual calendars all the way up to things like rattrapante chronographs and minute repeaters. Our editors have taken a close look at the many complicated timepieces which have debuted this year and chosen their personal favorites. Read on to find out who chose what and why.

Ever since the legendary Kurt Klaus devised a perpetual calendar that could be set via the crown and built upon a Valjoux 7750 base, IWC watchmaking has been associated with this high-complication. The company has offered perpetual calendars across a number of its product families, from the Da Vinci, to the Pilot’s Watch, to the Ingenieur, and even the Aquatimer. But my favorite IWC perpetual has long been the one in its stately Portugieser case. Thing is, at more than 44mm in diameter, it definitely stretched the limits of what I typically went for given my 7-inch wrist. Of course, the Portugieser is meant to be a big watch and was originally conceived to be powered by a large pocket watch movement, but I just didn’t think I could pull this particular version off.

I actually found it extremely difficult to make a choice in this category simply because, against all odds, there has been, I think, quite a lot of interesting complicated watchmaking this year. Some of it comes with a very stiff price – Vacheron has produced two really amazing Les Cabinotiers pieces (the Ode To Music and the La Musique Du Temps Tempo, both striking watches) to pick just two from the higher end. At a much less costly price point, and probably more practical for everyday wear, Jaeger-LeCoultre gave us a wonderful new Memovox – the Master Control Timer.  Recently, we heard from Parmigiani Fleurier, who have produced a new annual calendar chronograph, the Tondagraphe GT – a pretty unusual complication in a beautifully designed watch, which they are offering at a rather enticing price to boot.

For me personally though, one of the most exciting, and even moving, new complications was from Omega. Omega is not the first brand on anyone’s mind when the subject of tourbillons comes up, but they are very much a part of the company’s history (Omega made some of the very first wristwatch tourbillons, after the Second World War). I have a long personal fascination with the central tourbillon going all the way back to when it was first launched, in 1994 – I hasten to add, not as an owner, but the central tourbillon is a rare thing, and there is something about the combination of elegance, technical prowess, and cavalier disregard for practicality which the central tourbillon exhibits that I find irresistible.

This is not to say, however, that the De Ville Central Tourbillon, in the Master Chronometer version, is a slouch in the performance department. Rate stability according to Omega Vice President Jean-Claude Monachon is excellent, which I always hope for from the tourbillon (if only to keep Breguet from spinning in his grave) but do not particularly expect at this point in horological history. Of course, the watch is also, per METAS and Master Chronometer certification, essentially immune to magnetism (METAS certification guarantees resistance to fields of at least 15,000 gauss which I think represents the upper performance limit of testing equipment, rather than an absolute limit). This is an extraordinary feat in any case, but doubly so for a tourbillon wristwatch, which needs to have not only regulating organs that are amagnetic, but a tourbillon carriage as well.

The De Ville Central Tourbillon has been an aspirational watch for me for many years, and in the newest version, it’s a watch I aspire to even more strongly. Probably given the price, I am just going to have to right on aspiring, but hey, per ardua ad astra.

Not to play out the old adage that Jaeger-LeCoultre has long been considered the watchmaker’s watch, but looking at offerings such as this year’s Master Control Geographic, I see new meaning being brought to this idea. Of course, this reputation was born out of the reality that JLC was, at one point, providing movements to some of the very top watch brands in the known universe. However, you can also make the argument that the brand now produces watches which endear themselves to watchmaking itself – the kind of watch a watchmaker would wear and appreciate. Turning to the topic at hand, does a new-generation movement resulting in a longer power reserve constitute a new movement? Well, I am going to say that it most certainly does, and much of my reasoning behind taking this position is that it gives me a valid excuse to talk about the new Master Control Geographic.

What I like about this particular complication – powered by the new generation Jaeger-LeCoultre Calibre 939 – is that it provides just enough intricacy while maintaining relative ease-of-use. This is not a world timer, but the movement features a city disc beneath the 6 o’clock marker which is operated via a secondary crown (crown turning operation = easy). There is also the dual-time functionality which is neatly exhibited on a sub-dial just above 6 o’clock which illustrates the second timezone in a conventional hours and minutes configuration, as if it were a mini clock all it’s own. There is a 24-hour day/night indicator, a power reserve meter to reflect the newly enhanced 70-hour power reserve, and a classically exemplified pointer date sub-dial. So much of the watch’s design screams 1960’s Jetset, and that is made possible by the design and orientation of the complication itself. This is high watchmaking, but simplified – a fine movement inside of a sports watch frame. If you couldn’t tell, I am pretty taken by this one and would love to experience it in the metal sometime soon.

This isn’t a “Favorite New Complication That You Can Actually Buy” round-up, and it doesn’t hold me to the constraints of reality, so why should I play by those rules? Besides, the Zeitwerk Minute Repeater is almost too bold and too complicated to be a real watch in these modern horological times, anyway. But it is, and it’s an absolutely fascinating exercise in horological innovation. New this year with a blue dial, the watch features a digital time display that rallies against traditional hands in favor of something that’s perhaps closer in appearance to the displays we’re now used to on the screens of digital devices.

The Zeitwerk feels like it comes from a parallel universe where timelines have gotten mixed up and ancient Teutonic traditional aesthetic mingles with techno-wizardry that we’re still a few decades away from – a world that’s deeply entrenched in the ways of digital, but some vestiges of a bygone analog past crop up in unexpected places, like this watch. It’s no wonder more enthusiasts don’t talk about the Zeitwerk when they talk about Lange, it’s just simply too far ahead of its time in many ways. To get a better idea of what the watch is all about, take a look at Ben’s experience with the original Zeitwerk Minute Repeater here, and here for a look at the first time a Zeitwerk with a minute repeater (a decimal minute repeater, no less) complication came onto the scene.

It’s funny: In thinking about this question, I realized that all my favorite complications of 2020 are iterations on watches that previously existed. There’s the Krayon Universal Sunrise-Sunset, the new A. Lange & Söhne Lange 1 Timezone, and the Grand Seiko SBGJ237 – all new, refined takes on watches that we’ve seen before. However, there’s one that clearly takes the cake for me: the 20th-anniversary re-imagining of the F.P. Journe Chronomètre à Résonance. The Résonance has been a longtime favorite of mine, combining technical prowess with an incredible symmetrical design that is unlike anything else out there. It’s a real thinking person’s watch through and through.

This year’s new model, as Jack detailed in his incredible story introducing the watch in April, keeps the basic resonance principles and pushes them even further. The movement has been reworked to include both a remontoire and a differential, taking the concept of precision timekeeping close to its logical conclusion. I love the purity of this pursuit and how F.P. Journe goes about solving problems in ways that are simultaneously smart and beautiful. Even little changes, like moving the second crown from between the top lugs to the side of the case, make the watch easier to wind and wear, improving the user experience in a significant way.

I’m far from the only collector obsessed with the Résonance, and I fully expect this new version to become just as legendary as earlier versions. Speaking of which, the recent, record-setting result at Phillips makes this feel extra timely and makes the slightly steep price tag on this Résonance look like a deal.

Well, I’ll tell you what, Cole and I are certainly feeling fancy today. And since the good Mr. Pennington showed little restraint as he shot deep into the six-figure price point with his charming pick, please allow me to get a bit conceptual. Looking a bit like a stealth fighter for your wrist, my favorite complicated watch of 2020 is the new and more low-key expression of AP’s Royal Oak Concept Flying Tourbillon GMT. In what is essentially a more muted grey-on-grey variant of a similar model from 2018, this is a limited edition (only 30 pieces) made for Arije, one of Audemars Piguet’s retailers in Paris, France.

This modern 44mm chunky boy has an angular and exciting titanium case, a grey rubber strap, and a wild hand-wound movement that offers a flying tourbillon and a GMT function (still gotta be me). While certainly a bold choice, it’s also an exciting and undeniably modern watch with a price tag to match its ample complication and specifically limited production.