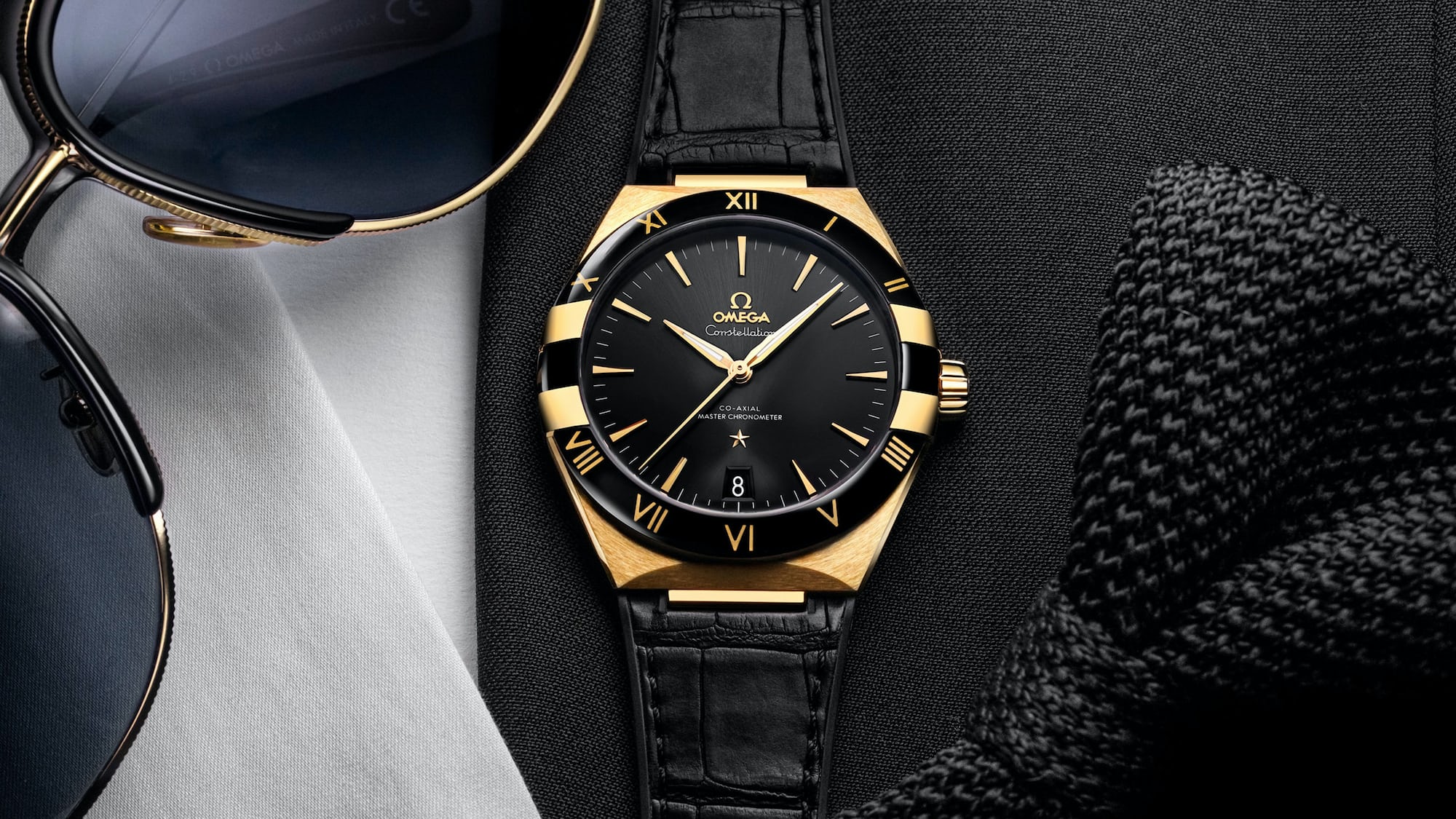 The Omega Constellation family of watches is one of the oldest in post-World War II Omega production. Although it is superseded in visibility by the Speedmaster and Seamaster watches, the Constellation pre-dates the Speedy and came out only a few years after the first Seamasters, with the first Constellation watches launching in 1952 (there is an excellent synopsis of Constellation history by Maria Doulton, over at Monochrome). Those watches, with their distinctive pie-pan dials, are among the most aristocratic timepieces any company has ever made, and to me, they are one of the great dress-watch (whatever that is) designs of the last 70 years of wristwatch manufacture. The Constellation has since then undergone several metamorphoses. One of the most significant was the incorporation of new timekeeping technology, and the first quartz Constellation models – three of them – debuted at Baselworld in 1970.

In 1982, Omega designer Carol Didisheim, who started at Omega in 1980, came up with a model whose descendants are still with us today. The Manhattan debuted a number of distinctive design features. The case was built around the ultra-thin quartz caliber 1422, and the watch had an integrated bracelet with rounded interlinks, as well as a dial with Roman numerals which were not applied to the dial itself, but which were actually painted on the underside of the crystal in order to reduce height. Perhaps most notable, however, were the four griffes, or claws, which were located at 3:00 and 9:00. Though the assumption nowadays is often that these are decorative, they were in fact technical – a solution to the problem of how to make the watch thinner by eliminating the bezel.

The claws were actually clamps, secured at the underside with screws that ran through the caseback, and they were there to help compress the gaskets at the caseback and glass in order to improve water resistance. The idea to use the claws to hold the glass in place came to Omega’s then product director, Pierre-Andre Aellen, during his morning shave, when he noticed that his unframed bathroom mirror was held on the wall with eight claws (according to an interview with Didisheim by Constellation expert Desmond Guilfoyle).  That they were visually distinctive didn’t hurt either, and although they are no longer set above the bezel in the newest Constellation models, they are still present as visual elements, set into the ceramic bezel of the 41mm models. The original Manhattan also featured a hinged link, integrated bracelet – in fact, a Constellation model from 1969, ref. BA 368.0847, has a patent associated with it, granted to Omega’s Pierre Moinat several years earlier, for what may well be the first true integrated bracelet wristwatch. Though the Manhattan had a quartz movement, it was of high quality – the Omega caliber 1422, which was chronometer-certified, ran in 7 jewels, and featured a rate trimmer for fine adjustment.

Omega has already announced refreshes to the Constellation in 36mm and 39mm models, and the same aesthetic updates applied across those lines are present in the new 41mm models as well. These include a new handset whose profile was, according to Omega, inspired by the Manhattan skyline in general and the 1 World Trade Center Freedom Tower, and indeed, the tapered hands are reminiscent of the elongated triangular facets of the actual building – an homage also to the original Manhattan Constellation model from 1982, whose design has been the foundation of the Constellation models ever since.

The new 41mm models also retain the claws, or at least, the appearance of the claws, which are probably the most love-it-or-hate-it element in the Constellation watches. As we have mentioned, in the original Constellation Manhattan, the claws were a technical feature, and in the current collection, including all the new models, they are decorative rather than practical elements, which serve to visually connect the watches of today with the original from 1982. Whether or not you care for them probably has at least a bit to do with whether or not that link is meaningful to you. I happen to like the connection to that era, which might have a lot to do with where I am situated along life’s journey, to be euphemistic; but I still like it nonetheless.

The claws in all three sizes in the new Constellation models all now lie flush with the bezel (they protruded noticeably past the bezel edge in the preceding Double Eagle models), and I think they work best when they are in a contrasting material. This is the case to some degree in all the new 41mm models, and I think they are at their most attractive in the watches which sport ceramic bezels and gold claws (I count a total of four new 41mm models that fit that description). The yellow-gold-cased model with the black ceramic bezel is, I think, extremely handsome – black and gold is a very aristocratic combination, and it gives this particular model an almost Art Deco feel, which is a nice counterpoint to the ’80s design language which is present in the collection as well.

The ceramic bezel is fairly technically challenging, as the ceramic material changes physical dimensions when fired, and the claws need to fit seamlessly into their recesses. Once the bezel’s fired, depressions for the Roman numerals are laser-cut into it, and then they’re filled with Omega’s Ceragold. The entire bezel is then brushed, and since the ceramic is harder than the gold, the numerals pick up a brushed matte finish while the ceramic remains untouched.

The movement is Omega’s caliber 8900, or the 8901 depending on the model – they are identical technically; the 8901 is the version with a gold rotor, and it’s used primarily in precious metal Omega watches. Both run in 39 jewels, with a 60-hour power reserve; they use co-axial escapements and are Master Chronometer certified, with free-sprung, adjustable mass balances, silicon balance springs, and an ability to resist magnetic fields as strong as 15,000 gauss.

The co-axial escapement and Master Chronometer certification are becoming more and more ubiquitous across Omega’s entire production, with a few exceptions including some quartz models and, of course, the Moonwatch. These are easily some of the most advanced movements being made today from a technical perspective. It’s easy to take what Omega does from a technical watchmaking standpoint a bit for granted, but their Master Chronometer movements are the most advanced mechanisms Omega has ever made by a considerable margin. They offer a long-term precision in timekeeping, as well as a robustness and durability, which is approached by very few of the company’s competitors. I don’t think that the co-axial escapement (or many of the other technical enhancements in the movements) necessarily sell all that many watches – it is a truism of luxury retail that the more you have to explain, the less likely you are to make a sale – but I think Omega deserves a lot more credit than it generally gets for its consistent commitment to technical excellence.

The new 41mm models start at $ 5,850 for steel on rubber with a steel bezel. All other models have ceramic bezels, and with a ceramic bezel, the steel model is $ 6,500; steel and gold models are $ 8,650, and prices go up to $ 20,400 for the full-gold models. All the 41mm models are by default strap-only, however, you can get one of the precious metal bracelets launched with the 39mm models on request (and I assume at a considerable premium). I don’t know that I’d want one of these watches on a metal bracelet. I’ve had a chance to spend a bit of time with the gold and black ceramic model and found it so convincing that I can’t imagine a gold bracelet doing very much to increase its appeal, but without actually seeing such a combination in the metal, I’m reluctant to make any definitive judgment. As I grow older, I increasingly feel that there is no such thing as too much yellow gold (which I suppose is to say that, as an aging watch enthusiast, I increasingly revert to type), so there is a non-zero probability that I would find such a combination instantly convincing after all.

The Constellation is not the mainstream enthusiast’s Omega, but I think the collection offers tremendous bang for the buck at all three price points. You couldn’t ask for more from a technical watchmaking standpoint, certainly, and fit and finish is also as good as you could hope. Omega’s use of ceramics has matured to the point that there is a seamless continuum in their watches between the appeal of ceramic for its technical properties and its aesthetics, and the Constellation watches give a very pleasant impression of careful attention to detail (the radial brushing on the dials, for instance, is actually centered around the star at 6:00, which I missed at first).

I suppose that part of the question with the Constellation is the extent to which you feel Carol Ditisheim’s original concept has aged well. As a child of the ’80s (more or less), for me, the design has a lot of nostalgic appeal, but you didn’t have to teeter on the brink of adulthood during that period in order to find a certain amount of period charm in the designs. If you want a pre-1980s take on the Constellation, there is of course the Globemaster, with a more traditional case, the same technical excellence, and the classic pie-pan dial from the era of the Constellation collection’s birth. Either way, you get interesting designs, superb movements with proven chronometric performance, and a chance to own something that represents real interest in terms of the evolution of watchmaking at Omega in the 20th – and 21st – centuries.