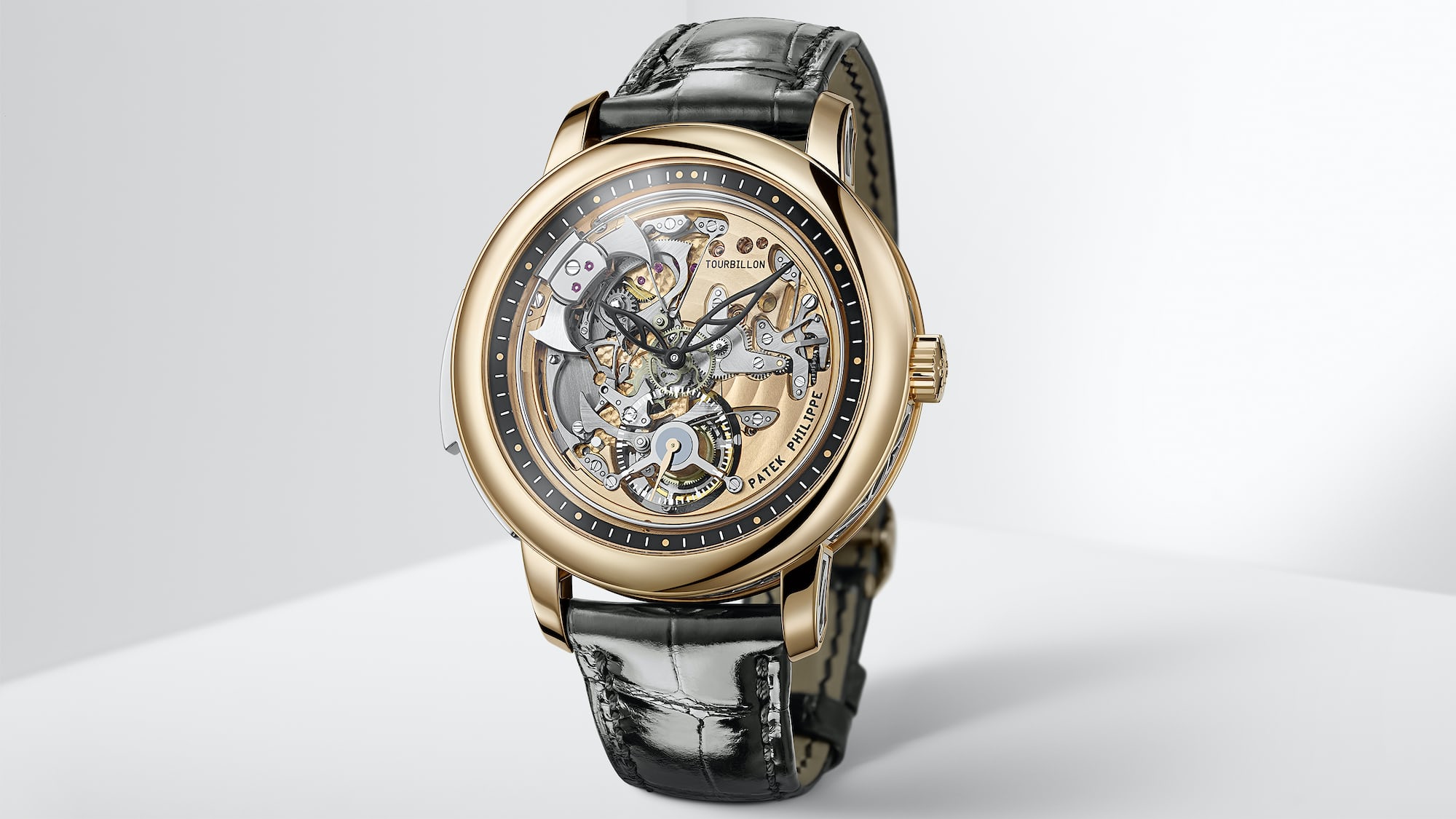 On September 4, 1839, a small watch shop on the Quai des Bergues in Geneva, which sits just across the Rhône from the Old City, and which had been open for just a few months, sold a pocket watch. The watch was a complicated one – a chiming complication, of the type known as a quarter repeater, and while the movement had been made in the Vallée de Joux (as was the case for most complicated Swiss watches at the time), it had been assembled, finished, timed, and cased in Geneva. The records of the shop, run by one Antoine Norbert de Patek, and his partner, François Czapek, say that the watch was only the 19th they had ever sold, and that the owner, who paid 450 Swiss francs for the watch, hailed from Bern.

You probably know the rest of the story – the company would become Patek Philippe in 1851, and it has been famous for its repeating timepieces ever since. Today, Patek Philippe has announced a new repeating watch – or rather, a new version of a repeating watch, I should say – which is the reference 5303R-001 Minute Repeater Tourbillon. The first version of this watch is the Minute Repeater Tourbillon Singapore 2019 Ref. 5303R-010 – that watch was launched in 2019 at the Patek Philippe Watch Art Grand Exhibition in Singapore last fall. It was a special edition of 12 pieces, intended for Singapore and Southeast Asia, and it had a bright red minute track with stars at the five-minute marks – an homage to the flag of Singapore. The new version is not a limited edition, although I expect production numbers to be extremely low (as is the case for all Patek chiming complications), and the new version sports a more somber black minute circle, but is otherwise identical, including the 42mm rose-gold case.

Usually, in a repeater, there are two gongs. To start the chimes, you draw back and release a slide set into the case band, and the watch will chime the hours on the lower-tuned going, then the number of quarter hours past the hour on both the higher and lower going (one “ding-dong” for each quarter), and then the minutes past the quarter on the higher going. It may seem odd that repeaters chime the quarters, rather than something more intuitive, such as the number of ten-minute intervals past the hour, but the minute repeater gradually evolved from the quarter repeater and so has retained the quarter repeater as its functional foundation. (There are, in fact, so-called decimal repeaters, which chime the hours, ten-minute intervals, and then minutes, but these are rare; the first to make one as far as I am aware was Kari Voutilainen and today, the Lange & Söhne Zeitwerk Decimal Minute Repeater is another example).

Generally speaking, minute repeaters are split mechanically into two levels; the first of these is under the dial, and the second, on the back of the movement (what watchmakers call the top plate, as that’s where, in general, most of the actual mechanism is located). The under-dial work, or cadrature, consists of the lion’s share of the repeating works. The motion works which drive the hands also, in a repeater, drive a system of stepped cams, which rotate along with the hands, though unseen. Drawing back the slide winds a separate spiral spring that powers the chiming system, and also allows a system of levers to fall onto the cams, and it is in this way that the repeater train senses the time. As the levers are lifted off the cams, racks to which they are attached pass the trips for the hammers which actually strike the gongs – hammer and gongs are on the opposite side of the movement, on the top plate side. The speed at which the gongs chime is controlled by a regulator; this can be either an anchor (which emits a buzz that is pleasantly old-school if antiquarian horology floats your boat, and a distraction if it doesn’t) or by a centrifugal regulator, which operates on the same principle as a flywheel and is the more modern solution (these are generally silent, or nearly so). The hammers, gongs, and regulator are the only parts of the striking mechanism on the top plate side of the movement and in repeaters with display backs are the only visible components.

In 2013, Patek Philippe held a special exhibition of every one of its then-current collection of repeaters in New York; HODINKEE recorded every watch doing its thing, under the watchful eye of Patek’s Laurent Junod.

Repeaters are highly complex even in their simplest form – in addition to the chiming train itself, there are safety mechanisms which must be built in to prevent incorrect chiming. These include the surprise piece, which prevents the levers from falling on the wrong step, as well as the all-or-nothing piece, which keeps the repeater from chiming unless the slide is drawn all the way back. These various elements all require exceedingly careful coordination to work properly. On top of that, the gongs, which are usually hardened steel, have to be fixed to their feet correctly and tuned properly; the depth of the hammer strike must be neither too deep nor too shallow; the tempo must be neither too rapid nor too slow; and on and on (the art of making cases for chiming watches is a whole discipline unto itself, as well). The acid test for a repeater is to set it to 11:59 and then activate the chimes – you should, of course, hear 11 hour strikes, three quarter strikes, and 14 minute strikes.

If you think about all that, you will understand why, of all the complications high and low, the repeater has resisted industrialization. We have industrial versions of split-seconds chronographs and of perpetual calendars, but the repeater remains one of the last bastions of high-craft watchmaking in which doing it the old-fashioned way is (with some caveats) still the only way of doing it.

Now if you look at the movement, and you are reasonably familiar with Patek’s chiming complications, you will see an old friend – the caliber R TO 27 PS, which is a tourbillon minute repeater that can be found in some of Patek’s most famous chiming complications, including the wonderful but rarely seen (and out of production) reference 3939, one of which, in a unique steel case, sold for $ 1,909,740 at Only Watch in 2011. The movement is as elevated a piece of Genevan watchmaking as anyone has ever produced, including Patek Philippe – the level of finishing, extremely tasteful and dignified movement architecture, and even drama, all combine to make the caliber one of the most important hand-wound complicated movements ever made for a wristwatch, with a beauty that goes beyond mere complexity and rises to nearly the level of art (if you ask me, anyway).

In terms of technical layout, this is a classic repeater – the regulator is under the Calatrava Cross on the left; the hammers are visible just to the right, and then there is the signature great wheel driving the tourbillon cage, and last the tourbillon itself; you can easily see the balance, with its Gyromax timing weights. As is customary in all high-grade repeaters, the chiming mechanism is “jeweled to the hammers” and the appearance overall makes an enormous impression, both at first glance and on repeated viewings. Another notable feature is the bat-wing upper bridge for the tourbillon – this is something of a signature for Patek Philippe, and can be found, among other places, on the observatory tourbillon worn by Patek’s honorary president, Philippe Stern.

The version of caliber R TO 27 PS in the 5303R has, as you can easily see, been significantly reconfigured. In particular, the hammers have been relocated to the dial side of the movement, which now sits under an open dial and allows the wearer, when the strike is activated, to observe the entire sequence of events involved in generating the chimes, without having to take off the watch. The gongs, of course, are on the dial side as well. The tourbillon remains in its customary place on the top-plate side of the watch, along with its conspicuous driving wheel and the centrifugal regulator, but the movement has been opened up to allow a view of the rotating underside of the cage and a seconds hand attached to the pivot of the cage (which rotates once per minute).

To say that quality is high is to say nothing at all. In terms of classic fine watchmaking, the movement is, in its most essential elements, almost reactionary; not only is there simply nothing to criticize, but there is also a feeling of leisurely disregard for any sort of practical constraints on time and cost of production. This is as it ought to be, of course, but it happens less often in luxury watchmaking than it should, and the visible excellence of every component shows that, at least at Patek Philippe as at a few other places, at the highest price point, there is still a lavishing of skill which has become increasingly rare in recent decades, at any price point.

Elsewhere in the market, tourbillon minute repeaters are as rare as you might expect. Vacheron Constantin has its Traditionelle Minute Repeater Tourbillon, and you can, if you wish, of course, have chiming complications – repeaters alone, or in combination with other complications – from Audemars Piguet as well, although I do not believe that at the moment the firm makes a watch with just a repeater and tourbillon (certainly they used to, in the Jules Audemars collection). And if you want a somewhat perverse take on the complication, there is Moser’s Swiss Alp Watch Concept Black, which actually has no hands at all and which makes the repeater not an accessory, but an essential if you want to tell the time (at least, the watch is a throwback to the earliest clocks which, it is often asserted, did not have hands at all but merely told the time by striking the hours).

One final but significant question remains, which has to do with the philosophy of design which this watch represents. Here, I have to confess that, when it comes to Patek tourbillon repeaters, I am firmly in the less-is-more camp. I used the word, “reactionary” before, and I personally struggle with this more extroverted incarnation of the caliber R 27 TO PS, which I have always felt reached its apotheosis in the 3939, a watch which I have long felt is, if not the definitive representation of watchmaking at the high end, certainly an example of classic, discrete, high-value-low-ostentation watchmaking. I cannot, however, find fault with the Ref. 5303R-001 in any context outside of my own retro-grouch inclinations (for that matter, I’m not entirely convinced I can find fault with it in that context either), and there is certainly precedent and then some for a more extroverted approach to movement layout and watch design overall at Patek. After all, it is not as if the Sky-Moon Tourbillon (for instance) is a shrinking violet, and if you do want a discreet chiming watch from Patek, they are still very much in evidence in the 5178 references.

The Ref. 5303R-001 is both very modern and wonderfully archaic – a repository of watchmaking techniques from a company which is an unlikely success in an industry which is an unlikely success. There could hardly be anything more unlikely than the survival and flourishing of the strange intersection of demanding hand-craftsmanship and highly complex mechanics that Swiss fine watchmaking represents, and yet here we are. It’s amazing to think that this watch is made by a company which, in recent years, is talked about mostly in the context of a certain stainless steel sports watch. The 5303R-001 is Patek’s other and much older side, and the movement has always represented one of the great intellectual and aesthetic pleasures in watchmaking. In this latest use of the caliber R TO 27 PS, the conceptual pleasure of the movement is now a much more visible one as well.