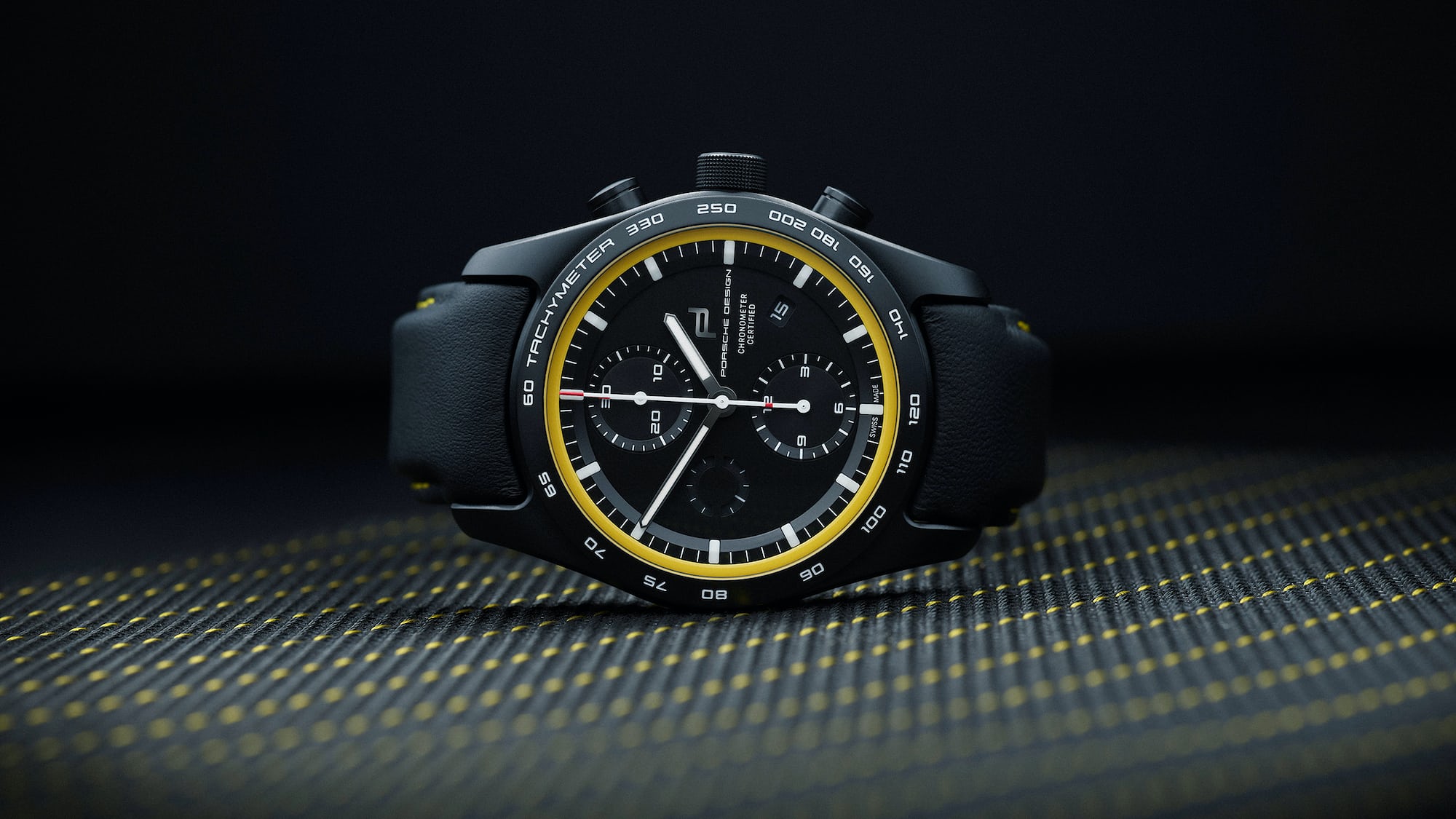 Porsche Design was originally founded by Ferdinand Alexander Porsche, who left Porsche to found the Porsche Design Studio in 1972. “Butzi,” as he was nicknamed, is most famous not for the watches he created after leaving the company, but for the design of the 911. His wristwatch designs have not left as deep and indelible a mark on horology as the 911 did on automotive design, but they are still a significant part of watch design history, and they remain, for the most part, as instantly recognizable as the inarguably more famous automobile. The very first Porsche Design watch was an all-black chronograph from the first year of Porsche Design’s existence, and today, the watch still looks very contemporary – significantly ahead of its time and a template for many other watches, from many other companies, which would follow.

Porsche Design (or, I should say more correctly, Studio F. A. Porsche), in a move designed to strengthen the ties between the auto manufacturer and the design studio – and also to provide a strong experiential link for 911 owners between the car and its wristwatches – has just launched a custom timepiece program with an online configurator which closely parallels the experience you get designing your own 911 with the online car configurator. Meaning you can get a watch which is not just connected by general design DNA to your 911, but one which matches it directly in many physical characteristics as well.

Interestingly enough, Porsche Design has for the first outing of the watch configurator restricted itself to a single chronograph model, but this decision is easier to understand when you look at the number of possible variations. You can order just about every part of the watch with a custom finish or in a custom color. The process begins by selecting a case finish – here, you have just two choices, which are glass bead-blasted titanium or PVD black, but once you have chosen one or the other, the configurator begins to generate tens, then thousands of different configurations.

The idea, says Porsche Design, was to create a watch configurator that mirrors as much as possible the experience of using the car configurator. Now, it goes without saying that the match is not an exact one – after all, a 911 has an enormously greater number of possible choices. They include (if you’ve never played around with the 911 configurator, which is a very enjoyable if potentially extremely expensive way to pass an afternoon – an extra twelve hundred bucks for some brushed aluminum in the cockpit? Sign me up!) everything from performance options to interior and exterior cosmetics, to rims, to such details as custom valve tubes, and on and on. Still, the watch configurator gives you an indisputably huge number of possible choices as well, and creating a watch to match your 911’s exterior and interior trim is possible pretty much no matter what you’ve decided to do with the car.

If you take all the possible configurations into account, there are, says the Studio, some 1.5 million possible versions (there are some 300 or so possible variations on the strap alone). One of the most customizable aspects of the watch is actually the view from the back. Here, you can choose from a range of different configurations for the winding rotor, which are based on the various rims available for the 911 and which offer probably the clearest direct link visually to the cars (all five of the currently available rims for the car have been adapted to rotors as well).

The basic case shape is that of the existing Chronotimer, and it’s one of the more traditional case shapes currently in Porsche Design’s timepiece lineup. It’s 42mm in diameter and water resistant to 5 bar/50 meters, and overall has a smooth-flowing, slightly biomorphic feel, which gives it a bit more of a sense of a direct link in design language to the 911 than you get from some of the more angular models Porsche Design makes. In pretty much every respect, it’s a case and design which is in line with F. A. Porsche’s vision of purpose-driven design. The various elements err very much on the side of spareness and clarity – this is technically a three-register chronograph, but it feels very much like a two-register design, thanks to the suppression of the sub-seconds dial at 9:00 (which is legible enough to allow the watch to be set to seconds-level accuracy, but only just).

The movement, speaking of accuracy, is Porsche Design’s WERK 01.100; this is a COSC-certified flyback automatic chronograph, with a 48-hour power reserve. The basic movement architecture has an obvious similarity to the ETA 7750, but there are some significant differences as well (including the addition of the flyback function).

The implementation of the watch configurator meant adopting a supply chain which is unusual for the watch industry, in which the norm is to order some components from suppliers, manufacture others oneself (the extent to which a manufacturer does one or the other varies enormously from brand to brand, obviously), and then assemble the watches under one roof, in a more or less homogenous production run. In the case of these new custom timepieces, however, Porsche Design has established an arrangement with its suppliers which allows it to source various components on an as-needed basis for individual watches, each one of which is to a greater or lesser extent unique, depending on the choices made by the prospective watch owner. Once you’re done designing your watch, your design receives a unique identifying number. This number can be accepted by any Porsche dealer, and the orders for the various components go out from Porsche Design to its suppliers; the whole process takes eight to twelve weeks, and if you want, you can pick up your new watch at the same time you pick up your new 911.

Because the whole concept behind the watch configurator is to reproduce the aesthetics of the car as closely as possible in the watch, Porsche Design has gone to rather elaborate lengths to ensure things like paint, leather, and stitching correspond closely to their automotive counterparts. The yarn used for stitching the leather straps is the same used in the car upholstery. Color matching between car and watch was apparently a non-trivial challenge, as the technical requirements are different in each case, and the colors appear differently depending on the material to which they are applied. Simply using the same paints on the watch that are used on the car would not have produced satisfactory results, and so new paint formulations had to be devised. You can, if you wish, order up to three additional straps, and straps and bracelets can be quickly and easily swapped out, thanks to a pushbutton-actuated quick-change strap system.

Prices start at $ 6,000 and go up to $ 12,500 depending on options chosen and configuration. Right now, the online watch configurator is German-language only, as the program has not yet been rolled out worldwide, but you can expect to see it debut in the USA this September – the ultimate 911 accessory for what is still, for many, the world’s most desirable sports car.

Find out more at Porsche-Design.com.