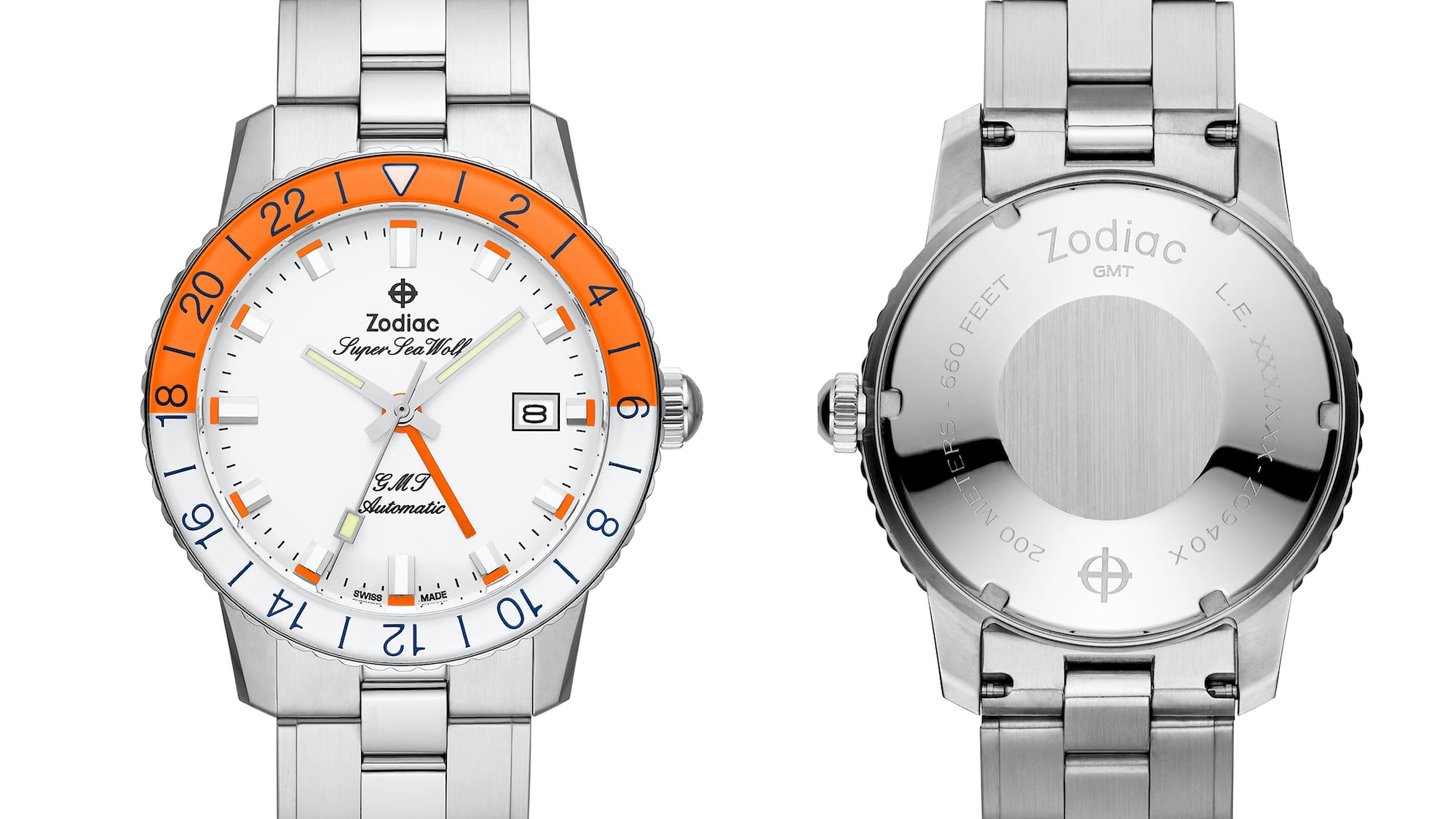 Who said major watch brands never listen to their enthusiast audience? Zodiac certainly has, and today, the proof is presented in the metal. Meet the newest colorway of the Super Sea Wolf GMT family: sherbet orange and cream. Last summer, Zodiac let fans on Instagram decide which watch would come to fruition from among a number of mock-ups. You’re looking at the result.

At Baselworld 2019, Zodiac unveiled a brand new Aerospace GMT model. It spoke to collectors for its fun colorways and friendly price tag, but like many watches that strike a chord with the collecting community, it sold out shortly after it was released. Only 182 examples of each of the two versions were produced. The watch came with a funky blue and orange GMT bezel or a more conservative greyish-green and black GMT bezel. Inside was the old GMT workhorse, the ETA 2893-2.

This summer’s sherbet orange and cream edition follows the same format, but this time, Zodiac has made 282 examples available instead of 182. The rapidly extinguished supply of the initial release has demonstrated that the demand is there, so why not make more enthusiasts happy by making more watches? After all, they left it up to fans of the brand to decide which watch to produce. It’s these kinds of logical and democratic-minded decisions that make modern Zodiac incredibly compelling.

The new Super Sea Wolf GMT uses the same ETA 2893-2, the same 40mm case that wears smaller than it measures, and the same bracelet with polished center links. It’s simply a new colorway, but there is a charming historical tie-in.

In the ’50s and ’60s, Zodiac produced watches for the many, touting reliability, affordability, and durability. The advent of SCUBA and skin diving gave rise to a new market for dive watches that were accessible and attractive. The “dive watch” archetype was in its infancy back when Zodiac was king, and while iconic watches like the Submariner rose in tandem with watches like the Super Sea Wolf and Aerospace GMT, they have always existed in different tiers of the market. Zodiac used pulp adventure comics in its advertisements and has always been light, fun, and designed for folks who want a piece of equipment that doesn’t break the bank. The Sea Wolf was even favored by GIs in Vietnam when their issued watches failed. They were popular at PX shops.

The creation story of the Zodiac Aerospace GMT starts, and ends, with the Sea Wolf. In the ’60s, off the back of the success of the Sea Wolf, Zodiac responded to the burgeoning jet age by taking the case design and visual language from the Sea Wolf, dropping in a GMT-capable movement, and adding a bi-color GMT bezel. This was the birth of the Aerospace GMT.

In 2019, the Aerospace GMT re-emerged as a limited edition, but Zodiac has since switched to the naming convention of the “Super Sea Wolf GMT Automatic,” linking to the model’s heritage. It’s slightly confusing, but the takeaway is that this Super Sea Wolf GMT is a direct descendant of the Aerospace GMT of the ’60s. It’s aviation-focused and meant to cross time zones.

As far as heritage is concerned, there’s another reference to the Zodiac models of yore. Years ago, I came across a Zodiac Sea Wolf model at a vintage shop in Japan that was hard to ignore. It wore a highlighter-orange chapter ring and scale on the bezel. Visually, it was loud, but not obnoxiously so – it was balanced enough that I decided to snag it.  Bright orange is hard to resist. We’re hardwired to pay attention to a color like that.

This new colorway, chosen by Zodiac fans, seems close in spirit to the orange-and-silver aesthetic that can be found on certain Zodiacs from the ’60s, like the Sea Wolf I bought in Japan. The modern rendition is a slightly muted orange, and there’s a hint of blue in the form of the GMT scale on the bezel. The dial is a flat white, and the markers almost have the effect of being mirror polished. They pop against the dial, making it legible and just slightly flashy. The Super Sea Wolf GMT plays with textures in an interesting way, like the sheen of the mineral glass-covered bezel against a flat white dial, and the way the polished indices match the polished center links and bevels in the case.

After the success of previous iterations of this watch, Zodiac is back to give us what we want, and little has changed. Well, the color has, but hey, you asked for it!