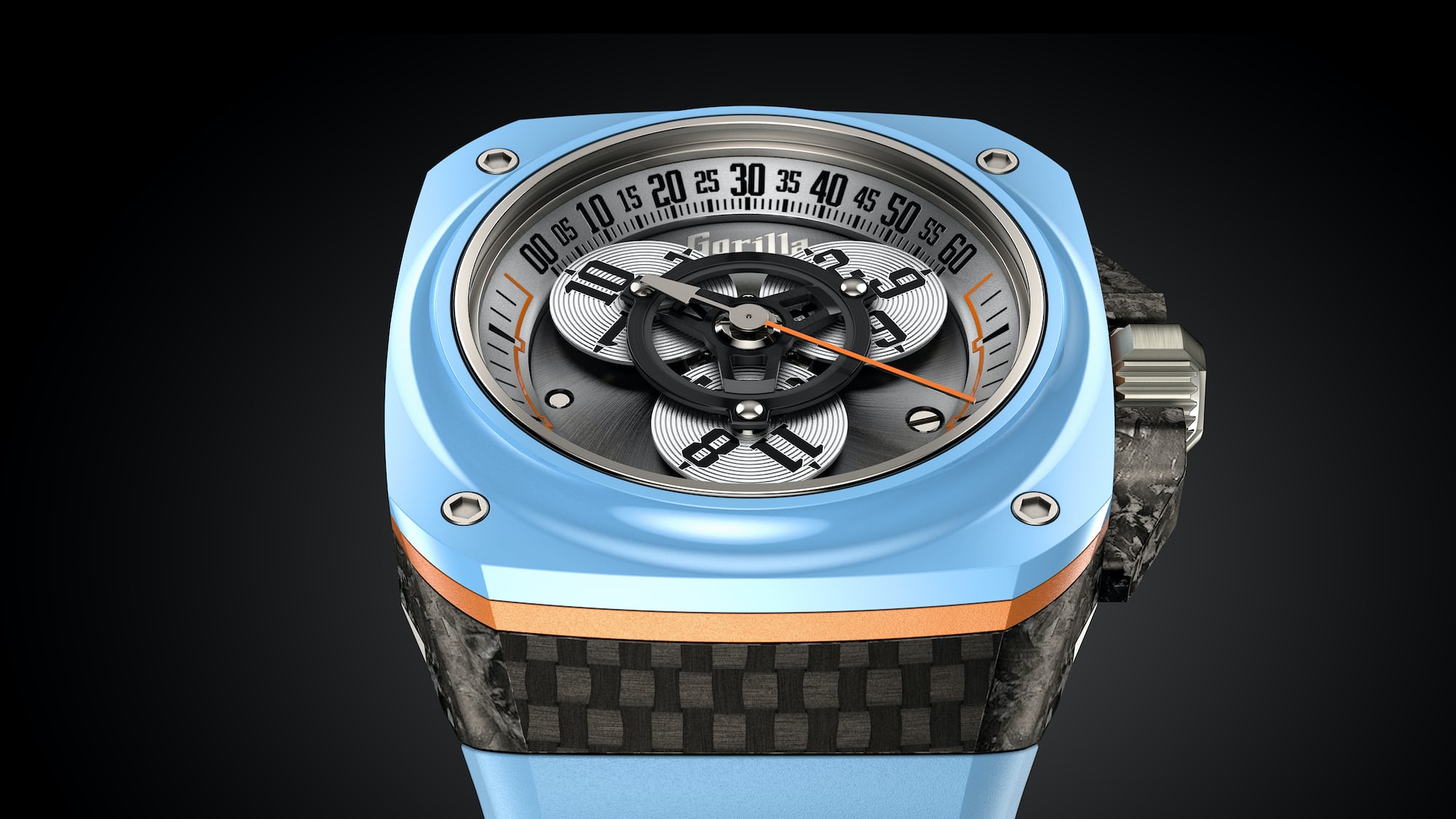 Gorilla was founded in 2016 by Octavio Garcia, who was, before starting the company, creative director at Audemars Piguet from 2003 to 2015. Garcia, despite having spent much of his career in Switzerland (he studied product design in Switzerland and his first gig in the watch industry was with Omega in 1999), is actually American and was born and raised in Chicago, where he grew up absorbed in the fictional comic book universes of Marvel and DC and helping his father tweak muscle cars. While Garcia’s work at AP often stretched into six-figure territory, Gorilla was founded with another intention, which was to produce visually distinctive and texturally rich timepieces, using materials generally associated with higher prices, on more affordably priced watches. Along with his partner Lukas Gopp, an industrial designer with work at IWC, Ralph Lauren Watches & Jewelry Co., and Audemars Piguet to his credit, Garcia began producing watches often priced right around the €1,000 mark but with ceramic bezels, forged carbon cases with anodized aluminum accents, and multi-layered dials, all powered by reliable Miyota movements. The company has stayed true to this vision of high-impact, low-cost watchmaking since its inception, and one of the most interesting steps the partners have taken is to introduce the wandering hours complication to its collections.

The first wandering hours complication from Gorilla debuted in 2018 and a more recent introduction is the Fastback Drift Wandering Hours, which draws on the same design language as the 2018 Fastback GT Mirage, whose blue and orange color scheme is a shout-out to the Le Mans-winning Ford GT 40.

The complication on the other hand is a very old one – the earliest such clock was made in 1656 by the Campanus brothers, in Italy, for Pope Alexander XII. (There is a very early anonymous wandering hours clock, made around 1680, at the offices of Urwerk in Geneva.) The name comes from the fact that the time is read off three rotating hour disks, mounted on a carrier. The disks each carry four numerals, which indicate the hour, and they pass in turn across a sector at the top of the dial, thereby showing the minutes. The complication is interesting and unusual enough to form the foundation of an entire brand (in the case of Urwerk), and it has in the past been used by Audemars Piguet as well, in its Star Wheel watches (first produced in 1991, but now, sadly, long out of production).

The movement base is the ETA 2824, which provides enough torque to propel the wandering hours module and still provide its usual 38-hour power reserve. The wandering hours module, G-5238, is interestingly enough produced for Gorilla by Manufacture Vaucher, which is also known for its production of movements and complications for watches which are often considerably more costly than anything made by Gorilla; this includes Hermès, Richard Mille, and, of course, Parmigiani Fleurier, which like Vaucher is part of the Sandoz Family Foundation. Despite the company it keeps, the Gorilla Fastback Drift Mirage Wandering Hours is very reasonably priced (to put it mildly) at $ 3,750.

I was pretty taken aback at the value which Gorilla watches represent when the brand first launched, and I had the same reaction when the company launched its wandering hours complication. It seems incredible that they can produce a ceramic and forged carbon-cased, sapphire crystal, complicated watch in partnership with Vaucher for such an approachable price, but they have. The wandering hours complication is extremely versatile – at Urwerk, it has a very cyberpunk, postmodern feel, while at Audemars Piguet, it has been generally given a very traditional and even aristocratic feel. (For another example of such a take on the complication, it has also been used at Arnold & Son in a very beautiful but quite expensive watch; the Arnold & Son Wandering Hours timepiece is $ 47,500.)

While the launch of a wandering hours complication represents a new high-water mark for pricing at Gorilla, it is still dramatically less expensive than is normal for the complication. Of course, a great price-value ratio is not a good reason to buy a watch, at least not in isolation, but in terms of design and complexity alone the Fastback Drift Mirage Wandering Hours represents great value as well, if you ask me. It’s a very striking watch and represents a really original approach to the complication, and in the metal/ceramic/forged carbon, it gives the impression of being extremely well made and thoughtfully designed as well. Despite its size (44mm, but c’mon, you weren’t really expecting a sub-40mm watch from a company called Gorilla, were you?), it’s a very comfortable watch to wear, thanks to the integrated strap and overall lightweight construction. And if you want a great wrist conversation piece, it’s a great watch day or night (there’s black Super-LumiNova on the satellites and minutes sector). For under four thousand bucks, I have a hard time thinking of a more distinctive, to say nothing of flat-out fun, wristwatch, and with a very cool interpretation of a nearly four centuries-old complication to boot.