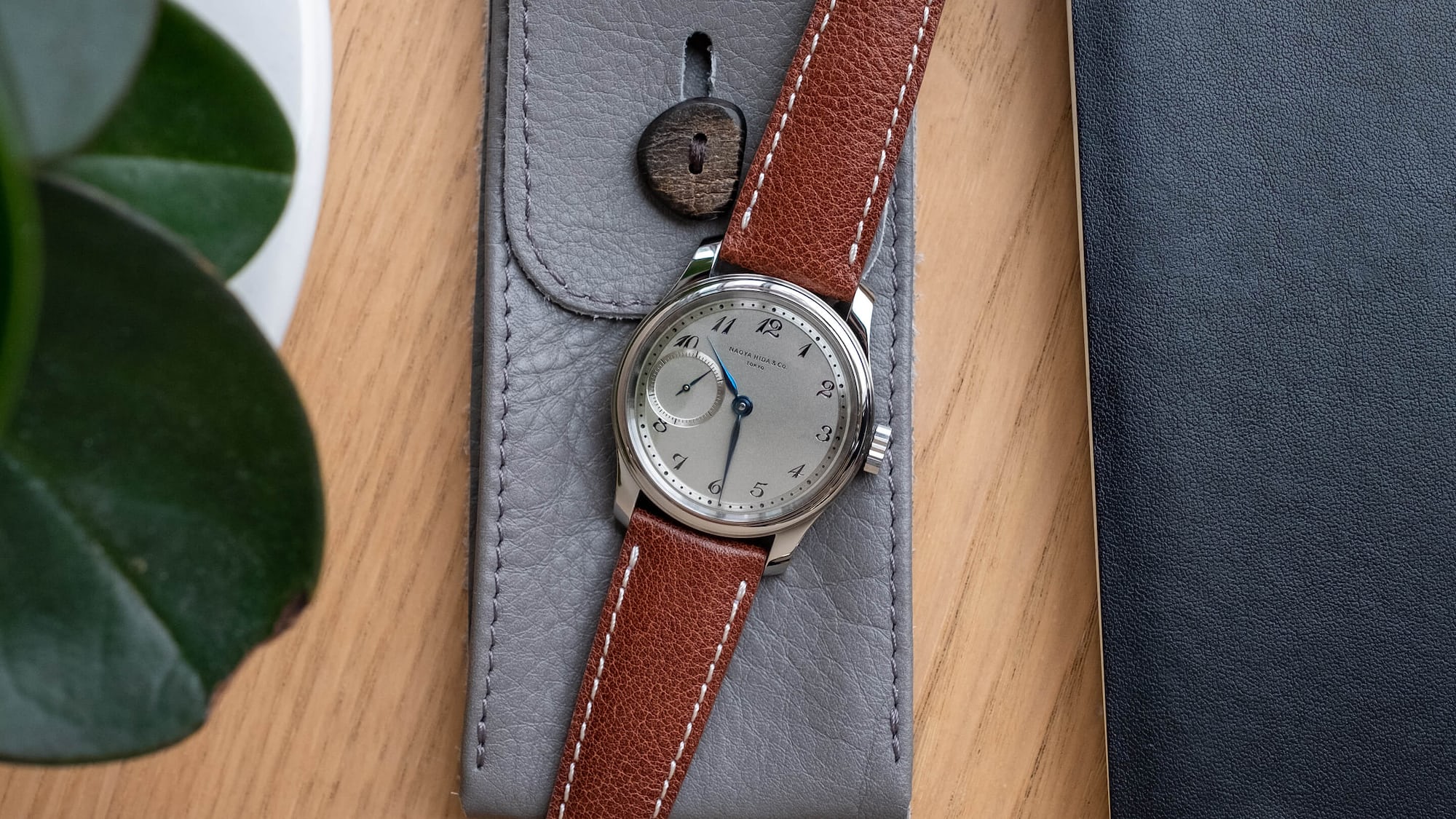 We reported about the NH Type 2A, a 2020 novelty from Naoya Hida & Co., just a while ago. The Type 1B is the brand’s debut piece that came out last year, and I saw this watch in the flesh for the first time about a year ago during its press release. I only had ten minutes or so with the watch then, and that just wasn’t enough to observe all the details. By the way, the NH Type 1B already has its predecessor: NH Type 1C.

Naoya Hida & Co. is a new Japanese watch company launched in 2018 by Naoya Hida, a well-known figure in the Japanese watchmaking community. Hida has held prominent roles in sales and marketing at Japanese distributors for several top brands (Jaeger-LeCoultre, Vacheron Constantin, Breguet, F.P. Journe) since 1990. Hida founded his own watch brand in Japan with the mission to create his ideal wristwatches.

The NH Type 1B’s stainless steel case has a slim and vintage-inspired proportion of 37mm across and 9.8mm thick with a 20mm lug width. The watch resembles the classical look of vintage pieces from the 1930s to the 50s. Hida opted to use 904L steel instead of the more typical 316L for the case, as the former is highly corrosion resistant and often used in tech, aerospace, and chemical industries. Rolex was the first watch manufacturer to utilize it. The 904L is more expensive than the 316L, and tooling is much harder as well. Hida was met with many rejections when he reached out to manufacturing vendors, but he eventually found a company (which usually makes automotive and computer parts) that can machine this challenging material with an accuracy down to just a few microns using its own ultra-precision micromachining equipment.

A clean round case in 904L steel sits on sharp lugs with pronounced edges, creating a high visual contrast. The front face of the watch may suggest the entire piece is polished, but you will find the sides of the middle case are indeed brushed. The vintage-inspired oversize crown is kept polished and unsigned for a more discreet look. You will appreciate the tactile feel of the 18 teeth on the crown when you wind it.

The German Silver dial features interesting Breguet-style numerals, and the blued handset and the small seconds at nine o’clock further enhance the unique look. Typically, indices are either applied or printed, but the NH Type 1B took a little different approach. The numerals are all hand-engraved by skilled artisans and filled with a synthetic cashew urushi. You’ll find this kind of execution on some antique pocket watches, but it is virtually nonexistent today due to its prohibitive manufacturing cost. Each watch is individually unique with a slight variation in engraving thickness and depth as the entire process is done by hand.

Another stand-out aspect on the dial is the three leaf hands. They, too, are machined out of metal like the case to achieve a three-dimensional look, and they get heat-blued after hand polishing. The hands are long and contrasty against the silver dial, providing excellent legibility.

The cal. 3019SS hand-winding movement drives the watch. This movement is based on the Valjoux 7750, but it’s been converted to a manual-winder with the automatic winding components and chronograph module removed. Now, why would you go through all that trouble? There were mainly two reasons for that decision:

1) To house a large movement that JUST fits in a 37mm case.

Hida says that he took the Patek Philippe Calatrava ref. 96 as a reference point for the design. The ref. 96 measures 30.5mm across its case and houses a 27mm movement. That’s about as large as a movement can be for the given case size, and that would result in the small seconds dial not being too close to the center of the dial. After considering several existing hand-winding movements, Hida ultimately chose the Valjoux 7750, which is 30mm across (13.25 ligne) against the 37mm case, as a starting point and opted to remove the unwanted components from it. On top of that, the click and its spring were newly designed to achieve Hida’s ideal tactile feedback on the winding action. You’ll feel a slight resistance when you start winding, and your fingers will pick up a light and crisp feedback as you keep going. This kind of attention to detail is much appreciated, especially on a manual piece that requires a routine hand-winding.

NH Type 1B retails for 1,800,000 JPY (approximately $ 16,765), and the price tag isn’t something you see every day on a stainless steel three-hand watch with an ETA-based movement. To be honest, I don’t think anyone would find this watch to be a value proposition. You don’t have to add much to your budget to reach Patek Philippe, Audemars Piguet, and Vacheron Constantin territory. However, we are talking about a micro brand here. Major brands can get more aggressive pricing through larger-scale material purchases and other cost reduction measures in production. Hida’s use of cutting-edge technologies and unique methods to achieve his ideal vintage-inspired aesthetics is definitely noteworthy. When you realize the initial production was limited to just seven pieces, I think you’ll understand that his approach to watchmaking, which could well be borderline madness, is something of a force to be reckoned with.

NH Type 1B had a limited production of seven pieces, and all of them are already spoken for. You can still purchase its successor, NH Type 1C, which was introduced this year. Visit the official website for more details.