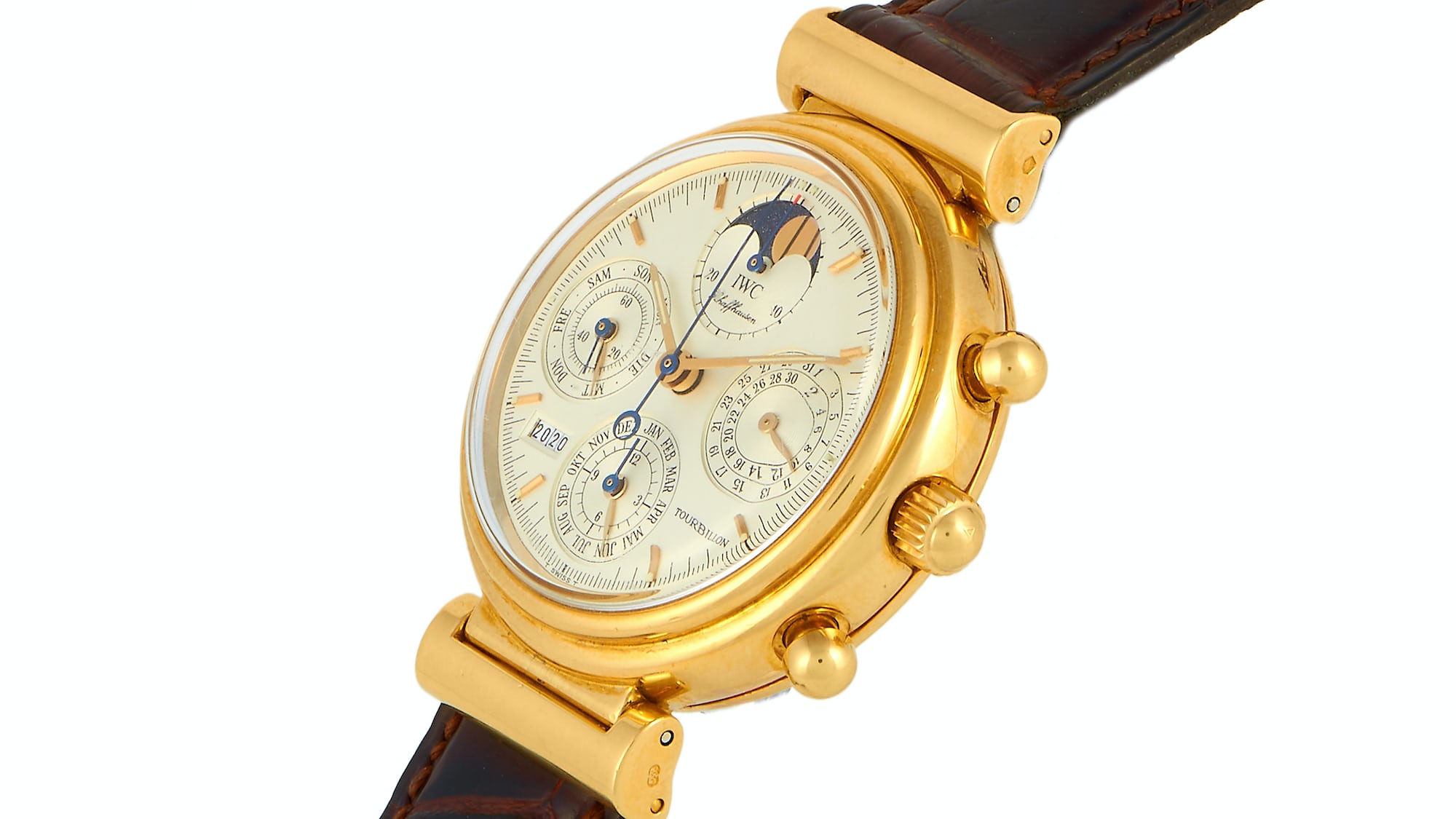 It’s Friday once again, which means it’s time to get down and dirty with a host of interesting finds on the market this week. With the inclusion of a perpetual calendar chronograph from IWC and an Omega Chronostop, you’re bound to get your fix, but unlike other weeks, we’re putting the spotlight on some horological treasures that aren’t intended for the wrist. Is it more difficult to justify the purchase of a Heuer running timer, or a Jaeger-LeCoultre globe, or even a Rolex wall clock? Maybe, but there’s no denying their appeal, and the want this week is strong.

If you genuinely consider the relationships you’ve developed with certain brands, and the potential reasoning behind them, you’re bound to learn not only what you look for in a watch, but also who you are as a collector. In my eyes, those who focus their efforts on IWC have always stood out as interesting characters, and if you didn’t already consider yourself one, this first piece might just push you over the edge. With a hefty helping of horological significance, and a design aging not unlike a fine wine, there’s a lot to love here.

As the added line of text near the four o’clock position would indicate, this is no “ordinary” Da Vinci Perpetual Calendar Chronograph. That’s right: This little number has a tourbillon at its heart, but it is still wound and set using one single crown in accordance with the original and masterful Kurt Klaus design. Only 200 examples of this grand complication were ever produced, and in comparison to other similarly equipped pieces of the same era, the IWC trades for significantly less, making it quite the bargain of haute horology. It’s also incredibly wearable at 39mm across, much like other IWCs of the same vintage.

Just to be very clear, I’m aware of just how much $ 26,000 is and the immense privilege that goes along with being able to throw that sort of cash around at will, but this is most definitely a “deal” for the experienced watch collector. Are we talking about a contemporarily styled piece that’s on everyone’s hit list? No, though we’re definitely not talking about a fad-derived novelty that’s lost its luster, and instead, a classically styled work of ultra-complicated art. As you likely already know, the same money won’t put a host of hot, time-only pieces on your wrist lately — let alone the complicated fare — hence my interest in this one. The only thing you’d have to consider would be servicing costs down the road, but that’s a bridge you’ll have to cross with any hilariously functional timepiece.

Luxury Bazaar is offering this outstanding IWC on their site. As mentioned, it’s been priced at $ 25,995.

Every once in a while, an attractive Omega Chronostop will make itself known, and I simply can’t help but point friends in its direction. Despite the fact that this watch played a noteworthy role in introducing me to vintage watches, it is an objectively good reference and a great go-to for anyone looking to dip their toes into this realm of collecting. While browsing through the very forum where you’d expect to find such a watch listed, I came across this example of the sixty-second timer. After reviewing the photos, you’ll surely see why this just couldn’t be left out.

Omega rolled out the Chronostop in 1966 and earned much praise for its efforts in little time. In 1967, the design won the Swiss Watchmaking Federation’s Honor Prize for chronographs and sport watches. In 1968, it took home the Industrial Aesthetics prize at the Utrecht Spring Fair, and it was then selected as the official Omega timer of the Olympics in Mexico. All this to say, the stripped-down, minimal chronograph was a hit, and it continues to be one thanks to its relative accessibility, high-grade Cal. 865 movement, and range of colorful variants.

This particular example of the reference left the factory with a subdued, black dial, though its normalcy is made up for by the remarkable condition in which it’s being offered. Whenever I come across a great Chronostop, I deem it’s the best I’ve seen, but the universe seems to have a habit of continually showing me better examples. I might’ve said it last time, but I can now confidently say that this is certainly the best I’ve seen, with a perfect dial, near-perfect case, and the original bracelet still attached.

A seller on the Omega Forum is offering this piece from their collection. It’s been priced to sell at €1,300, and I think you’ll be hard-pressed to find a more interesting watch in this bracket.

Having discussed two watches so far, I thought we’d spice things up this week through a look at some horological objects of desire that won’t end up on your wrist. The first of which is a sporting timer from Heuer, but one which you might not already be familiar with. In objective terms, it’s something that no one needs and will serve no real purpose in your daily life, but it’s incredibly cool and guaranteed to pique the interest of Heuer-focused horophiles.

The Runner always struck me as one of the more fascinating timing devices produced by Heuer, as unlike the rest, it’s a fob watch of sorts. Attached to the case is a plastic clip, allowing for the Runner to be attached to one’s shirt prior to jogging or sprinting a set distance. Additionally, it’s distinguished by the presence of a toggle switch on the side of its case, allowing the user to set the distance they intend to run. All of this adds up to a device that’s especially useful for the specific application of timing running, speaking to Heuer’s commitment to the precision timing of sports in years past.

This one looks to have never seen the light of day since having left the factory, and while I’m sure the next owner is sure to appreciate this, it’s not exactly uncommon. After doing a quick scrape of eBay, it’s easy to see that there are quite a few near new old stock timing instruments from Heuer up for grabs, suggesting less than ideal sales of these countless devices over the years. Nevertheless, its black, red, and white dial is a sight to see, and its unique functionality ought to bring someone joy. Given the infrequency with which these surface, you might want to give this one a closer look.

An eBay seller in Oklahoma City has this Heuer listed in an auction that’ll come to a close on Saturday evening. At the time of publishing, the high bid stands at $ 200.

It’s always exciting to chance upon a familiar face with a twist, suggesting that there is indeed more out there that’s yet to be discovered. However, if you’re not careful — and your finances will so fortunately allow it — you’ll develop an insatiable taste for the rare and unusual after the acquisition of a few such pieces. Collectors who focus and invest heavily in double-signed timepieces are a great example, as they’re exclusively after what many deem to be “next-level” examples of already tremendously important watches, and they will settle for no less. I’ve witnessed it first-hand, but I would argue that there’s a more compelling way to go about that approach than paying up for a host of modern Pateks. With that in mind, let me show you what I’m talking about.

In case you couldn’t already tell, you’re looking at a Rolex wall clock. These are usually seen with the Pan Am logo gracing their dial, but this example proudly displays the name of the once-authorized dealer Busch & Sons Jewelers. Given the shape of the letters and tone of the fill color, this Texan retailer’s logo looks to have been hand-painted on the dial, differentiating it from the already top-tier collectible that is the Pan Am variant. We’re essentially talking about an obscure version of an already obscure product in hand-executed form, which doesn’t sound like the sort of thing to be going unnoticed, if you ask me.

The example in question and up for grabs would appear to be extremely clean, with a seemingly flawless dial. To be fair, I haven’t seen a great deal of these clocks with dinged up, dirty dials, but I’ve gotta give credit where credit is due, and a well-preserved clock is exactly what it sounds like. Like other examples I’ve come across, this one was produced in Ohio, though not by Hanover. Instead, you’ll find the name of the Ohio Advertising Display Co. on its rear, which I’d wager is associated with Hanover in some way. I’ll be looking into this one a bit more, so be sure to check out the comments for any further findings.

You’ll find this wall clock included in the latest online sale at Christie’s. They’ve set the estimate at $ 6,000 – $ 9,000. At the time of publishing, the high bid stands at $ 6,000. Hit the link for more info and to explore the rest of the catalog.

Should you have enjoyed the aforementioned wall chronometer, you’re bound to like how we’re wrapping things up for the week. My introduction to our last feature came a number of years back, by way of a dealer set-up at a watch and jewelry show in South Florida. Upon first glance at the orb-like device, I immediately needed to know more and found myself grilling an admittedly uninformed salesman. The natural progression was to research until the cows came home, revealing a complicated desk accessory for the person that’s likely got it all.

Though it’s essentially a glowing globe – and there are no two ways about that – Jaeger-LeCoultre’s Mappemonde has also got a few tricks up its sleeve which can be best seen on its base. Apart from its geographical functionality, this is also a working clock, indicating hours, minutes, and a second world-time display. Its world-time function might only yield approximate results after you’ve adjusted the globe to your desired location, but it’s the only globe touting a world-time complication that I know of, and that’s gotta count for something.

Being a Jaeger-LeCoultre of the 1930s, the Mappemonde is beautifully manufactured, with expertly crafted, Parisian paper gores overlaying the illuminated glass globe. This one has its original Bakelite and chrome base still intact, and it looks to still have quite legible numerals on its rotating discs, but I’d honestly still be interested even if it were in lesser shape. As you might’ve seen coming, these horological ornaments rarely ever surface, and for that reason, any offering is an occasion to take note of. I’d suggest getting some more photos but pursuing this one actively if it speaks to you.

Christophe Auctions of London, England will be selling this Jaeger-LeCoultre in a sale taking place on August 4. Its estimate has been set at £2,000 – £3,000, but based on the past sale prices of Mappemondes, it’ll likely go higher. Get the full scoop here.