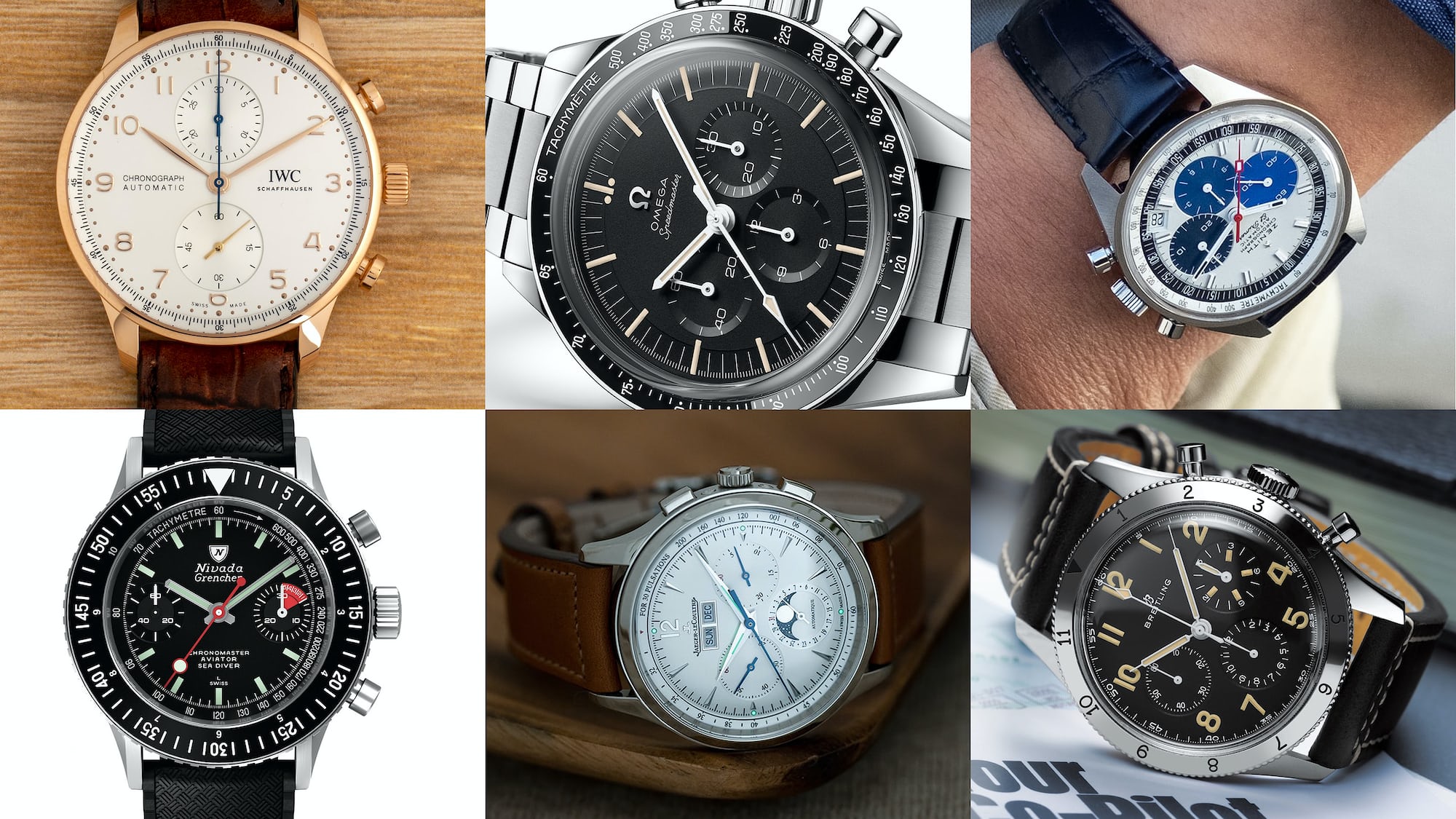 Who doesn’t love a chronograph? HODINKEE editor-in-chief Jack Forster has written that chronographs seem to have the ability to bring out the worst in watch designers, but they can bring out the best as well, and as a complication, they are not, unlike things like perpetual calendars and minute repeaters, restricted to the high-end of the price spectrum. They can, instead, be found in everything from reasonably priced, tough-as-nails tool watches to ultra-high-end examples of the watchmaker’s art at its most refined (and most expensive) and pretty much everywhere in between. Since they first began to be produced in pocket watches in the mid-19th century, chronographs have been made to time just about everything imaginable, and under almost any circumstance imaginable, and modern chronograph production continues to re-invent and re-imagine this apparently inexhaustible source of horological inspiration.

As arguably the world’s most widely produced complication (after, of course, the simple calendar) the chronograph has this year continued to be a staple of new watch launches, and HODINKEE’s editorial team has chosen their personal favorites of this year’s releases so far. It’s worth remembering, however, that the year is only just half over, and there are undoubtedly many more new releases to come, as the watch industry adjusts to the new (ab) normal.

From the moment I saw the new Master Control Chronograph Calendar, I had strong feelings. This was a watch that I would certainly enjoy owning, I thought, and one that I wish I’d at least get a chance to see in the metal. Jack’s Hands-On article only served to convince me further of my own early belief that this watch deserved a place right up there with the best watches of 2020. Every once in a while, a watch comes along that seems to get just about everything right: design, dimensions, functionality, value for money. Perhaps it’s the fact that it feels like a watch JLC could have made in the middle part of the last century, yet somehow didn’t, that enhances its appeal. The whole revamped Master Control line feels like good and honest watchmaking, plain and simple, and the Chronograph Calendar is the line’s best expression.

I feel like I make this bid for pity every time we do an editors’ round-up, but I found it very difficult to pick a favorite out of this year’s lineup of chronographs. We have had a lot of very cool stuff come out so far – the watches chosen by my fellow H. editors all represent extremely interesting, attractive efforts and, moreover, with a huge range of value propositions depending on your taste and budget. From the cheap and exceedingly cheerful Nivada Grenchen Chronomaster Aviator Sea Diver, to the Moser Streamliner Flyback, and all the way up to (at the higher end) Vacheron’s Traditionelle Tourbillon Chronograph and Patek Philippe’s Ref. 5370P-011 Split-Seconds Chronograph, there really was something for (almost) everyone, on the assumption that you were interested in a new chronograph this year at all.

For personal favorites, though, I suppose I have to go with the Omega Speedmaster 321 “Ed White.” The Speedmaster was an early love of mine, and while my own 1861-based Speedy will always have a special place in my heart as the first so-called good Swiss watch I ever owned, there was always a part of me that wanted a new Moonwatch, but with a re-introduced caliber 321 which was, after all, the movement that went to the Moon. I never really thought it was going to happen. The 1861-based Speedmasters have served in manned space flight quite honorably as well, but the idea of a fresh-out-of-the-box, brand-spanking-new, wear-without-worry modern Speedy with a good-to-go caliber 321 never lost its appeal, and this year, against all odds and to my everlasting surprise and pleasure, it came out. It’s not completely a reboot of the original Ed White, of course – I would have preferred plain white lume and the option of a closed caseback, I suppose, but in neither case do I find those aspects of the design a deal-breaker. The new Ed White is as close as I’ve ever come in watchmaking to having a horological genie make a few passes in the air and making an impossible wish come true.

Don’t get me wrong, I really like this chronograph, but it’s the details behind it which really piqued my interest. You have all the makings of a great story here. Never before used, ostensibly prototype, A386 dials were found in a dusty box in the attic of the Zenith Manufacture. These dials were then used to realize the final vision of a design not previously commercially released. It doesn’t get much better than that, especially when dealing with a design as – and pardon my use of the phrase – iconic as the El Primero. The difference between this Revival piece and the classic Zenith A386 comes down to the colors of the subdials – and that’s what makes this one so cool. Three different, overlapping shades of blue probably should not work aesthetically, but here, it’s a winning trio. This design, inside of the A386 Revival case with a Zenith El Primero Caliber 400 movement is something I would really like to wear.

There’s so much to dig into with Nivada Grenchen, and I’m excited someone is finally doing it. I haven’t seen the Nivada Grenchen Chronomaster Aviator Sea Diver in person yet, but it looks like it’s executed superbly, and that price isn’t egregious, either. Jack nails it in his assessment in the original write-up, saying, “there is no nonsense here about ‘updating a classic design for modern tastes,’ which all too often means, ‘getting rid of just enough of what makes the watch attractive to enthusiasts to put them off, but keeping just enough about it to keep it from being a satisfying modern watch, and therefore pleasing no one in trying to be everything to everyone.'”

That’s what I like most about this modern re-edition, but it also passes a test that I use to look at rebooted watches: Would someone who doesn’t particularly appreciate the history of the watch be into it? Can the watch stand on its own? I think this one can. Enjoy the watch for the way it looks, feels, and operates, and the incredible history is just a bonus.

It’s hard to think of a watch that better fits the definition of the phrase “modern classic” than the IWC Portugieser Chronograph. It’s one of the first “nice watches” I ever encountered, when I was an intern at a quarterly arts and culture magazine in London during summer breaks from college in the much more humble midwest. Someone in the office had one, and I remember ogling it not infrequently. That white dial with the crisp blue hands and numerals looked like what the man I aspired to be would have on his wrist. Now, more than a decade later, the watch looks almost identical and is every bit as beautiful as it was back then – only now IWC has updated it with a killer in-house caliber. They did this kind of under the radar, which makes me respect the move all the more. The result is a watch that you’d be hard-pressed not to enjoy as a daily wearer in nearly any setting. Now if only my college-aged self had known what an in-house movement was…

I liked the Breitling AVI Re-Edition back when it first launched, and I still like it now. I’m really not at all a chronograph guy, but this faithful re-issue is the right size, packs a solid movement, and looks sooooo pretty. Also, it’s got a 12-hour bezel, which never hurts. With proper sizing and a textured matte black dial and tanned lume application, this is yet another vintage-inspired model from Breitling that shows the strength of its leadership within the “new vintage” methodology. While I think that the steel model is a clean buy at CHF 7,900, we all know I’d like to see how the rose-gold version looks on a NATO. Overall (and especially in steel), it’s toolish, considered, and a great chronograph for folks that maybe don’t usually love chronos.