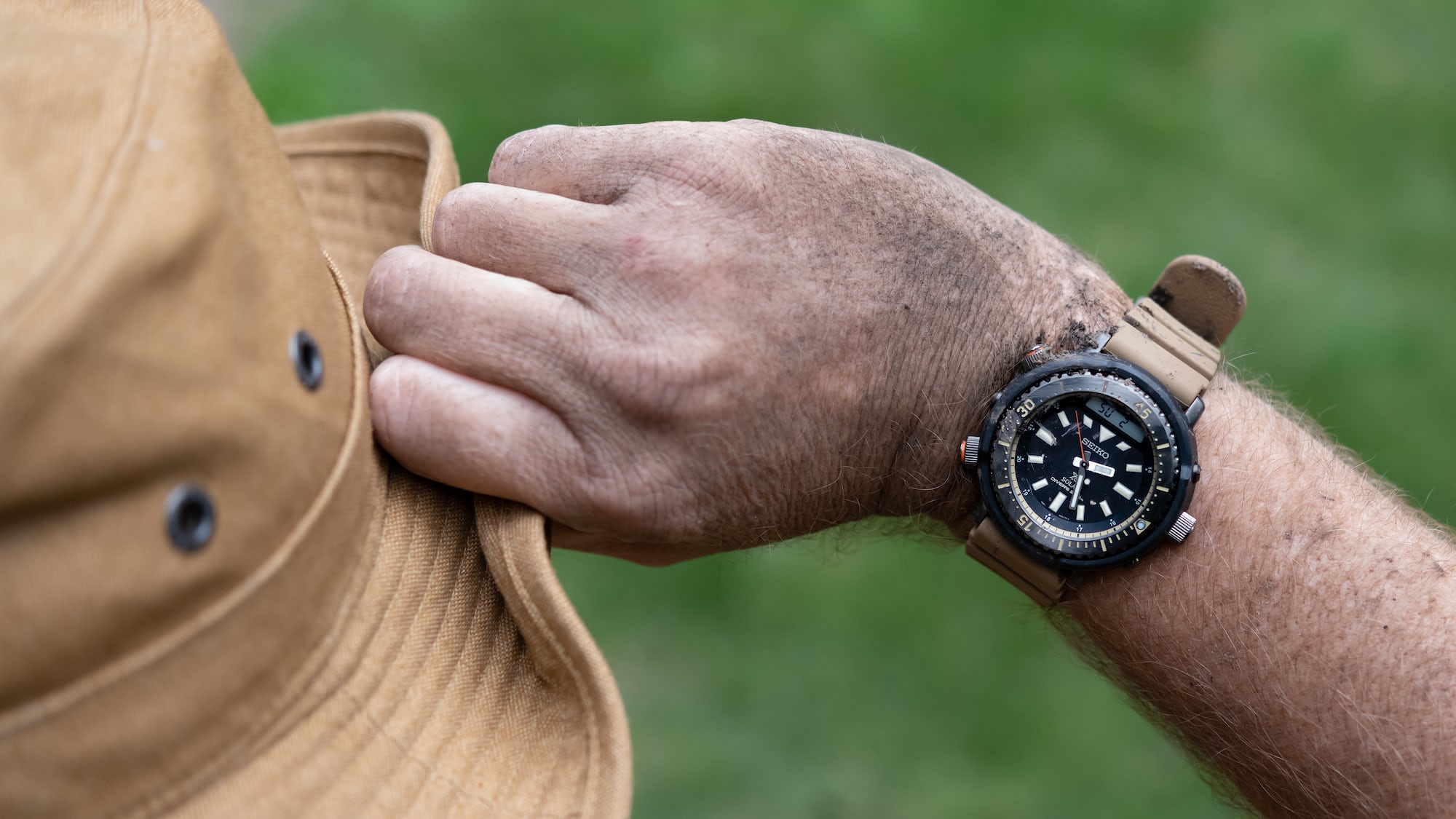 I have a confession to make: I’ve never seen Predator. Or Commando, for that matter. Take away my man card and call me a Communist, I just didn’t watch a lot of action films in the 1980s, even though I was a red-blooded American teenager when those movies came out, nor have I had a desire since. Back then, I was either reading about adventures in the jungle, the desert, at the Poles, or under the sea, or I was out in the woods with my friends having adventures of my own. And I always wanted a big watch. All the cool explorers in the magazines and on TV wore big watches. It was a symbol of high adventure, derring-do, and raw capability. No anonymous lozenge-shaped connected watches in those days. It was all big divers, mostly Seikos, Citizens, and the odd Rolex, bristling with buttons and sub-dials and saw-tooth bezels. In high school, I saved up for, and bought, a Pepsi-bezel Seiko diver. My best friend had an analog-digital Citizen Aqualand. We were our own action heroes.

No doubt you came to this review of the new Seiko Prospex SNJ029 Solar Diver expecting to read some Austrian-accented helicopter commands. But given the gap in my movie viewing history, you won’t see any “get to da choppa” references here. Anyway, this burly Seiko stands on its own, no rocket launcher or sweaty python of a wrist required. When the pair of Prospex “Street Series” analog-digital divers known for their olive and khaki colorways as the “Safarnies” (“Safari” + “Arnie”) were announced earlier this year, I didn’t hesitate, and bought one, the khaki-clad SNJ029. I guess the teen-aged me never really grew up.

As some background for the other seven people who didn’t see two of the 1980s’ biggest action flicks, Seiko’s growing collection of these analog-digital divers are inspired by the H558 diver that Seiko introduced in 1982, a watch that became famous for its appearance on the wrist of Arnold Schwarzenegger in the aforementioned movies. But that big-screen fame overshadows the significance of the watch itself. The H558 was the world’s first analog-digital alarm chronograph. It kicked off a fertile period of this very 1980s genre that spawned such icons as Citizen’s Promaster Aqualand and Altichron, and the Breitling Aerospace, which all came out a few years later.

These watches were the height of functionality, a renowned combination of analog legibility and the enhanced feature set of the digital display, all packed in a shrouded dive watch case water resistant (at the time) to 150 meters. There simply was nothing better for all-around adventuring back then. Mechanical watches were old fashioned and fragile by comparison. The G-Shock was a year away, and the Suunto Vector not even a glimmer in a Finnish engineer’s eye. The H558’s alarm could wake you for an early summit attempt in the morning, the chronograph could track your ski descent from the top, and the rotating bezel could time your dive in the afternoon. The Seiko H558 was, in fact, worn on expeditions to the top of Everest and to both Poles by the end of the ’80s.

Despite this illustrious history, it was still surprising, and indeed anachronistic, for Seiko to release new analog-digital watches at a time when trends favor luxury mechanical or bleeding-edge connected timepieces. At Baselworld in 2019, the company brought out the faithfully “tacti-cool” SNJ025 and then followed it up with a fully black-cased version and a Pepsi-bezel “PADI” version. Then, this spring, we saw the two “safari”-hued editions, the olive drab SNJ031 and the subject of this review, the khaki SNJ029.

For all these new watches, Seiko didn’t just dust off the old H558 ana-digi module. The clever little motor inside is now the solar-charged caliber H851, with a sleep function, offering synchronized analog and digital time setting and a better backlight. You still don’t get activity tracking, Bluetooth connectivity, or satellite timekeeping. But if it had those features, I’d also have likely not bought one. It’s simply not the point of this watch. In addition to what it can do, the SNJ029 also gets upgraded to 200 meters of water resistance and a more pliable silicone-blend strap in khaki. The strap retains the classic flat vent shape that Seiko pioneered, allowing for the contraction of a neoprene dive suit sleeve, and is long enough for a muscular wrist or femoral artery tourniquet should the need arise.

Most watch reviews center on wearability, accuracy, features, and finishing. But this watch is more about how it makes you feel when you wear it. Right out of the box, it’s easy to set, synchronizing the digital time with the analog hands with a twirl of the crown and the push of a button. I set the second time zone to that of my in-laws in Sri Lanka (with a 30-minute offset, mind you), checked the battery power with a long press of the top button, and headed outside. And that’s where this watch thrives, if not belongs. Maybe it’s the Serengeti color-way or the protective shroud, but the SNJ029 begs to tag along on outdoor adventures, big and small.

The best gear is that which doesn’t demand attention, special care, or distract you from what you’re doing. If you’re worried about your watch, you hesitate, you move differently, less naturally. You forget to check your pressure gauge, your depth, your handhold, your foot placement, and before you know it, you’ve gotten the bends or broken a collarbone, or simply enjoyed the activity less. This is a watch that you decidedly don’t have to worry about. I would say this watch excels because you can do anything while wearing it. Many beaters are boring, predictable – you know the usual suspects. This new safari-toned Seiko is dynamic, colorful, and fun. Grab-and-go solar charging and a $ 550 price tag don’t hurt either.

Within the first week of ownership, I went kayaking, biking, camping, and scuba diving with the SNJ029 on my wrist, not to mention did a good measure of punishing yardwork that would have had any of my mechanical watches begging for mercy. At night in a tent and inside the bowels of a wrecked schooner, the hands were predictably Seiko bright. I used the alarm for a campsite wakeup in order not to oversleep our dive charter. Transplanting shrubs and hacking buckthorn in the garden left the watch caked in mud. I won’t go so far as to say I want to abuse it, but not having to pamper a watch that is still enjoyable to wear has been a pleasure. I’ve never been a G-Shock guy, and my Garmins come out mainly for activity tracking, so this Seiko is a fine alternative and one I also don’t mind leaving behind for long periods. I know as long as it has some daylight to stay charged, it will be running and accurate when I call it up for rough duty.

But the SNJ029 isn’t just a fun beater. As part of Seiko’s “Street Series,” the company likely intended the watch to have a certain urban style, separate from the blacked-out commando vibe of the original and of the reissue. There’s a handsome interplay of colors on this watch that transcends the typical codes and nautical hues of dive watches. Tan nylon or canvas straps have been around a while, but I can’t say I’ve ever seen khaki used on a rubber dive strap, and it sets off well against the dark grey, almost gunmetal, steel of the buckle, keeper, and wraparound case shroud. The brushed rectangular hands are a nice change from the more “dive-style” hands from the 2019 editions. And the hints of orange on the sweep hand and pushers keep the palette from being too sterile.

Speaking of those pushers, they’re big and tactile, easy to work while the watch is on the wrist. Instead of screwing down tight against the case to lock out the pushers, the collars unthread outward to lock, and clockwise in to release. The orange collar indicates when a pusher is unlocked and thus less water resistant. I keep mine unlocked most of the time for quick access to the digital functions. But when diving, I locked them for secure water resistance. I typically keep the date visible on the digital display for day-to-day usefulness, but have otherwise used the chronograph a handful of times. Seiko calls the second time-zone function “Local Time,” and the digits have an “L” next to them as such, but if I were traveling, I’d be more inclined to use this function for my home time and use the analog hands for local time for quick, intuitive reading.

The digital display does have a backlight, which is far superior to that of the original H558 diver of the 1980s or any other digital watch of that era. But it still pales in comparison to the big bright dials of modern connected or digitals, due to the tiny LCD screen. Also peculiar, as James pointed out a while back, pressing the top button turns on the backlight, but it is also used to start and stop the chronograph, so you can forget about seeing a running chronograph after dark, since pressing the button will stop your elapsed time. A small nuisance. I call it quaintly nostalgic, a reminder of an era when we put up with the limitations of the technology because there simply wasn’t anything better.

Given the prominent pushers, chunky case, and long khaki strap, this watch pairs best with jeans or shorts and a T-shirt. Thus, the timing of its release during a stay-at-home pandemic summer has made the SNJ029 a perfect choice for knocking around, and it’s been on my wrist for the past several weeks, almost non-stop. From the spec sheet and photos, I figured this 47.8mm diameter watch would be a door frame buster for Austrian bodybuilders only. But like most of Seiko’s “tuna can” watches, it actually wears compactly thanks to its almost perfectly circular proportions and is light on the wrist. Still it’s no trembling flower and does make its presence known.

There’s a well-known saying among photographers that goes, “the best camera is the one you have with you.” I think the same philosophy can be applied to watches: The best watch is the one on your wrist, one that inspires you to go out and be adventurous, get outside of your comfort zone, emboldened by the intrepid march of a seconds hand even in dark, cold, wet conditions. A watch you don’t have to worry about, so you can concentrate on the adventures themselves, whether that’s camping with your kids, diving a shipwreck, or running to a waiting helicopter. The SNJ029 Prospex is one of those watches. Go on, be your own action hero.

The SNJ029 Prospex Solar Diver retails for $ 550 and more information can be found on Seiko’s website.