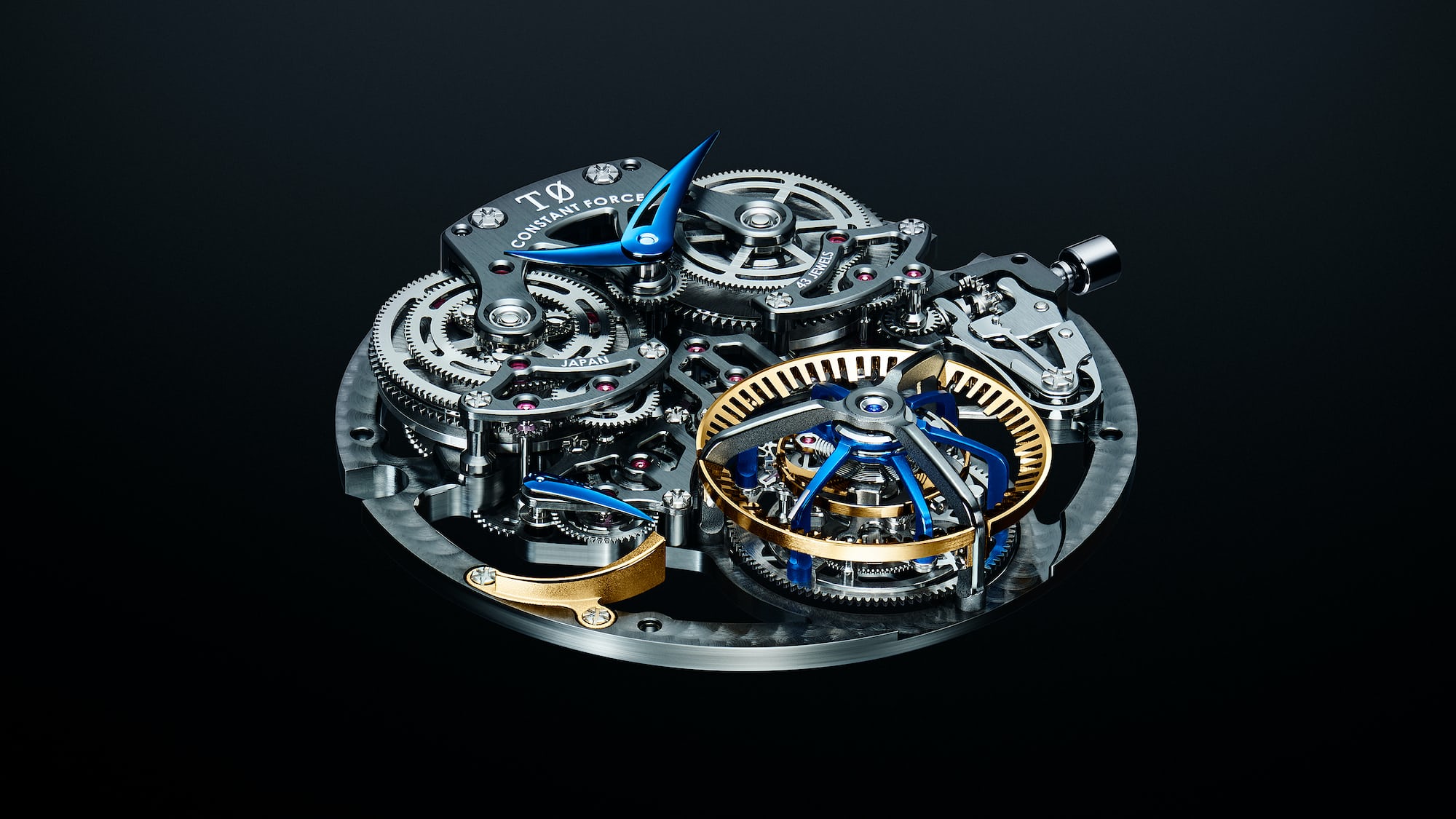 As Grand Seiko has continued to evolve over the last few years (the watches only became available outside Japan, in various international markets, in 2010, and Grand Seiko was split off from Seiko as its own brand in 2018, as HODINKEE Executive Editor Joe Thompson reported), its identity has changed enormously from the insider’s secret that it was in the earlier part of the 2000s. What hasn’t changed is the commitment to quality and craftsmanship, but the company is now available across a far wider range of prices than ever before (the idea of a near-$ 80,000 Grand Seiko is still something I’m getting used to), and Grand Seiko has become, in recent months, an obvious locus for the exploration of further refinements in technical watchmaking as well.

We have had two new calibers introduced this year – the new Spring Drive caliber 9RA5, and a new Hi-Beat caliber, with a new escapement, the caliber 9SA5. Both represented significant improvements in versatility and performance over their immediate predecessors, but the 9SA5 was, for mechanical watch enthusiasts, undoubtedly the bigger news, especially since you don’t exactly hear about new escapements every day – particularly ones that can be produced on an industrial scale (though, for the moment, the movement exists in just the SLGH002, in which it was launched).

Grand Seiko has just announced that, in parallel with the development process for the 9SA5, it was also working on a concept movement project, which according to GS helped produce data which was instrumental in the evolution of the 9SA5 into its final form. This concept movement is pretty interesting in its own right – the tourbillon caliber T0, which, in addition to being the first tourbillon from Grand Seiko, is also the first watch of any kind from GS (or any other Seiko brand, for that matter) to incorporate the constant force device known as the remontoire.

I say that this is the first-ever tourbillon from Grand Seiko, and it is. However, it’s not the first Seiko tourbillon – that was the Credor “Fugaku” tourbillon, which we had an opportunity to go hands-on with back in 2016. That, however, was a fairly conventional tourbillon at least from a mechanical standpoint, although it certainly was a dramatic piece artistically, with a very elaborate enamel dial representing a famous print by Hokusai, The Great Wave Off Kanagawa. I think there are actually some aesthetic similarities between that tourbillon and the T0 (that’s “tee zero” by the way), although mechanically speaking, the T0 is a far more technically advanced mechanism.

Leaving aside aesthetics, however, I think that the T0 tourbillon is a much closer relative to the 9SA5. Both are calibers which, though obviously designed as an expression of uniquely Grand Seiko aesthetics, also are primarily concerned with precision timekeeping, which has been, in turn, a primary concern with Grand Seiko since its inception. The T0 was designed specifically to test the limits reachable in terms of precision and accuracy, in a testbed movement implementing new manufacturing processes and technologies. The performance of the T0 over the 50-hour running time during which the remontoire is engaged is very impressive: ±0.5 seconds maximum deviation in rate per day. Grand Seiko is careful to point out that this data comes from testing under laboratory conditions, which would not necessarily duplicate real-life results, but to get rate stability, even under such circumstances, which improves on the chronometer spec by an order of magnitude, is remarkable.

There are very few watches of any kind fitted with a remontoire, and the number of watches which include both a tourbillon and a remontoire is very small indeed. Francois-Paul Journe was the first to fit a remontoire to a tourbillon in a wristwatch in 1991, but since then, there have been precious few such watches introduced. IWC introduced the Sidérale Scafusia which, in addition to the remontoire on the tourbillon, also has a sidereal time complication. There is also the little-known but most impressive and interesting Haldimann H2 Flying Resonance Tourbillon which, in addition to being a resonance tourbillon with two balances on the carriage and a flying tourbillon and a resonance tourbillon, also has two remontoires on each of the two escape wheels. We should also not forget the Andreas Strehler Trans-Axial Tourbillon, to which HODINKEE’s Nick Manousos introduced us last year. There is also an unfinished pocket watch movement by George Daniels, in the London Science Museum, which has a co-axial escapement and remontoire. The combination of a tourbillon with a remontoire is sufficiently rare and unusual that each one of these watches and their calibers – including the T0 – present unique features and mechanical solutions.

The motivation behind the invention of the remontoire (the first to be placed in a watch was one designed by John Harrison for his H4 marine chronometer, although he had invented one earlier, for the H2 experimental sea clock) is that the torque provided by a mainspring decreases as the mainspring winds down. This, in turn, tends to amplify poise and positional errors, so ideally you would have a way of supplying an unvarying amount of torque to the escapement and balance. The fusée and chain was invented to address this issue, which was most severe in the early days of horology thanks to the unavailability of anything other than plain steel mainsprings, and also owing to the sensitivity of the verge escapement (especially pre-balance spring) to variations in power. The fusée is an excellent solution, but it does take up considerable space in the movement, and as well, it doesn’t provide the most exact possible solution to providing constant torque. Strehler put it very well in his discussion of his own tourbillon with Nick, remarking, “Due to its construction with a defined fusée spiral, the chain-and-fusée only compensates a theoretical variation of the torque of the mainspring, but not the power variation of the real mainspring, friction variations, influences from complications, and so on. These factors can only be compensated by a remontoire, situated immediately before the escapement and acting like a filter.”

One interesting note on the design: The balance wheel is modeled after a Japanese symbol known as the tomoe. This symbol resembles the Chinese Taiji symbol (informally known as the yin-yang symbol) and is often found in family crests and in symbolic iconography at Shinto shrines. The symbol is very ancient and has many different levels of meaning – semiotically polyvalent, as my lit-crit friends would say.

The caliber T0 was designed by a team led by Takuma Kawauchiya over a five-year period. Power comes from two mainspring barrels which run in parallel – mainspring barrels running in series provide a longer power reserve, but running them in parallel – that is, with both feeding energy to the going train individually, and at the same time – provides double the torque, and this is necessary in the T0 to power the remontoire, which adds considerably to the power demands of the movement overall. The theoretical running time is 72 hours, however the reserve during which there is enough torque for the remontoire is about 50 hours (this reduction is par for the course with remontoires). Hand finishing is found throughout the movement (finishing the components, says GS, took about three months), and a special hardening technique was developed for the second and third going train wheels in order to reduce friction at the teeth and pinions and improve power flow. The two tourbillon cages are in blued titanium, and the balance has adjustable timing screws for rate adjustment and a flat balance spring (this is in contrast to the overcoil found in the 9SA5; the overcoil was omitted in the T0 in order to reduce the already considerable height of the movement).

Understanding how the remontoire works can be a little confusing at first – when you first look at the T0, you think you are looking at a three-legged upper tourbillon bridge, under which is a single tourbillon cage with six blued titanium arms. What you are actually looking at are two separate tourbillon cages, each with three arms. The outer cage, which carries the constant force mechanism, is driven by the gear train. The constant force stop wheel, which rotates one tooth per second to keep the remontoire spring wound, and the escape wheel, are both rotating around the same fixed wheel.

In this video provided by Grand Seiko, you can actually see the outer carriage executing its one-second jump.

If you want to see the T0 Tourbillon in person, you will have to travel to Japan – specifically, to the Grand Seiko Studio Shizukuishi, in Morioka, which is Grand Seiko’s new manufacturing facility, inaugurated earlier this year. As this is a concept piece, it’s not for sale (though it would not surprise me if once the news is out that it exists, some person, or some several persons, try to buy it anyway. Nothing piques the interest of the high-end collector like being told they can’t have something). It does not always happen that fascinating concept pieces become production watches, but it does happen occasionally – the Cartier ID One and Two concept watches remain, sadly, only (now already half-forgotten) concept projects, but on the other hand, the Piaget Altiplano Ultimate Concept watch is being series produced, which I certainly didn’t expect – in minuscule numbers, but still, it’s a production watch. I don’t know to what extent the remontoire would need to be redesigned for a non-tourbillon watch (I suspect the answer is “considerably”), but I wouldn’t mind in the least seeing a hand-wound Hi-Beat non-tourby with a remontoire. In any case, I strongly suspect that GS didn’t make this fascinating caliber just to give people who get to Morioka something to admire. In some form, I think some of this tech is going to end up out in the world, in production watches. Time, as usual, will tell.