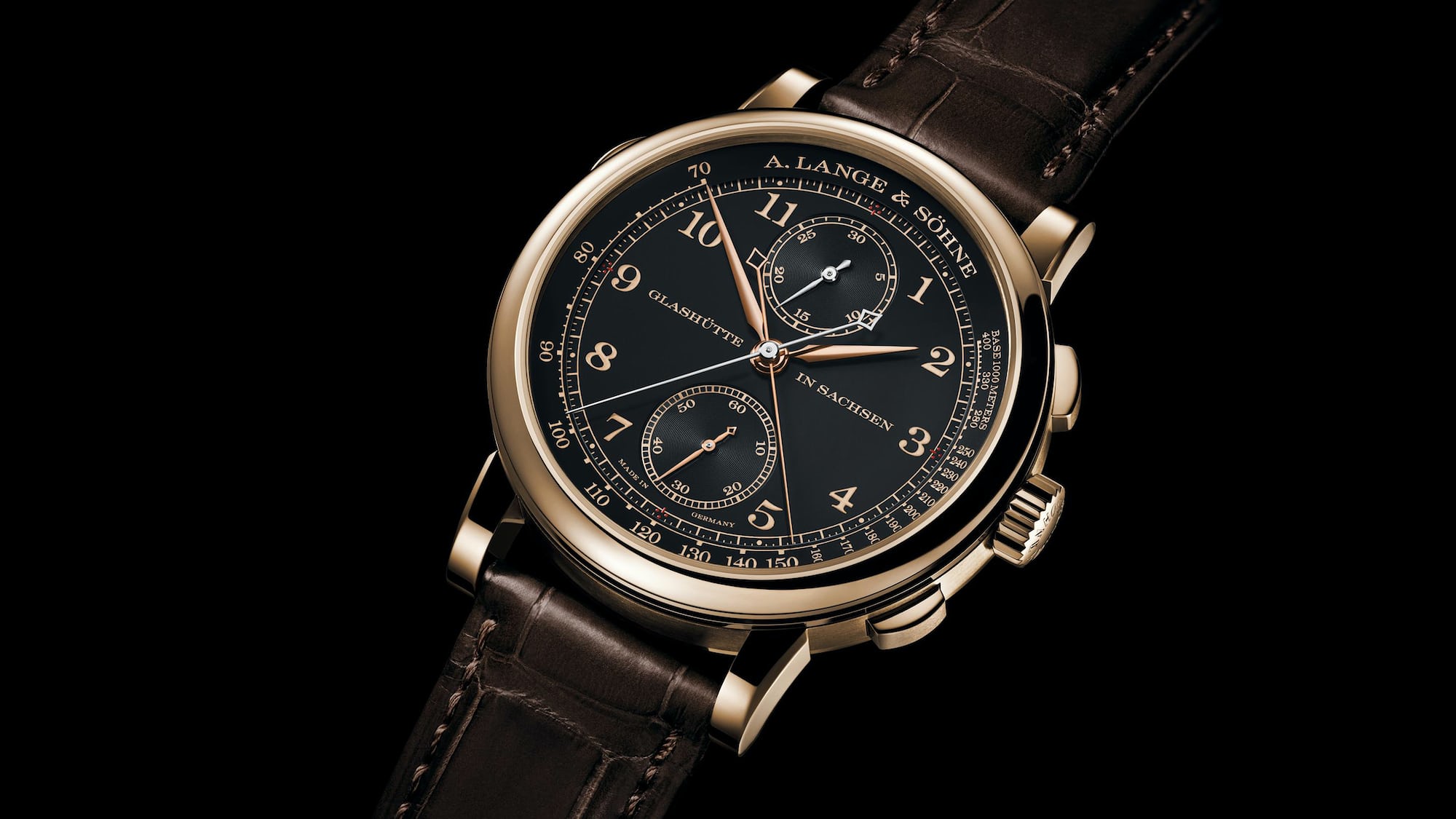 It is a bit surprising at first to hear that this is the first rattrapante-only complicated watch from Lange – your brain seizes up a little bit as you think, “Now surely that can’t be the case.” But it is. Now, the complication is far from unknown to Lange, and to Lange connoisseurs and enthusiasts, of course. We have the Double Split, with split seconds and minutes and which is, it is worth mentioning, also a flyback chronograph (both seconds and minutes), and there is also the Triple Split, which is the only split-seconds chronograph ever made which splits the seconds, minutes, and hours.

Then we get into really rarefied territory with the Tourbograph Pour Le Mérite and the Grand Complication, which includes a rattrapante chronograph with diablotine, or lightning seconds (my personal favorite candidate for a special GPHG award for least frequently made complication). However, it is indeed the case that there has never been a rattrapante-only Lange wristwatch, until now – Lange has just introduced the 1815 Rattrapante Honeygold, in celebration of 175 years of watchmaking in Glashütte (counting from the establishment, by Ferdinand Adolph Lange, of his first workshop in 1845). It is part of a three-watch launch at Watches & Wonders Shanghai. The watch case (41.2mm x 12.6mm) is in Lange’s Honeygold, which is a proprietary gold alloy that Lange says is “considerably harder than platinum” (and don’t expect to find out what’s in the alloy any time soon – it is at Lange a more closely guarded secret than what’s in the Colonel’s blend of 11 secret herbs and spices).

A rattrapante chronograph is also known as a “split-seconds” chronograph; the first modern version of the complication, with a heart-piece for the split mechanism, was created by Joseph-Thaddeus Winnerl, in 1838. It is, traditionally, considered one of the three classic high complications, along with the perpetual calendar and the minute repeater, and classically, any watch that wanted to rejoice in the title of “Grand Complication” had to incorporate all three. The rattrapante chronograph mechanism is part of this trilogy, thanks to the extremely delicate nature of the complication, and the great care that must be taken in its manufacture, assembly, and adjustment in order for it to work properly.

As with the mechanical watch itself, understanding how the rattrapante chronograph works is a bit taxing at first because it is not really like any other mechanical device with which we regularly interact.

The action of the mechanism is very light, and the chronograph seconds hand and split-seconds hand are usually extremely thin in order to reduce inertial loads on the mechanism, especially when the two hands return to a coinciding position. Precisely aligning the two hands is a taxing and time-consuming adjustment, as they must be lined up so that when the hands are running together, they appear to be a single hand rather than one superimposed on another. Usually, a classic split-seconds chronograph will have two column wheels. One is for start, stop, and reset of the chronograph works, and the other specifically is to control the split mechanism.

The new rattrapante caliber is the L101.2, and it is, in many respects, an absolutely classic example of the form. The center of attention will be the rattrapante mechanism itself, which is set up in the traditional fashion. The balance cock for the in-house screw-type balance is just visible in the above image at about 3:00, and the rattrapante pincers and split-seconds wheel are visible at the center of the movement, along with the column wheel which controls them. At about 9:00 in the image is the primary column wheel for start, stop, and reset of the chronograph.

The movement decoration is, as you would expect from Lange, exceedingly detailed and elaborate. Steel components are straight-grained or mirror polished, with mirror-finished bevels; and the German silver plates and bridges are decorated in a fine-grained finish which is similar to the fire-gilt finish used in Lange pocket watches of the 19th and 20th centuries. The chronograph bridge and balance cock are engraved as usual, but this time, the engravings themselves have been treated with black rhodium, for better visual contrast (I’m on the fence a bit about whether or not I wouldn’t prefer them left untreated – the grain of the exposed metal has a wonderful subtle beauty I feel I might miss here, but I think I’ll have to wait to see the watch in person, whenever that may be).

For the 1815 Rattrapante Honeygold, Lange has opted for an unusual configuration for the sub-dials, with the running seconds at 6:00 and the 30-second totalizer at 12:00. I don’t believe any Lange watch with a split-seconds function has ever used exactly this configuration – the Tourbograph Perpetual has the 30-second totalizer at 12:00 and the running seconds is via the tourbillon at 6:00, so that’s obviously a different animal. And both the Double and Triple Split have their running seconds and minutes totalizers in the lower position on the dial on which they are found in the Datograph Up/Down (in the case of the Double Split, the position in which you find the date in the Up/Down is taken up by a power reserve indicator, and in the Triple Split, by the split-hours totalizer). The arrangement does, I think, give the watch very much a pocket watch feel – there is something about that configuration that is catnip to anyone who (like me) cut their teeth horologically on pocket watches.

As Lange already had an existing rattrapante mechanism in the Tourbograph, I thought it might be interesting to compare the two movements. While there are some obvious general similarities, there are also major differences. The Tourbograph, obviously, has to leave room for the tourbillon at 6:00 on the dial, and for the moon-phase and perpetual calendar date indication at 12:00, so in that movement (caliber L133.1), the 30-minute totalizer is at 9:00. In the images above, you can see the large, gold-colored wheel for the 30-minute totalizer at 3:00 (in the image) in the Tourbograph caliber L133.1, and at 12:00 in the Rattrapante caliber L101.2. The rattrapante clamps, wheel, column wheel, and general arrangement of the lateral clutch is the same in both movements.

I haven’t had a new favorite watch in a long time, but this is, by golly, a contender. Now we can always quibble, and especially with Lange, arguing over details is half  – maybe more than half – of the fun. However, there is little, at least from where I’m sitting, to dislike in the 1815 Rattrapante Honeygold. The idea of a rattrapante-only chronograph from Lange is immensely compelling; I love that they changed it up a bit from the standard equilateral triangle composition that characterizes their other chronographs. The only thing that really might give anyone pause is that if we want to be really traditionalist about it, a monopusher rattrapante would have been nice, but I think the 1815 Rattrapante Honeygold has more than enough of its own Germanic charm that I don’t really miss the Genevan suavity of a monopusher. It’s another watch on the increasingly long list of things I’m going to bend over backwards to see in the metal … when I can.