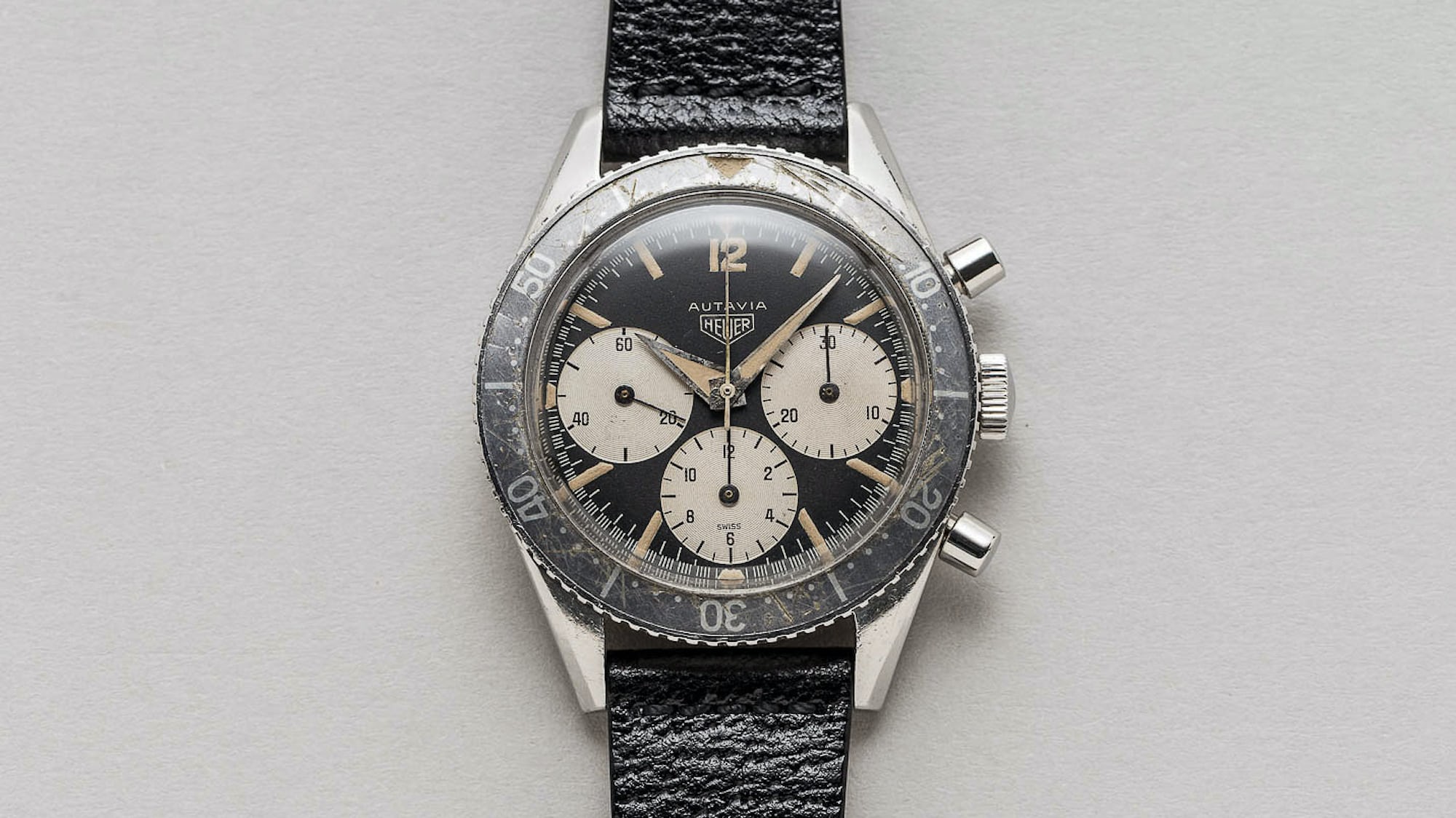 As you’ll soon see, it’s been a great week in the world of vintage watches, with a host of interesting pieces making themselves known to the collecting world. Thanks to the inclusion of a first-execution Ref. 2446 Autavia and a Zenith-powered Le Gant, there’s a strong showing of reverse panda chronographs, complemented by a sector-dial Fortis and an early diver from Girard-Perregaux rounding out the unconventional must-haves category. For good measure, there’s an outstanding Seiko world-timer with an Olympic twist.

Not to say Girard-Perregaux hasn’t released much in the way of interesting dive watches over the years, but they’re not exactly the first name that comes to mind upon mention of the horological subcategory. As much as I can respect the brand, it just doesn’t enjoy the reputation Rolex or Blancpain does within the realm, which I’d argue is a testament to other watchmakers’ genius within the realm and less so the quality of GP’s various references. History played out as it did, and there’s no changing that, but that’s not to say we can’t shed a little light on a reference of note that you’ve probably never heard of.

This is the initial iteration of the brand’s Deep Diver – its second effort in the dive watch space after the manually wound Sea Hawks. Produced for just one year in an estimated total of just 500 pieces, this is surely one of the more difficult early divers to get your hands on, and it’s got all the hallmarks you’d expect of a great, pioneering dive watch, save for a rotating bezel. These include applications of radium, red dial text, and an impressive depth rating. Best of all, they don’t seem to entirely break the bank after surfacing, but as previously mentioned, it’ll be quite the mission to find another.

One of my favorite details on this piece, which I’d bet you’ve already noticed by now, is the lower-positioned, seconds sub-dial text that reads “100 FATHOMS.” This proudly displayed water resistance is the result of GP’s decision to incorporate a reinforced crystal, along with a gasket-sealed, screw-down caseback, but is likely also the product of some friendly competition. While it can’t be confirmed, many believe this application of text to be indicative of Girard-Perregaux’s intent to take on Blancpain, along with the dive watch market as a whole. Despite the success, or lack thereof, there’s no denying the compelling nature of this reference.

An eBay seller in Miami, Florida, has this one listed with an asking price of $ 2,999, though you also have the option to make an offer. Find the full listing here.

One’s love for a vintage watch can be rooted in a multitude of places. For some, there’s a personal connection or cherished memories developed while wearing it; for others, the fondness stems from the fascinating history of the reference and one’s own journey to fully understand said history. And then there are those that fall into the sometimes unforgiving pit of horological lust, a state I’m admittedly more familiar with than I’d like to admit. Earlier this week, I found myself in that very same pit, but instead of jumping out of it myself, I thought I’d rope you into the pit with me. Come on down!

You’re looking at an 18k gold timepiece produced by Fortis, presumably in the late 1940s to early 1950s. While it measures a conservative 34mm across, it’s fitted with a properly tasteful, applied numeral-clad sector dial – the guilty party behind my attraction – which I’m sure affords it a great deal more presence on the wrist than your average watch of this size. Between the script used in displaying the Fortis name, the dauphine-shaped hands, and the ornate style of the case and lugs, there’s a whole lot to love here. Best of all, it’s a relatively affordable watch, and who’s going to complain about that?

It’s tough to say exactly what condition the dial is in, though I’d wager that it’s better than you’d expect and worth a leap of faith. That’s my one gripe here: Just one single photo has been provided by the auction house. With that said, I’m sure they’d be happy to provide additional shots should you inquire. All in all, the piece looks to be in good condition, with sharply defined case lines suggesting it’s unpolished. Like I said, I’d bet a great deal of what would appear to be dial marking and yellowing is in fact on the crystal’s surface, likely making this yet another one of those scenarios where you’ve gotta look past a weathered, albeit easily replaced, component.

Schuler Auktionen of Zurich, Switzerland, will be offering this piece in its sale taking place on Monday, when it’ll be offered with an estimate of CHF 400–600. For more details and the rest of the catalog, click here.

Once upon a time, the very watch we’re about to discuss commanded similar money to a host of modern supercars. While it used to go for 0-60-in-under-three-seconds money, it’s going for more of a six-second, decently equipped luxury sedan number at this point – and believe me, I recognize the bizarreness of these truths. Not to sound like a broken record, but I’m still confused by the hesitance of some to get into Heuer post-bust, as once again, they’re still the same watches everyone got hyped about, but now they’re priced correctly.

Let’s say you’re looking to get into the vintage Heuer game like the Kool-Aid Man would enter a kitchen or sporting event. This is the watch to do it with. Not only is it the first reference in the lineage of wrist-mounted Autavias, but like the aforementioned Girard-Perregaux, this piece hails from the first execution of the watchmaker’s production run. In the case of the Ref. 2446, first-execution pieces are characterized by the presence of a differently shaped case, along with oversized hands, sub-dial registers, and luminous numerals. The only non-first-execution facet of the watch are its second-execution hands, which are perfectly correct and would’ve been fitted to the watch at the factory. All of this has been preserved beautifully, as the photos surely suggest.

Another detail worth making note of on this piece is its caseback. The watch might not have been owned by a famous actor or delivered to a general on a military base overseas, but being a warm and fuzzy type, it’s similarly compelling in my mind. A father and mother would’ve given this to their son way back when, which would’ve been quite the gift considering Heuer’s renown during the period. They sealed the deal with the engraving of a Bible verse, and regardless where you stand on all that, you’ve gotta admit that it’s a nice, sentimental touch.

The Berlin dealer Shuck The Oyster is offering this Heuer. Its asking price has been set at €48,000. Get in touch by hitting the link.

In all honesty, I’m not the biggest Seiko guy and have often been turned off by the ways in which some advocate for collecting them. I own a good few, but have also met the GTG attendee who can’t leave without telling you about how Grand Seiko’s finishing is superior to Patek, and the guy who thinks the vintage Seiko market will soon eclipse that of Rolex any day now. At the risk of coming across too harsh, I’ll put it this way: They’re incredible watches, and there are no two ways about that, which is why there’s no need to overzealously justify one’s purchase. I’m not sure if this next piece is the next big thing, but I’m sure you’ll agree it’s a cool piece.

With this many colors and city names on its dial, the Ref. 6217-7000 could only be one thing – a world-time watch. That it is, and an interesting one at that, considering how a few cities seldom found on such complications have made their way onto its dial and the reasoning behind its inception. Seiko produced these in honor of the 1964 Summer Olympics held in Tokyo and even adorned their casebacks with an Olympic flame to mark the occasion. Given the number of foreign athletes that found themselves in town for the festivities, the potential usefulness of a 24-hour-hand-equipped world-time watch was obvious.

Unsurprisingly, this example dates back to 1964 and was either worn with extreme care or rarely worn, if ever. All too often these linen dials get dirtied over years of wear, but this one is still clean, with all original printing. The applications of color remain vibrant as ever, and the case looks to have never been polished, sweetening the deal even further. Forget “for the money,” forget “for a Japanese watch” – this thing is just plain old cool. No need to prove it. End of story.

You’ll find this one in the inventory of the Belgian dealer Perpetual Watch Lover. It’s been priced at €1,500, which seems reasonable given the pricing of other lesser examples as of late. Click here to find out more.

To wrap things up for the week, I thought we’d double down on the history lessons and do a little more learning. While scrolling through eBay this week, I had a little free time on my hands and decided to dig a little deeper into the histories of brand names I know next to nothing about. The truth of the matter is, a ridiculous number of companies produced vintage chronographs back in the day, some definitely better than others, and it’s the manufacturers behind those pieces that are worth looking into. For a little insight into a particularly tasteful chronograph with next to no name recognition, you’ll want to keep reading.

Like the dial and listing both show, this is a Le Gant. But what is a Le Gant? Le Gant was a Swiss watchmaker that primarily produced timepieces for the American department store Montgomery Ward & Co. Later on, they’d sell off the name to Seiko, but right around this period, they were onto something. Many of their watches were made using components sourced from other manufactures, including Zenith, who’s behind the Cal. 146 HP you’ll find beneath this chronograph’s caseback. Like you’d expect, the bridge signature reads “MONTGOMERY WARD & CO,” reassuring that this watch is just as it should be.

Its dial has the so-called “reverse panda” configuration that’s sought after in chronograph collecting circles, but perhaps more notable is the minimalist typeface found within the subdials. While I’m not sure if this was the brand’s intention, the size and weight of the subdial numerals forces you to focus in on the contrast, creating a pseudo “big eye” appearance without the actual big eyes. It also measures a stately 38mm across, ensuring that it won’t feel outdated, despite being a several-decade-old watch.

An eBay seller based out of Happy Valley, Oregon, has this chronograph listed in an auction that’ll come to a close on Tuesday evening. At the time of publishing, the high bid stands at $ 662. Get in on the action here.