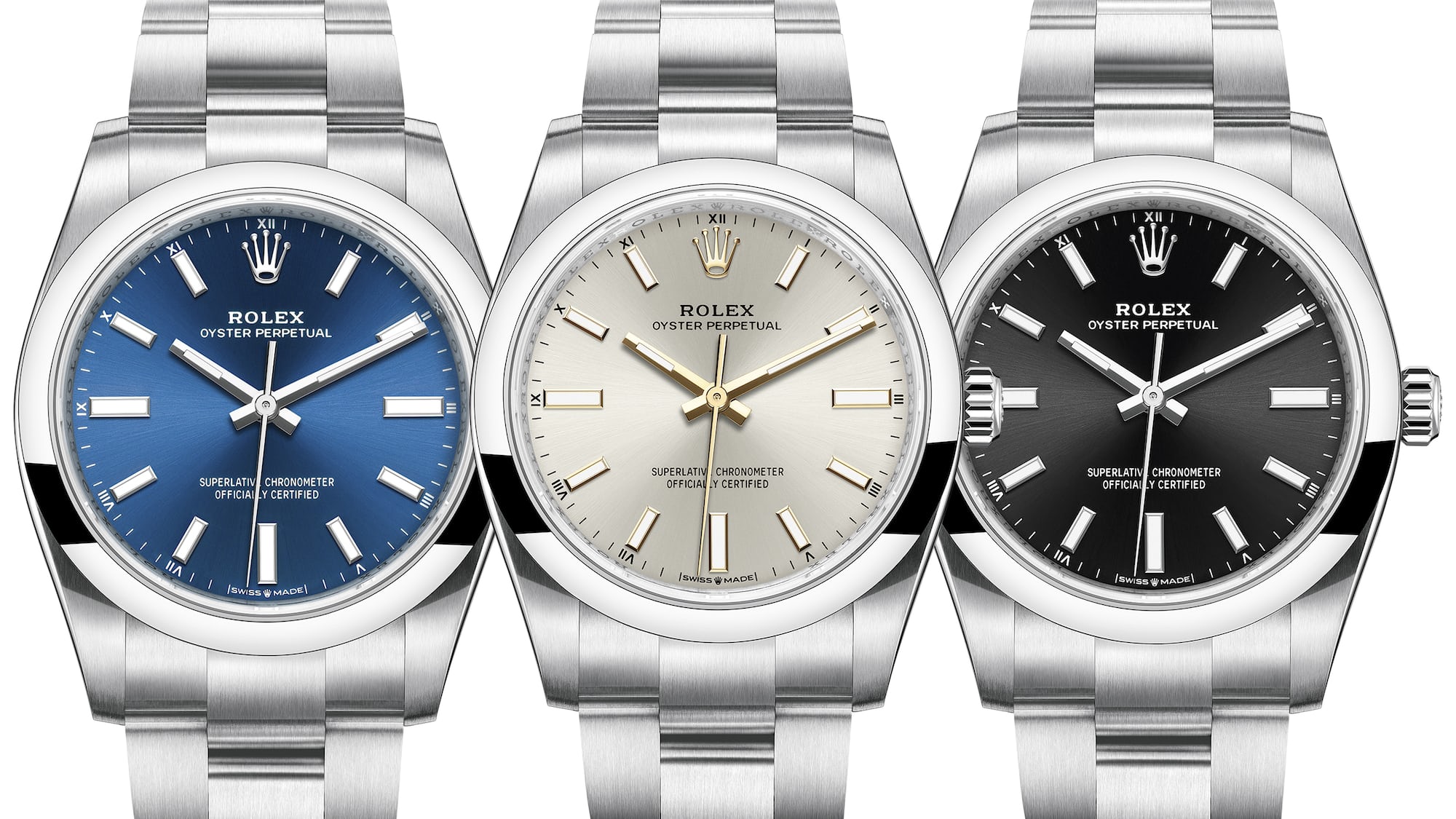 With the flurry of Rolex releases a couple of weeks ago, it’s hard not to feel a bit overwhelmed by the number of new watches that were dropped seemingly out of nowhere. In fact, just a few months back, word on the street was there would be no Rolex releases this year. Instead, we got a brand new Submariner (in a variety of metals and dial colors) with an updated movement, a Sky-Dweller on Oysterflex, and a legion of colorful Oyster Perpetual models in both 36mm and 41mm. But what if I told you that wasn’t everything? Amidst all of the chaos, Rolex discreetly updated the Oyster Perpetual 34, and virtually nobody is talking about it. I’ll be the first to admit, I came upon it by accident. My curiosity led me down a deep rabbit hole on Rolex’s website in the wake of all the new releases, and I did not expect what I ended up finding.

Much of the big news revolved around updates to movements across all of the watches released. When Rolex updates its movements, it’s news, and people hear about it. Except when they don’t. Buried deep on the Rolex website is a page showcasing the brand new-for-2020 Oyster Perpetual 34. It is actually extremely difficult to find even if you are trying to look for it, and you can forget about stumbling upon it by accident. But there’s more – you see, it is not just a new model, but also a new movement.

This is the new, in-house caliber 2232 (although it’s not totally brand new; more on that in a minute). No, it does not feature the Chronergy escapement, but instead is fitted with a Syloxi (Rolex for silicon) balance spring. This is not the first time a silicon balance spring has been featured in a Rolex watch, but it is its first appearance inside a conventional stainless steel sports model, which is both noteworthy and possibly indicative of things to come. For a bit of context, Rolex divides its watches into two categories – no, not sport and dress, but rather, professional and classic. The former encompasses what we would associate with the Submariner, Explorer, GMT-Master II, and so on. The latter is where you will find models like the Oyster Perpetual and Datejust. Nonetheless, the OP is still very much in the sports watch vein, albeit in a more versatile manner.

Rolex unveiled the first movement utilizing a Syloxi silicon hairspring in 2014 with the caliber 2236. This movement was released  inside a diamond-encrusted Pearlmaster – also a 34mm watch. At the time, Rolex called it “the movement for the next generation of women’s models.” It would go on to be featured in a host of such watches from 28-31mm. Later, we would see this movement introduced in the 37mm Everose Yachtmaster, the first watch that didn’t quite fit that mold. This new OP 34 continues in that direction. Now, we just called the 2232 a new movement and, technically, that’s true. But if you look at the 2236 and 2232 side by side, you could definitely think they’re the same movement.

By way of background, Rolex rolled out the Parachrom Bleu hairspring in 2000 inside of the Daytona. More recently, it added the Chonergy escapement to many of its pieces and – almost at the same time – redefined the Superlative Chronometer certification process (holding every piece to a standard of +2/-2 seconds per day). At one point, it seemed that every watch in the lineup was destined to be upgraded to Parachrom/Chronergy. That is what makes the rollout of the new 2232 movement – with Syloxi balance spring – all the more fascinating. Rolex definitely seems to be committed to continuing to produce two distinct paramagnetic balance spring technologies.

Interestingly, the 2232 and the 2236 do not contain the Chronergy escapement and yet are still able to attain an equal level of accuracy of +2/-2 seconds per day. The question then remains, which is better? Well, there may very well be no answer to that question. A far more interesting thing to ponder is why Rolex is producing movements with different hairspring compositions side-by-side.

In many ways, Rolex took incremental steps introducing Syloxi, from the Pearlmaster to the Yachtmaster, and now the stainless steel Oyster Perpetual. By discreetly rolling out this new 2232 movement in the OP 34 this year, it appears that Rolex liked what it saw with those prior releases. The movement it replaces is the caliber 3130, which was previously in the Submariner, Explorer, and the discontinued OP 36 range. Rolex fitted this year’s OP 36 with the new 3230 movement, featuring both a Parachrom Bleu hairspring and Chonergy escapement, while releasing the new OP 34 with the 2232 featuring the Syloxi hairspring. The decision to effectively split the Oyster Perpetual line between movement types is certainly an interesting one.

The new OP 34 received some cosmetic updates in addition to its internal ones. Unlike the rainbow assortment of Oyster Perpetual releases in 36mm and 41mm, the OP 34 is only available in four colors. In all, there is a silver dial with gold accents, a sunray black (called bright black), sunray blue (called bright blue), and a sunray pink (just called pink) dial. The Oyster Perpetual line, overall, is known for the brushed bracelet as opposed to the polished center links, applied Rolex coronet, domed bezel, and stick hands. All of that is carried over into this new release.

A couple of years back, Stephen Pulvirent wrote about the white and black dial variants of the OP line, in both 39mm and 34mm. In that article, he made a very astute observation. To quote him, he said that the Oyster Perpetual in the 34mm sizing wears “very similarly to a vintage 36mm Rolex like a Datejust or an Explorer. If those are watches that you like, but you want something modern and bulletproof, check out the OP 34 and it might surprise you.” I remember seeing a 34mm white-dial Oyster Perpetual while visiting a watch store some years ago. When I put it on, I completely understood where he was coming from. It was a surprisingly comfortable size – almost a stealth Goldilocks of a watch.

So what else is new here? Of course, there are minor tweaks – it wouldn’t be a new Rolex release without them. The outgoing model had painted squares on the outer edge of the dial which tracked with the baton hour markers. Those squares have been carried over into the new larger – colorful – OPs, but with the OP 34, they have been replaced by small Roman numerals. This was something I had to look closely to see at first, but when I did, I thought, “Huh, that is very cool.” It’s a very Rolex change, but it really works here. The filled squares can feel a bit heavy at times, and with this smaller size, the lightness of the Roman numerals brings added balance to the dial. Also note the inclusion of the Rolex coronet between Swiss and Made, signaling the inclusion of the new movement. Other than that, you have essentially the same watch as before, but with a surprise under the hood.

So there you have it, a kind-of-secret Rolex release. So what does it all mean? Well, it’s too early to tell, and I know better than to try and guess what the team over at Rolex is thinking, let alone what it has planned. It does, however, seem quite significant that they have fitted a “classic” stainless steel model with the Syloxi silicon balance spring. Could it be possible that we will see more watches in the steel sports lineup with silicon? Only time will tell. The OP 39 is dead, long live the OP 34.

The Rolex Oyster Perpetual 34mm (reference 124200) is a Superlative Chronometer water resistant to 100m. The watch comes fitted on a fully brushed steel Oyster bracelet. The case and bracelet are made from Rolex’s Oystersteel. The watch is accurate to -2/+2 sec/day, after casing. Inside the watch is the in-house caliber 2232 running at 28,800 vph, in 31 jewels, featuring the Rolex proprietary Syloxi silicon hairspring. The watch features hours, minutes, and seconds functionality, and 55 hours of power reserve. The Oyster Perpetual 34 offers a screw-down crown, a domed bezel, and a sapphire crystal. The watch is available now from Rolex authorized dealers and is priced at $ 5,300. For more information, visit Rolex.com.