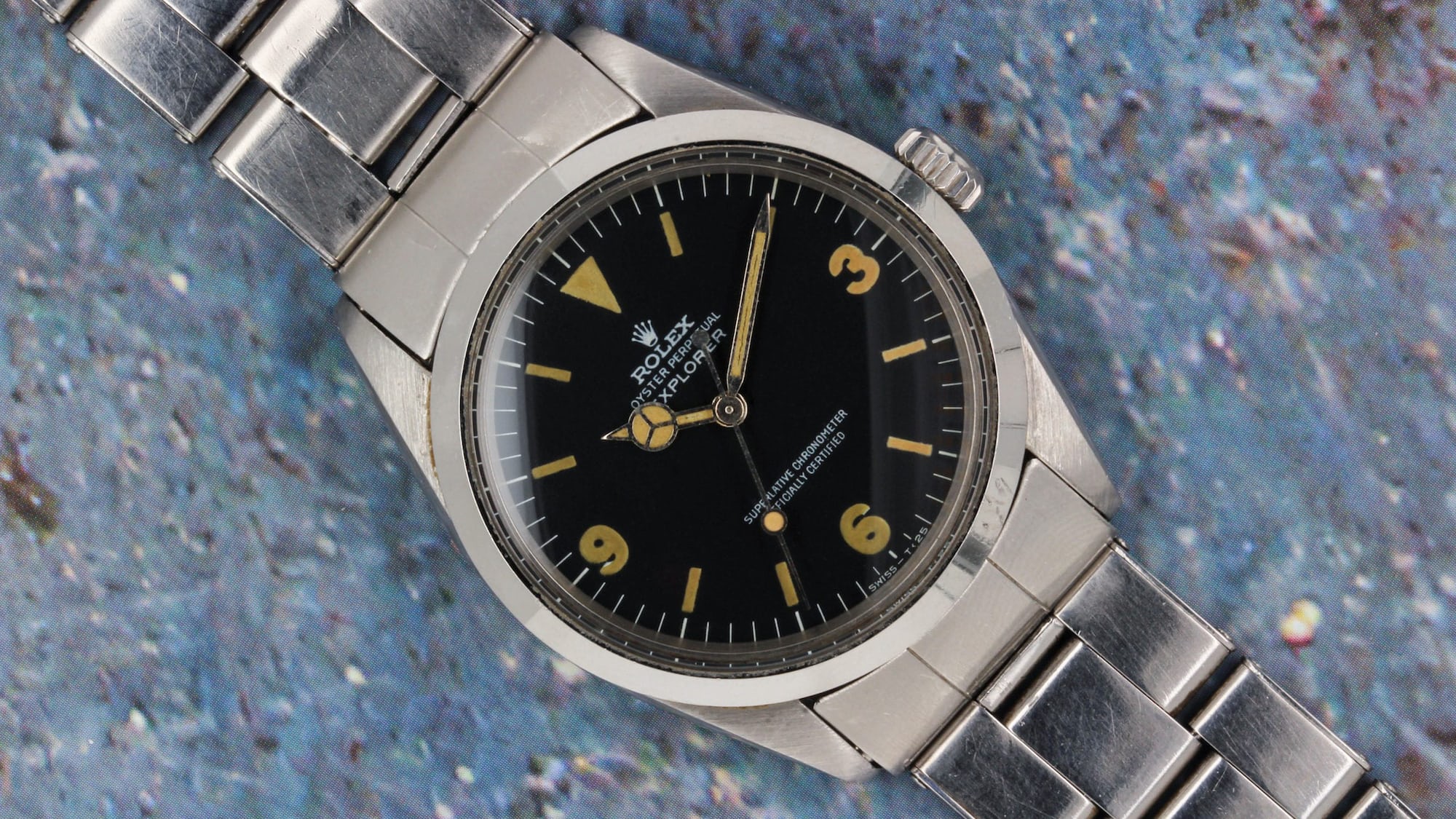 The time has come once again, and we’re back with another roundup of oldies. With the inclusion of a watch penned by a Danish design legend, you’d better believe we’re throwing you a curveball or two, but there’s still a strong Rolex showing, thanks to both a Tru-Beat and a matte dial Explorer. For the chronograph heads, we’ve got two of note this week, including the famed Nina Rindt Compax from Universal Genève, and a particularly special Heuer Carrera in yellow gold. All this to say, it’s a good one.

It’s not every day you spot a Nina Rindt on someone’s wrist, which is why striking up a conversation is more than warranted when that day comes. The first time one caught my eye in the wild was a few years back on the corner of 47th Street and 5th Avenue in New York City, waiting to cross the street. I may or may not have gotten too excited, and yielded a look of disgust after trying to buy it off the gentleman’s wrist, but my redemption came earlier this week at a red light. After pulling up and looking to my right, an iconic Compax variant stuck out like a sore thumb on the wrist of a lady driving a small sports car. As one does, I excitedly shouted “nice Nina” and sped off in search of an example to share with you.

As the presence of a printed UG logo, matte-finished registers, and luminous sub-dial hands would suggest, you’re looking at an example which hails from the watchmaker’s second execution of the reference. With a serial number exceeding 2.54 million, their presence is more than correct, suggesting the originality of its components. Though some would be quick to disagree, I’d argue that these second execution examples are more attractive than their earlier counterparts, with a more impactful appearance thanks to their updated sub-dial hands. Nothing against the thinner and more reserved hands of those corresponding with earlier serials, but the second execution packs a more distinctive punch in my mind.

Elevating this piece to that next level of intrigue is its dial, which has gone through a metamorphosis of sorts. After years of wear and exposure to the elements, the once-black registers that grace the white dial’s surface have achieved a pleasing tropical tone, with hints of brown beginning to emerge. Based on the photos, I’d wager this isn’t one of those impossibly chocolatey scenarios, and instead a more subtle tropical tone which you’ll catch only under certain lighting conditions. This isn’t to say its tone won’t further intensify with time, but it’s important to buy the watch you want today, and not the one that’ll tickle your fancy in ten years.

Craft & Tailored has the listing on this one, and they’ve set the asking price at $ 32,000. Additional details and photos can be accessed by clicking here.

As someone who’s currently in the midst of furnishing and decorating a new apartment, I’ve definitely spent more time than anyone should looking at chairs. Sensible chairs, wacky chairs, chairs I’m not sure I’ve even got the space for, etc. Without fail, Verner Panton’s eponymous S-shaped chair pops up time and time again, tempting me to no end with its ergonomic curves. The design world is a rabbit hole if there ever was one, but every now and then, it’ll lead you back to something of the horological variety.

Just under three decades after the release of Panton’s famed Vitra-produced chair, the Danish furniture designer emerged onto the scene with two watch designs. The first of the two is today’s piece in question, sporting a square case with uniquely positioned lugs. Given the unconventional angle at which the strap connects to the watch, the strap itself is a custom cut that couldn’t be more fitting for the timepiece. All of this adds up to a radical feel on the wrist, that’s admittedly along the lines of many Gilbert Albert-designed Pateks, albeit in a different league.

Despite being manufactured by Crival – the watchmaker best known for introducing the Lego watch – this piece is cased in sterling silver and has the hallmarks to prove it, not to mention a Dutch import hallmark. My favorite part about this piece is, despite being designed by Verner Panton, it doesn’t exactly scream VP, making it a notable departure of sorts from his other works. I don’t know about you, but I get excited whenever something uncharacteristic of an artist is made known.

This horological objet d’art is going up for auction on Wednesday at Quittenbaum Kunstauktionen of Munich, where it’ll be offered with an estimate of €500 – €700. Get in on the action by following the link.

Failure and Rolex are two words almost never heard in the same sentence, but upon mention of the Tru-Beat, there’s an exception to be made. Originally introduced in 1954 as a medical professional’s tool watch, the model touted a modified caliber at its core, affording the ability to track definite seconds, along the lines of what we’re now used to seeing on quartz watches. Problem was, the market for such a uniquely capable watch was rather small, resulting in its eventual discontinuation just a few years after its release. As you can guess, the model followed in the footsteps of other discontinued Rolex references, and is now quite the hot commodity.

Its appeal boils down to three main points, the first of which is, rather unsurprisingly, rarity. Having already touched upon that, let’s get into the other two, which are both design traits found beneath the crystal. Contrasting the bulk of similarly sized Rolex references, the Tru-Beat is distinguished by its crosshair dial, along with the matching red seconds hand and dial text. Even if the watch didn’t tout deadbeat seconds, this sporty touch to an otherwise standard Oyster would attract serious interest within the market.

The truly Rolex-crazed will be delighted to hear that, unlike the bulk of Tru-Beats which remain in existence today, the movement powering this piece is the same one it originally left the factory with. Given the brief period during which these were produced as a result of minimal success, Rolex didn’t manufacture a large supply of parts for the deadbeat seconds-equipped Cal. 1040. As a result, the bulk of examples which returned to Rolex for service were fitted with sweeping Cal. 1030 movements, effectively eliminating everything that makes a Tru-Beat a Tru-Beat.

Hamburg’s Cotrie Spezial Auktionen will be auctioning off this Rolex in a sale taking place tomorrow afternoon. Its estimate has been set at €5,000 — €8,000. Check it out here.

Certain individuals are bound to get into certain watchmakers, and if you’re into motorsports, chances are you either own or are after a vintage Heuer. Knowing the company’s rich history in the timing of motorsport events, this should make perfect sense, but what might make less sense is the path to take upon entry into the game. Some will be quick to point you in the direction of Autavias, or early and borderline Bauhausian iterations of the Carrera, but for a true motoring nut, this next number is likely the best option you’ve got.

You’re looking at a Carrera which dates back to 1971, and corresponds with the reference number 1158. Being a 1158 and not a 1153, it’s cased in brilliant 18k yellow gold, which has seemingly developed a layer of patina on its surface after years left unused. This reference holds a special place within the histories of both Heuer and motorsport as a whole, seeing as examples were selected and awarded to Scuderia Ferrari drivers by none other than Jack Heuer himself. If that’s not reason enough to get excited about a watch, I’m not sure what is.

As mentioned, it would appear as if the watch spent many of its years in storage instead of on the wrist. Though it was made to be enjoyed, its life to date has resulted in an opportunity to own what looks to be a near-perfect example with a flawless dial, and you can’t complain about that. To complete the look, a branded, mesh bracelet in matching yellow gold would really be something.

Bonhams will be offering this lavish Carrera in its upcoming London sale, taking place on Tuesday, September 22. Its estimate has been set at £5,000 — £7,000, and you can learn more here.

Should you need an indication that the hype guiding modern watch pricing has gotten out of hand, do yourself a favor and see what new ceramic Submariners are trading for. Now that you’ve gotten that out of the way, review their retail prices, and next, the prices commanded by top quality vintage Rolexes. I don’t know about you, but I’d rather buy in on a finite icon of another era than drop the same cash on something that’s just gone into mass production.

As you’ll likely already know, collecting vintage Rolex is all about honing in on the details. In that this Explorer dates back to 1967, and corresponds with a 1.7 million serial, it should have a splayed “frog-foot” coronet on its dial. That it does, but it’s also got another trick up its sleeve in the form of puffy luminous numerals at three, six, and nine o’clock. To contextualize the extreme desirability this variant enjoys, consider the sizeable length of the Mark 1 frog-foot dial’s run, and then compare that to the implementation of fat luminous markers, which is believed to stretch only from the 1.5 to 1.7 million serial range. In English, this means it’s a ridiculously rare variant, and the only one on the market if I’m not mistaken.

The way I see it, this variant represents the pinnacle of the serially produced, matte dial Ref. 1016 Explorers. Yes, this kind of money could put a gilt dial-fitted example on your wrist, but if we’re being honest, it wouldn’t be the example you’d want. Between the matte dial’s more hard-wearing beauty, and how objectively difficult it is to track down one featuring fat lume, this one is in a league of its own. Whether you’re looking for the final piece of the puzzle that’ll complete your lineup, or are looking to make a splash in the vintage Rolex scene, this ought to be on your radar.

The Miami dealer Menta Watches has this one listed on its site for $ 19,750. Get the full scoop here.