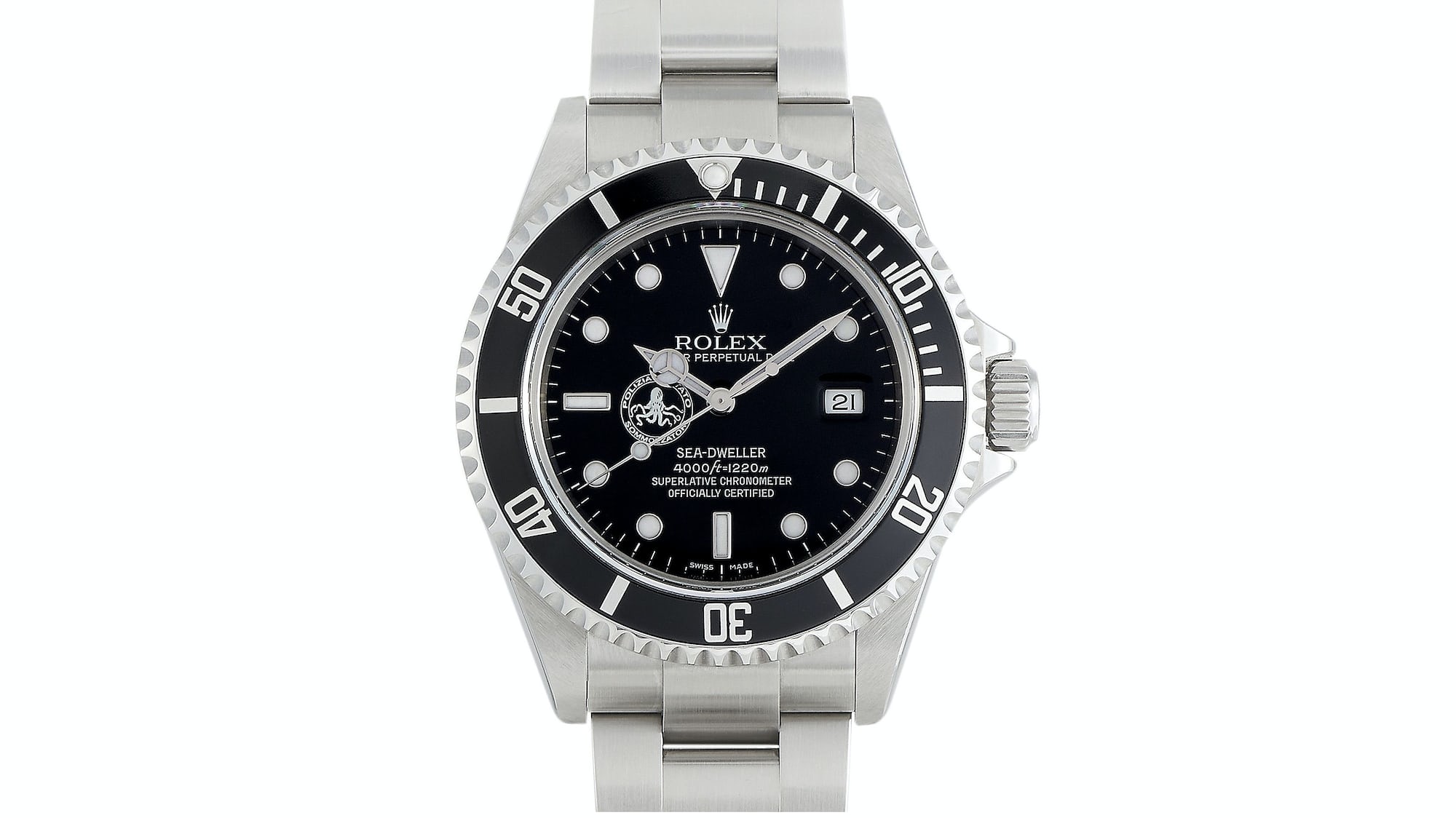 Five pieces make up this week’s selection, as per usual, but the bunch is anything but usual with a host of significant picks. For the true condition sticklers, there’s a new old stock Glycine Airman Special, along with a similarly unworn and complete Rolex Sea-Dweller made for the Italian State Police. For those that wish to venture off into more obscure waters, we’ve got a heavily jeweled Blancpain Cyclotron, a jump hour Audemars Piguet, and an Arabic Rolex display (just because).

Starting off the round-up is a watch that wouldn’t normally have me so excited. Don’t get me wrong, Glycine made some noteworthy watches back in the day, but not the sort with the potential to leave me in awe. As previously alluded to, this piece’s allure is rooted largely in the outstanding condition it’s being offered in, which I’d argue ought to be referenced by those carelessly throwing around the term “new old stock.” For all these reasons, and more that we’ll soon get into, this one sure seems like it’s going to move quickly.

You’re looking at a Glycine Airman Special, which is, as the name would suggest, a special version of the model. However, given the characterizing 17-jewel movement of the Special, it could be seen by some as a lesser variant in comparison to the standard Airman’s 23-jewel calibers. This watch came to be following the introduction of new tariffs which impacted Glycine’s ability to participate in the American market. In response, the watchmaker lowered the movement’s jewel count, allowing the new Airman Special to pass under a tariff bracket. Personally, I wouldn’t look at this model as lesser than those made for other markets, and would instead see it as a bonus, especially if you’re an American.

Now to address the elephant in the room: It’s a hilariously clean watch, with all the original fixings. From caseback stickers, to boxes, to papers, to hangtags, it’s got it all and has likely never been worn. This is no stretch towards the ideal of new old stock. This is the real deal. With that said, I still might potentially have one sole condition-related gripe. I’m not sure if it’s pitting or just plain old gunk, but there’s something black showing on the edges of the caseback in the seller’s photos. If the latter, it’s no sweat, but pitting is a different animal, though not the end of the world. At the end of the day, it’s still a hilariously clean watch, and one which you seldom see available for purchase.

You’ll find this piece up for grabs on eBay, where its Texan owner is after $ 2,695. There’s also the option to make an offer, so have at it.

If your insatiable appetite for new old stock watches is still craving more, well then you’re in luck. Unlike the aforementioned Glycine, this next piece is a bit more distinguished within important collecting circles and regarded by many to be a pinnacle of Submariner and Sea-Dweller collecting. As someone who loves the reference to begin with, I might be a tad biased, but this is truly one of the most compelling pieces within the range of neo-vintage Rolexes.

If not for the logo applied near the nine o’clock position, this would be a nice albeit uninteresting Sea-Dweller, but it is there after all. It’s that of the Italian Polizia di Stato Sommozzatori divers, which celebrated the 50th anniversary of their organization in 2008. In honor of the occasion, Rolex applied the octopus logo to the dials of its most capable dive watch at the time and engraved the casebacks accordingly. These “Polipetto” Sea-Dwellers were produced in a series of just 78 examples, none of which were made available to the public for purchase.

Should you be thinking “big whoop, it’s a Rolex with a logo on the dial,” you’re not entirely wrong, but it’s objectively significant given the infrequency with which the watchmaking icon collaborated on limited production timepieces. The way I see it, Rolex’s involvement in the development of this watch speaks to its continued dedication to supplying demanding professionals with tool watches of the highest grade, even after it already shifted to a more luxury-focused approach. The cherry on top is its rarity in comparison to similar watches produced for COMEX, which is far greater.

Luxury Bazaar is offering this uniquely configured Sea-Dweller on its site for $ 124,995. Follow the link for further details.

While I’d like to play all-knowing expert and present every last watch as an old favorite, that’s just not the case. By virtue of my interests and availability of examples to handle in person, there are still a few watchmakers whose obscurities I’ve yet to dive into, and Blancpain is one of them. Don’t worry, I’m not talking about the Fifty Fathoms lineup, but instead, the models not resurrected upon the brand’s second coming. There’s no denying the designs are less individually defined than their seafaring siblings, but that’s not to say they’re unworthy of further consideration.

This is a Blancpain Cyclotron, which I’d bet dates back to the early 1960s. At the time of the model’s release in 1959, it was the only wristwatch in the world to be powered by a 53-jewel movement, setting it apart from the available crop of timepieces in the period. With a new line of watches (aside from the already renowned dive range) powered by a high-grade caliber like the R-300, Rayville SA was proving that despite being in different hands, the Blancpain name was in capable hands. The Cyclotron is also representative of an attempt by the brand to assert itself within the sphere of something closer to haute horology, which is an exciting notion to consider given the prices at which these watches now trade.

Here’s where we deviate from the minty freshness, as this example of the highly jeweled Blancpain is no safe queen. Evidenced by the wear on its stainless steel case and the weathering seen on the dial’s surface, it’s clearly been worn quite a bit over the years, but it’s most definitely an honest watch. It would appear as if no attempt at restoring or polishing the example has ever been made, and it’s simply existed to serve to its purpose in decades past. If you’ve been after something more unconventional but still classically styled, this might be one to bookmark.

Sunrise, Florida’s Hill Auction Gallery will be finding a new home for this piece on September 30, when it goes up for sale with an estimate of $ 100 – $ 1,000. Get in on the action early by clicking here.

In case you had yet to clue in, this column serves as a vehicle for me to share the best of the best that I come across each week with you. Though, from time to time, exceptions have to be made as the best of the best isn’t always the most interesting. With this in mind, I’d like to point you in the direction of a late-1920s, early-1930s Audemars Piguet that’s surely one of the more important watches to be sold this week. It’s not without its issues, but it’s also a watch you can’t not geek out on.

As we’ve discussed before, it’s extremely difficult to track down attractive examples of early Audemars Piguet watches, let alone those featuring complications like a jump hour. Because of this, I couldn’t not include this one, even with all its flaws. These include a number of replaced and refinished components, along with a missing seconds hand. This yields a radically different price than a five-star, barn-find-esque scenario would, but it’s still a massively important complication in Audemars Piguet’s history, so much so that they’ve honored its legacy through the production of the minute repeating Ref. 25723, that can be seen as a reissue of sorts.

Another facet of this piece that affords it a little extra intrigue in my books is that it’s been sourced from a watchmaker’s workshop, along with the rest of the contents’ sales. I’m not sure about you, but I always seem to spot something unexpected and of note on visits to watchmakers, so this has me wondering what else is hiding in the shops of my usual guys. Anecdotes aside, this is an early and important watch regardless of the current shape it might be in, and if you’re not altogether concerned with 100% originality, it could yield an interesting project watch. Knowing the discerning few for whom these were originally made, and the low production numbers that translated to, it’ll likely be a while until the next one surfaces.

Antiquorum is auctioning off this piece in a sale taking place on October 1 in Geneva. It’s been given an estimate of CHF 4,000 – 4,800, which sounds about right given the shape it’s in. Check it and the rest of the catalog out here.

In that we’ve already covered a diverse few bases this week, I thought we’d end on a different note, with something that neither ticks nor sweeps. It also doesn’t serve any useful purpose other than looking outstandingly good, but logic isn’t to be consulted with most matters of the horological variety. It’s simply cool, and while I try my best to avoid that somewhat superficial descriptor, it just feels right for this one. If you’ve got deep pockets and a bit of shelf space to spare, you’ll want to keep reading.

This is a retail display Rolex would’ve produced back in the day for authorized dealers located in Arabic speaking countries. According to the seller, this specific one was purchased from a watchmaker in Dubai and is believed to date back to the 1960s. Though there aren’t any markings that would suggest a definite year of production, I’d have to agree with this date range based upon the materials and construction of other Rolex displays during this period.

If you really dissected what makes this sign so cool, you’d probably arrive at the conclusion that you’re a bit of a Rolex fanboy, but also that it’s indicative of the brand’s international renown at such an early stage. It’s marketing materials like these that helped cement the brand’s status as a top dog of sorts, and to own a piece of this history is nothing if not exciting.

This display is being sold by Jonathan Krovitz, who’s asking $ 5,400. Information and contact details can be found on his Instagram page, @johnswatches.