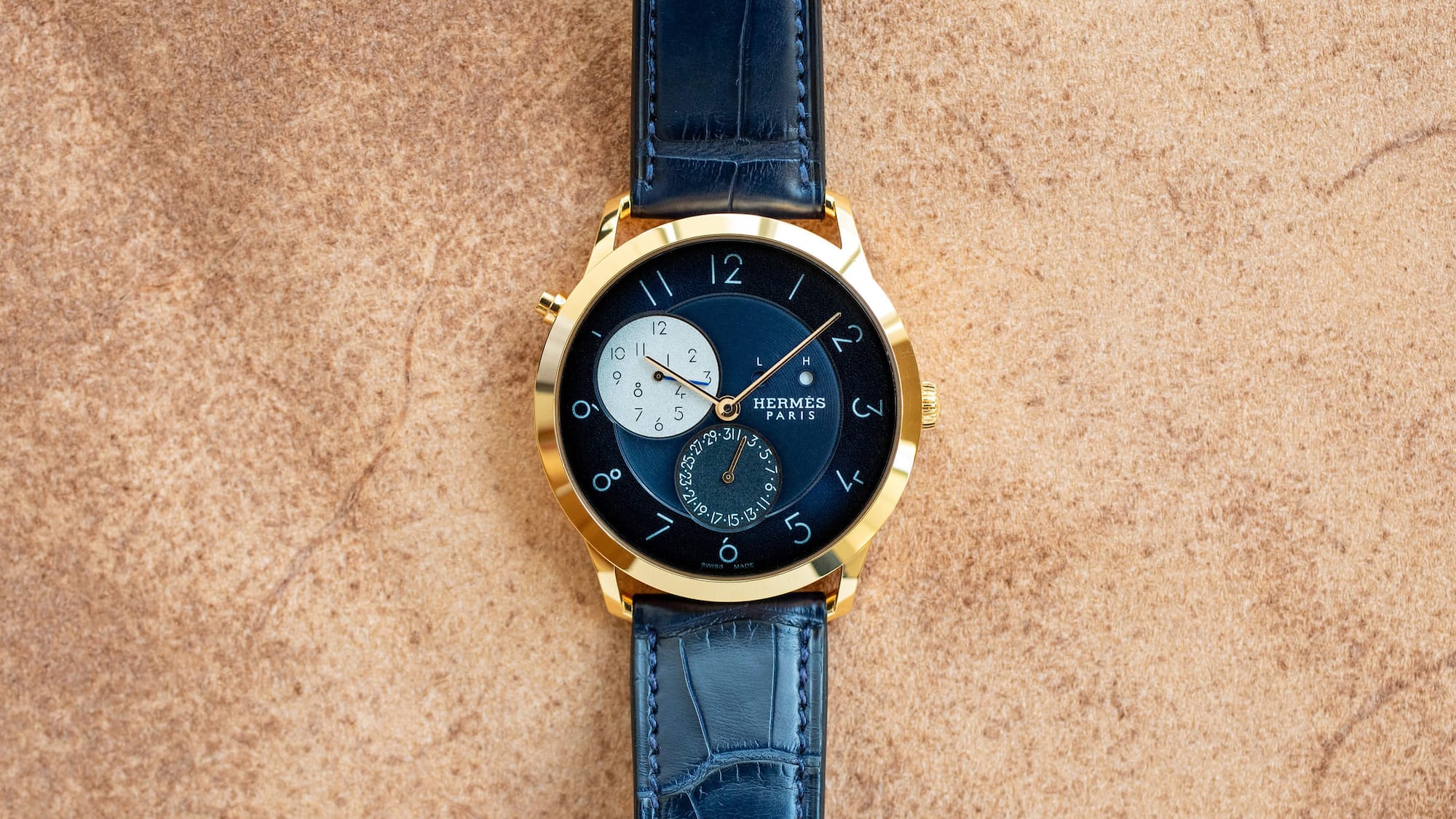 It might not be as familiar amongst Japanese, but GMT watches are popular in Europe and the U.S., where people regularly travel across multiple time zones. I began traveling internationally often after I got into the watch industry, and I’ve been lusting for a few particular GMT watches for their useful functions ever since. Of those pieces, the Slim d’Hermès GMT really spoke to me (it’s been a HODINKEE favorite as well, and we even made a collaboration model in 2018).

Once you start looking for a GMT watch, you will realize the choices are not nearly as endless as you might think. Some of the major players are the Rolex GMT-Master II, a few models from Grand Seiko, the Omega Seamaster Planet Ocean, and the TAG Heuer Aquaracer GMT. The vast majority of GMT watches use a designated hand and 24-hour markers on the bezel or dial to indicate the second time zone, and although that provides a good legibility, the rebel inside of me isn’t entirely happy with its straight-forward/literal design.

And here comes Hermès, not interested in the ordinary execution of a GMT display that other brands would do. If you just glance at the photo below, you might not be able to understand how the watch is indicating the second time zone. You might be thinking, “I see the sub-dial at 10 o’clock possibly doing that, but how am I supposed to read it?” I won’t go into details as the Slim d’Hermès GMT itself debuted in 2018, and its basic design and structure remain unchanged, but the basic idea is that the small hour hand always points at the correct hour, although the layout of the sub-dial indices are unconventional. You, as the owner alone, have the privilege of knowing how to read the watch, and the maison is showing off its creativity with this special design. The legibility and usability come first for a typical watch-specific manufacturer more often than not (which not a bad thing), and this is very Hermès in the best possible way.

The watch doesn’t carry the word “slim” in its name for nothing. It is extremely thin despite the complications inside, and the curvature of the case profile is simply breathtaking. The alligator strap, which is obviously produced by the brand, extends from the slender lugs. And this matte-finished leather strap in the color named “Bleu Abyss” creates a beautiful contrast with the highly polished 18K rose-gold case.

Now, these details are just a prelude in the eyes of Hermès. “A beautiful object must not betray its primary function” being its philosophy, the fusion between function and design is the heart of this watch.

From the functionality point of view, the highlight of this watch is the GMT feature. Hats off to the brand’s technical capabilities for putting a GMT complication into this slim design. The combination of the in-house movement Cal. H1950, which is produced by Vaucher (25% owned by the maison), and the 1.4mm-thick GMT module developed by Agenhor, which specializes in high-end movement manufacturing, isn’t something you see every day in the world of horology.

However, the real strength of Hermès is that it fused the function with the brand’s design language and denied the typical “GMT watch face” as we discussed earlier. When you look up the phrase “functional beauty” in a (Japanese) dictionary, the description would read something like, “the beauty that derives naturally through pursuing the essential form and structure without unnecessary decollations in architecture, industrial products, etc.” It is as if the definition was made of this watch. The entire watch, especially the dial design that is completely different from typical watches out there, is indeed highly legible in real life, and there is a sense of order in the design for the functions the watch carries.

The sub-dial for the second time-zone display is larger, and the black Arabic indices are placed against a white background. The font for the subdial was designed by Philippe Apeloig and is shared across all numerals on the dial, but the numbers are placed as if they were dropped in randomly. While the GMT function is the main attraction here, and it does stand out, the calendar sub-dial features a unique grain-finish, and the center part of the main dial is finished with a circular pattern. Although the dial is in a single tone of navy save for one sub-dial, it successfully creates a tasteful contrast. There is a balance across the entire dial instead of the GMT display just dominating it, and I think that is a part of the functional beauty that Hermès sees.

What is the necessity of Hermès producing its own wristwatches? The company has been manufacturing watches for a long time, going all the way back to the 1920s. It was producing pocket watches back then, and in 1978, the company founded La Montre Hermès SA in Biel, Switzerland, which was dedicated for watchmaking. There are other maison brands producing watches, but Hermès has an impressive resume that might even beat some of the watch-specific brands out there. I hypothesize that, in the company’s long history, it realized that an ideal creation could only happen when you create it yourself. And in the watch world, where the movement often dictates the design of the dial, maybe that realization led Hermès to produce its own movement to achieve the functional beauty that it idealizes. Hermès isn’t known for being open about this type of backstories, but I’m not giving up on finding out more in the near future.

If you haven’t noticed, I am very much attracted to this watch. Sadly, sometimes someone you fall in love with might just be out of your league. Although fully justified with its solid gold case, the price tag of well over ¥200,000 is a bit too much of a GMT for me as I’ve been utility-driven when it comes to my personal watches; I think my journey of a GMT watch search must go on a little longer. At least traveling abroad isn’t the thing nowadays, so I have time.