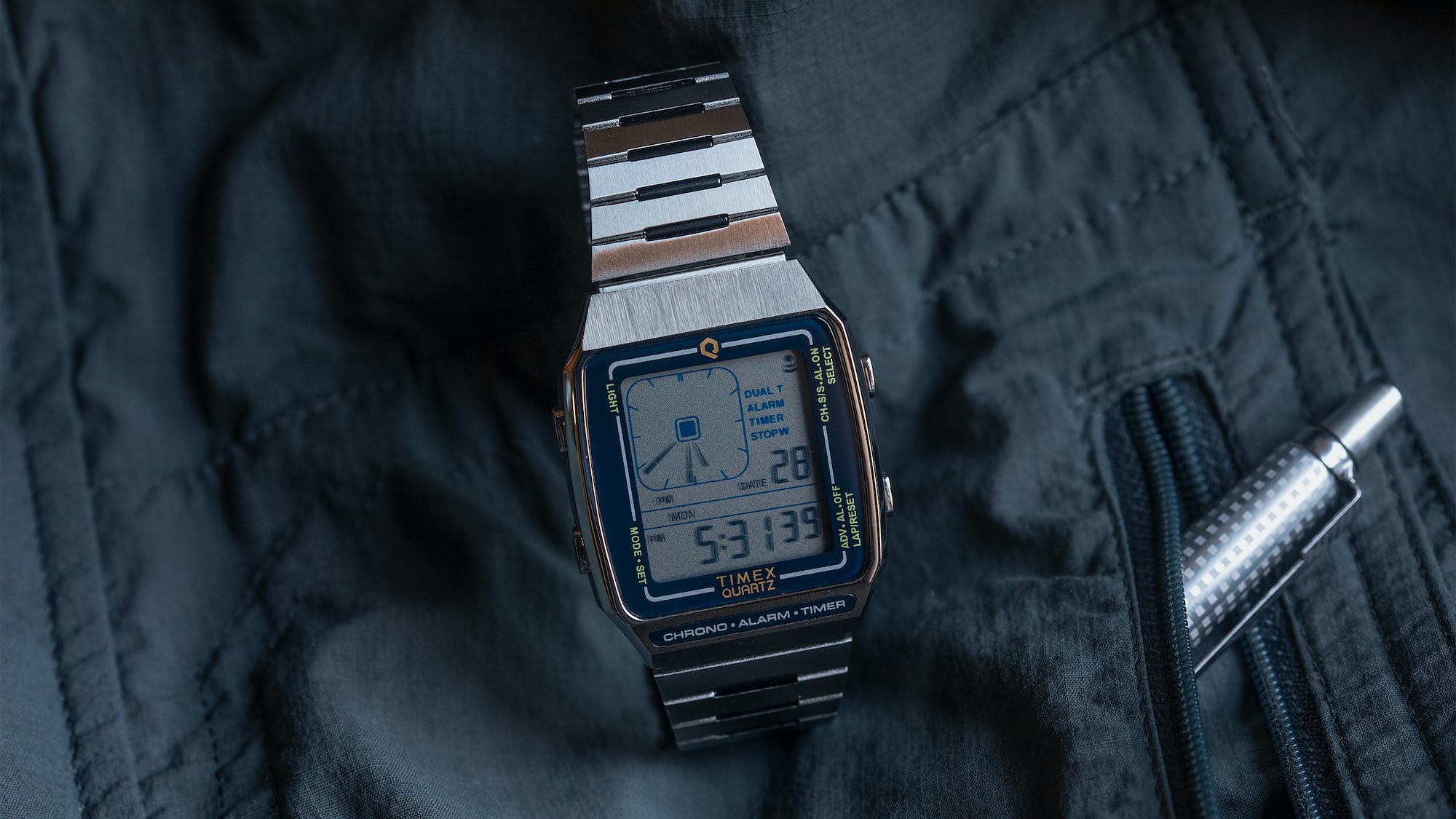 Cast your mind, if you can, back to the last century, to an era when quartz watches were in their ascendancy and during which they represented the last word in portable timekeeping technology. Quartz watches had evolved with lightning-like rapidity from the early days when they had, more or less, aped mechanical watches. They developed a design vocabulary which was all their own and which celebrated the apparently limitless potential of the new technology. Calculator watches and multifunction LED and LCD watches put complications on the wrist which would have been unthinkable just a few decades before. Not only did such watches offer accuracy and functionality, the technology itself was cool and something to be celebrated. Still, the basic visual display of time had its intuitive appeal, and a whole class of watches appeared with hybrid LCDs that mimicked, to a greater or lesser degree, the analog display of time. James Bond wore one such watch in the 1983 film Octopussy (a name so dumb I remember, despite being a James Bond fan, ashamed of myself for going to see it; I still cringe when I type it), and Casio had its Twin Graph. Not to be outdone, Timex had its LCA (Liquid Crystal Analog) watch, with its distinctive, pre-Indiglo amber side-light. Today, Timex has officially announced (although images have been circulating for several weeks now) that its own Q branch has reissued the LCA, as – well, as the Q Timex Reissue Digital LCA.

A liquid crystal display consists of a kind of sandwich – there’s a transparent front, with the liquid crystal panel underneath, and a reflective surface behind (liquid crystal displays don’t produce any light, so you need a light-colored background or, if it’s dark out, some kind of additional illumination). The liquid crystals change their orientation when current’s applied, which alters their transparency. The advantage of an LCD over a true analog quartz watch or an LED (light-emitting diode) watch is that it uses a lot less power than an LED and can display a lot more information simultaneously than an analog quartz watch, and for that reason, it’s the display technology of choice for multifunction quartz watches, and has been for many years.

Despite being a sub-$ 200 watch, the Digital LCA is of pleasantly good quality. The stainless steel case sports alternating brushed and polished surfaces that would do credit to a luxury steel sports watch, and the printing on the dial, as well as on the “chrono-timer-alarm” lettering, is crisp and well-executed even under close examination. The watch has dual-time functionality. It can, in fact, function as a chronograph, countdown timer, and alarm watch (the alarm in the sample furnished by Timex has a pleasantly loud chirp, enough to wake you up as long as you’re not a terribly heavy sleeper or in an environment with a lot of ambient background noise), and I got a feeling overall of quite nice execution. The analog display has hour, minute, and seconds hands, and the seconds hand jumps forward at one-second intervals, updating in synchrony with the digital seconds below it. There is a date display, as well. It’s a fairly small and rather thin watch – you get the feeling that, in the 1980s, there was still a lingering sense left over from, first, mechanical watchmaking, and then from the ultra-thin quartz watch wars of the late 1970s, that thin meant quality (although, by the time the original LCA came out, the G-Shock was waiting in the wings to turn that notion on its head).

The case is just 32.5mm square and 9mm thick, with a lug width of 20mm and 30M water resistance; there is a gold-tone model as well. If you have any experience with multifunction LCD watches, you will find setting and operating this one fairly intuitive; I was able to set it, and go through the various functions, without needing to consult the manual (helped along by the clearly labeled pushers).

The bracelet, as well, very much has a vintage feel. It’s quite thin, with brushed links and black-tone interlinks (which look and feel as if they’re coated with some sort of elastomer; it’s a bit hard to tell) which serve to carry the black-and-silver color scheme of the watch head through the rest of the watch as well. There is also, for better or worse, a very vintage-style adjustable clasp – it is a bit fiddly to adjust. The part of the clasp which receives the folding element can be moved up and down the bracelet, but you have to be careful – you release it by inserting the blade of a small screwdriver into the locking element, prying it up, sliding it to the desired position on the bracelet, and then pressing the locking element back down again. You have to be rather careful doing this, however – the moveable part of the clasp, and the folding element inside it, are made of pretty thin metal, and it takes a bit of pressure to lock the whole thing into place again after you have moved it, so you want to make sure that it’s positioned correctly, as it is designed to lock on one of the smaller interlinks. If you try and force it to lock on one of the main links, you will bend and possibly break it if you apply too much force. This sort of bracelet would probably elicit howls of rage if it came out today as a new design – bracelet design has come a long way since the 1970s and 1980s, and it feels by modern standards, undeniably a bit flimsy. However, it definitely feels period correct, and I think in this case the overall slightly fussy nature of the bracelet is, insofar as it matches the watch, a feature, not a bug.

Also a feature, not a bug, is the hilariously inadequate side-light. Now, you gotta be fair about this; the side-light in the original was hilariously inadequate as well, first of all, and secondly, it does allow you to read the time in the dark, with a little effort. The problem then and now is that, thanks to its position, it brilliantly illuminates the date and the function indicator and leaves the rest of the display – well, not in total darkness, but certainly much less brightly lit. You feel it would be better positioned on the other side of the case. It’s a bit as if you were watching a play in a darkened theater and, for some reason, the only light on stage was a follow-spot on a pot of begonias on a side table while, in the relative darkness around it, a marriage is noisily unraveling or a murder being plotted. However, it does the job – albeit, it seems more designed for the person who is seized by a nocturnal panic at having forgotten the date, rather than for someone wondering what time it is – and, as with the bracelet, its idiosyncrasies are part of the charm.

The appeal of watches like this is, indeed, all about the faithfulness with which the idiosyncratic details of the original are reproduced, and for anyone who thought LCDs were the bee’s knees in the 1980s (even the name is cool. Say it aloud: “liquid crystal display.” What even is a liquid crystal? How can a crystal be liquid? What dark magic is this?), this watch is a veritable Proustian madeleine. It reproduces, with great exactness, the tactile and visual experience of the original which, if you are susceptible to its charms at all, gives it the ability to produce a wave of nostalgia that, in its power and authenticity, is out of all proportion to the cost of the watch. Comes in a very nice box, as well, by the way. I enjoyed this one quite a bit, and if you remember shrinking into your seat with irritation at the name of the movie Octopussy, while at the same time thinking Bond’s watch was pretty darned neat, you might enjoy it a lot too.