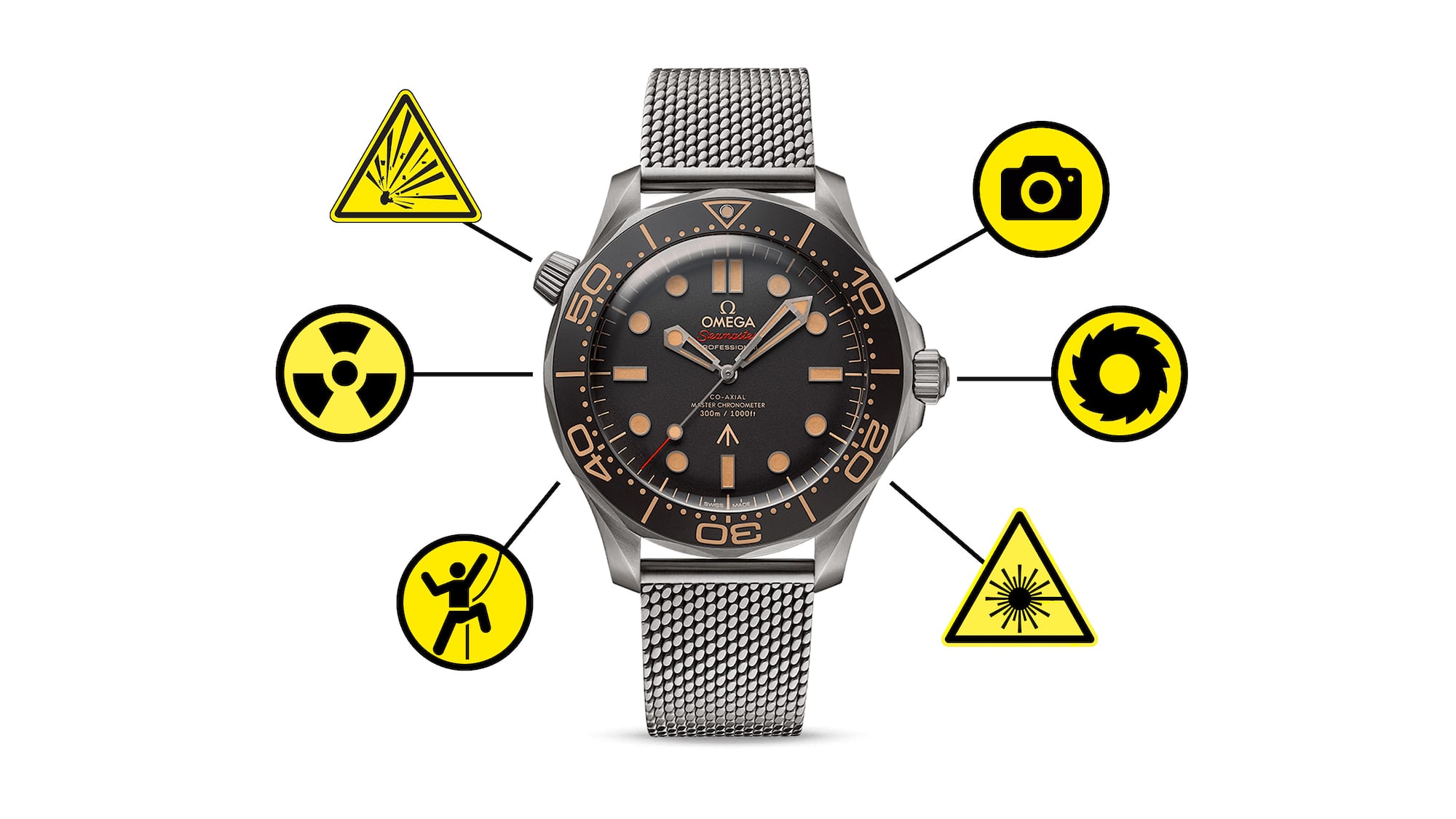 Every October 5th, fans of the most iconic fictional British spy come together in what has become known as James Bond Day, to honor the anniversary of the premiere of Dr. No in 1962. This year, we thought we’d mark the occasion by taking a trip through Q Branch’s veritable stockpile of horological treasures to select our favorite James Bond gadget watches.

With everything from buzzsaws to Geiger counters, and detonators to magnets, James Bond’s watches are rare in pop culture folklore in that they combine style and panache with showy but ultimately useful tools of the spy trade. Sure, some are a bit ridiculous, but so is James Bond – that’s more than half the fun. Here are just some of our favorites.

When I was young (and my heart was an open book), James Bond marathons on cable television were an almost weekly occurrence. During those marathons, I found myself always drawn to Live and Let Die – the film that gives new meaning to the moniker “Red Submariner.” Heck, Roger Moore himself is on record saying that of all of Q’s gadgets, the magnetic Submariner (ref. 5513) was his favorite. The film is, in many ways, anchored to that watch, as in almost every act of the story, Bond utilizes it to his advantage. In the opening scene, when 007 receives the watch from Moneypenny, he showcases its magnetic power on a spoon, and then the zipper of a woman’s dress (a practical effect that purportedly required some 29 takes to achieve).

Later, he uses the watch – albeit to no avail – to escape a swamp of hungry alligators. It isn’t until the final act that we see the watch’s full power: the buzzsaw, which Bond uses to avoid becoming dinner for sharks. The image of the white markers on the matte dial turning red is nothing short of iconic – plus, the watch gets its own closeups in the film, which automatically ratchets it up a few notches for me. This movie redefined the ideal of a “go anywhere, do anything” watch, which was something that the Submariner already represented. Lest we forget, this film also features an early version of a Hamilton Pulsar (referred to in the credits as “Pulsar, The Time Computer”).

As far as James Bond gadget watches go, Live and Let Die just gets it right.

There are any number of memorable moments in the 1977 Roger Moore outing The Spy Who Loved Me, although I will never be able to say the title, or even think of it, without also thinking of what Mike Meyers did to it in the first Austin Powers movie. Ah, the power of satire. In any case, one particularly memorable moment for me was right at the very beginning, when Moore’s Bond is called away from one of his many pre-credit sequence dalliances by a message that arrives via, of all things, a printed-out tape that is extruded from the case of his Seiko 0674 5009 LCD-display watch. In 1977, this seemed the height of cleverness to me, combining as it did two of my favorite things: an LCD watch and what was apparently a miniaturized Dymo Label-Maker, both of which I found then (and kind of still do) irresistibly cool. The message was from the ever-laconic M and read, “007 TO REPORT TO HQ IMMEDIATE. M.”

Of course, the whole thing is absurd from every standpoint – it is utterly implausible technically and probably unwise from an operational security perspective as well, but then again, two minutes later, Bond escapes from ski-borne assassins with the aid of a parachute in the shape of a British flag, so adjusted for what else goes on in the movie, it’s probably perfectly reasonable. Unlike so many other Bond gadget watches, this one is hilariously useless even if you can suspend disbelief – but it’s still a ton of fun.

The Breitling Top Time modified by Q to be a Geiger counter and worn by James Bond in Thunderball is among the more prominent gadget watches in the movie franchise’s history. It figured in the film’s plot, and then had a remarkable second life when it was purchased much later for 25 Pound sterling and auctioned off at Christie’s in 2013 for £103,875. In the film, Q gives the watch to Bond so that he can use it to detect the emission of nuclear radiation.

It was not the only Geiger counter to appear in the Bond series. In 1962’s Dr. No, Bond tests another Geiger counter by running it over the dial of his Rolex Submariner. But the Breitling was the first Q-modified watch to be given to Bond. The one seen here is a Top Time ref. 2002, and we wrote about it back when it came up for sale in 2013.

This might not be Q’s most exhilarating invention – the red chronograph seconds hand is meant to be a compass – but I do think it might be the coolest Bond watch after the famous Big Crown that appears in Dr. No. The sleek pre-Daytona chronograph is one of my all-time favorite Rolex references for its understated looks and modest size, and the red seconds hand really pops against the silver dial.

As far as the movie itself is concerned, the watch and the stunning Swiss scenery are basically the only reasons to watch. Despite On Her Majesty’s Secret Service being one of the best Bond novels, Fleming’s smart, sharp source text ended up a mess of a film, with hammy acting, a thin plot, and way too many ruffled shirt fronts for my taste.

In 1999’s The World Is Not Enough, we are introduced to the latest and – in my opinion – best gadget-packed Omega from Q-branch. With a convoluted plot that sees the ever suave Brosnan fighting an international effort to destabilize the oil market by way of a wide range of high-action tomfoolery, this may be a Bond that few qualify as a must-watch entry from 007’s past, but the watch is pure late ’90s excess. Based on a Brosnan-era Seamaster 2531.80, this special creation sports not only a bright array of LEDs on the dial (which Bond uses like a flashlight), but also a repel-ready, 50-foot microfilament line that features a handy grappling hook. While little more than spy-fantasy, this Omega does manage a useable and versatile feature set, which is something that can’t be said for many of Bond’s more explosive gadgetry.

During my coming of age, it was the Seamaster 300M that was the Bond watch. Looking back, it fit Bond perfectly: it presents with an air of refinement, but it gets down and dirty when it needs to. And the particular example in Die Another Day certainly gets down and dirty – the watch houses a detonating pin used to ignite C-4 plastic explosive by placing the pin in the C-4 and turning the bezel to activate the detonation.

C-4, a British creation, is relatively stable and needs a strong shockwave from a detonation device to explode, so it’s not entirely far-fetched to believe a device like this exists. Besides the inherent boyish fascination with explosives, I like this gadget for the fact that it’s entirely pertinent to the job. It’s a tool I would expect someone in the intelligence community out in the field to have in his or her arsenal. What’s more Bond than stylish timepieces and large explosions?

Buzzsaw bezels, detonators, and abseiling wires are all well and good, but in my mind, the best Bond watch gadget was… the watch itself. And for that, you have to go back to Ian Fleming’s own writing:

“Bond surveyed his weapons. They were only his hands and feet, his Gillette razor and his wrist-watch, a heavy Rolex Oyster Perpetual on an expanding metal bracelet. Used properly, these could be turned into most effective knuckledusters.” – Ian Fleming, On Her Majesty’s Secret Service, 1963.

This was the practical, quick-thinking Bond, on his own in a villain’s mountaintop lair, with none of Q Branch’s wizardry at hand. He’s a man who gets by on his wits and what’s around him. And when it’s time to make his escape on skis, in the middle of the night, he first needs to dispatch a henchman. Simple, brutal, effective, with little regard for his watch as anything but a useful tool. Leave the flashy stuff to the movie star Bonds.

“Bond’s right flashed out and the face of the Rolex disintegrated against the man’s jaw.”