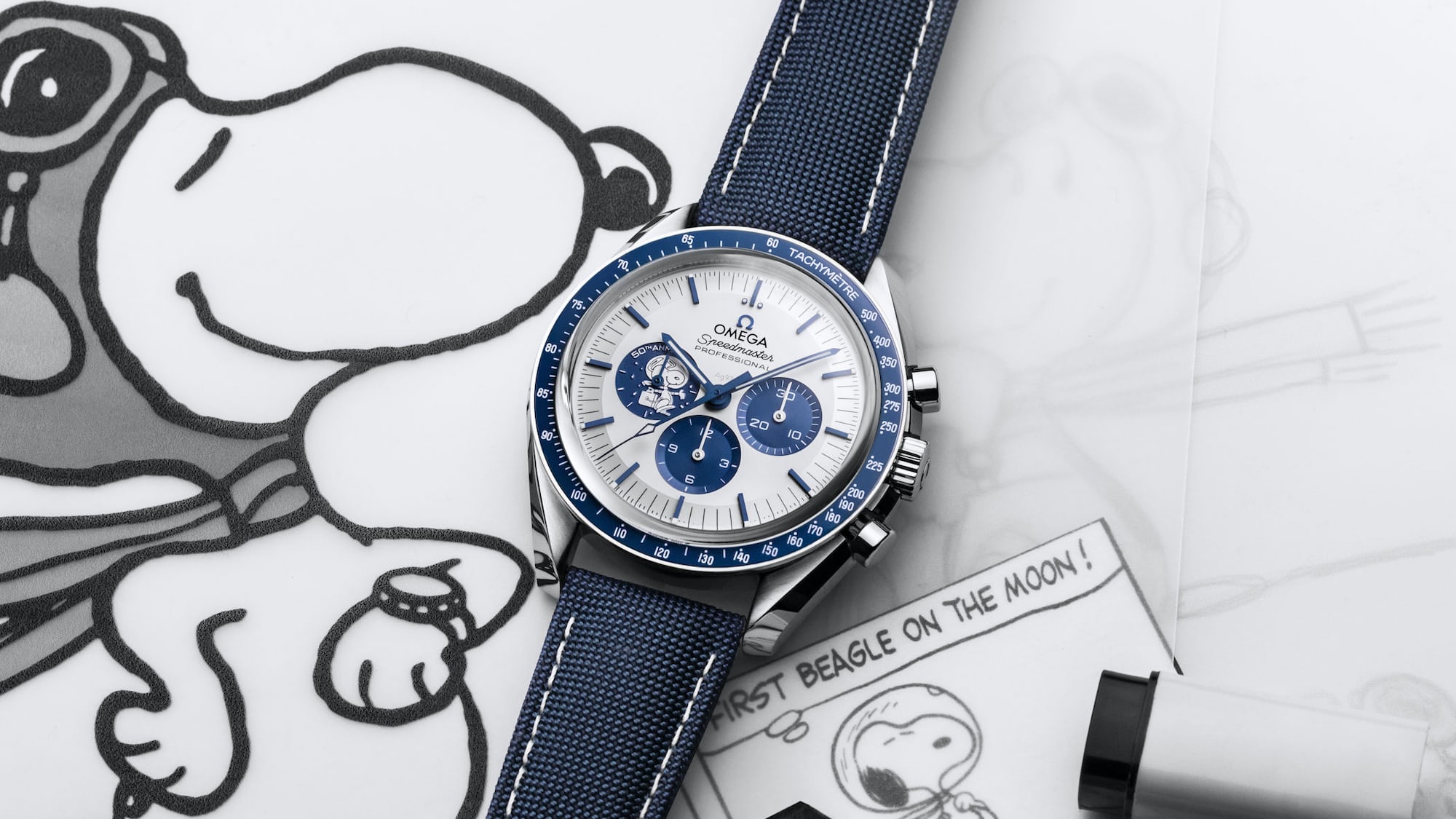 Over the past week, there were whispers that Omega was going to release a new Speedmaster. Well, as the whispers turn to screams, we finally know what that watch is – the new Omega Speedmaster “Silver Snoopy Award” 50th Anniversary. Like the two limited editions that preceded it, this watch pays homage to NASA having presented the Silver Snoopy Award to Omega following  the most successful, unsuccessful mission of all time: Apollo 13 (for more on that, check out Jack’s In-Depth). This new release commemorates the 50th anniversary of that very award – presented on October 5, 1970 – and boy does this watch know how to celebrate.

The new 50th anniversary model is presented in the classic Speedmaster steel 42mm case, but with blue accents on the bezel, hands, markers, and Omega insignia – even the strap is blue. Oh, and of course it features the iconic Snoopy illustration in the small seconds sub-dial. The watch also features a decorated caseback, which I will get into momentarily. I would be remiss not to mention possibly the most interesting tidbit about this release, which is that – unlike previous Silver Snoopy models – this is not a limited edition. Yes, you read that correctly.

The last Silver Snoopy LE was released in 2015 and featured a stark white dial, with a luminous snoopy in his signature “sleeping on top of the doghouse” position, with a thought bubble echoing the famous line from the 1995 film, Apollo 13, “Failure is not an option!” More than that, it contained text reading “What could you do in 14 seconds?” referencing the 14-second firing of the lunar module’s rocket engine to get the Apollo 13 astronauts home – timed with an Omega Speedmaster.

That model and the 2003 LE (featuring the more jubilant, spacesuit-clad Snoopy) have become most desirable on the secondary market, fetching some pretty wild prices. This new 50th anniversary piece is actually quite reminiscent of the original Silver Snoopy in terms of the placement of snoopy and illustration used. You also might see a resemblance to the popular Blue Speedy (which you can see in Wei Koh’s Collection in his episode of Talking Watches along with a white-dial Silver Snoopy), because – well – it is also blue. Look closely at this watch, and you will also see a Speedy Easter egg in the form of the “dot over ninety.”

The dial of this watch is silver and laser-engraved with Ag925. It includes three more blue sub-dials – the sub-dial at nine o’clock featuring Snoopy appearing as an embossed silver medallion with the words “50th Anniversary” appearing overhead. This is the most direct homage the watch offers, as Snoopy is presented in the exact style of the silver pin that NASA astronauts present to award recipients. The watch also features blue PVD hour markers and hands. The caeback, however, is something completely new and completely cool. It features an animation of the moon, the earth, and Snoopy himself inside of a white Command and Service Module (CSM). As this is no ordinary caseback, there is some magic involved.

Omega has created what they are calling a “magic hand,” which allows Snoopy’s CSM to move. When the chronograph function is initiated, Snoopy and his ship travel around the far side of the moon – an homage to the trip taken by the Apollo 13 crew. The Earth disk rotates once per minute, in tandem with the watch’s small seconds hand to symbolize – quite literally – the rotation of the Earth. There is also the quote, “Eyes on the Stars,” included on the back.

The watch is powered by the METAS-certified OMEGA Co-Axial Master Chronometer Calibre 3861 and features a blue ceramic [ZrO2] bezel ring. Just like the preceding Silver Snoopy, this watch comes fitted to a nylon fabric strap, only this time in blue with white stitching. It has been 50 years since NASA presented Omega with the Silver Snoopy Award, and this release is not just a fitting tribute, but is as playful as the insignia which represents the award itself.