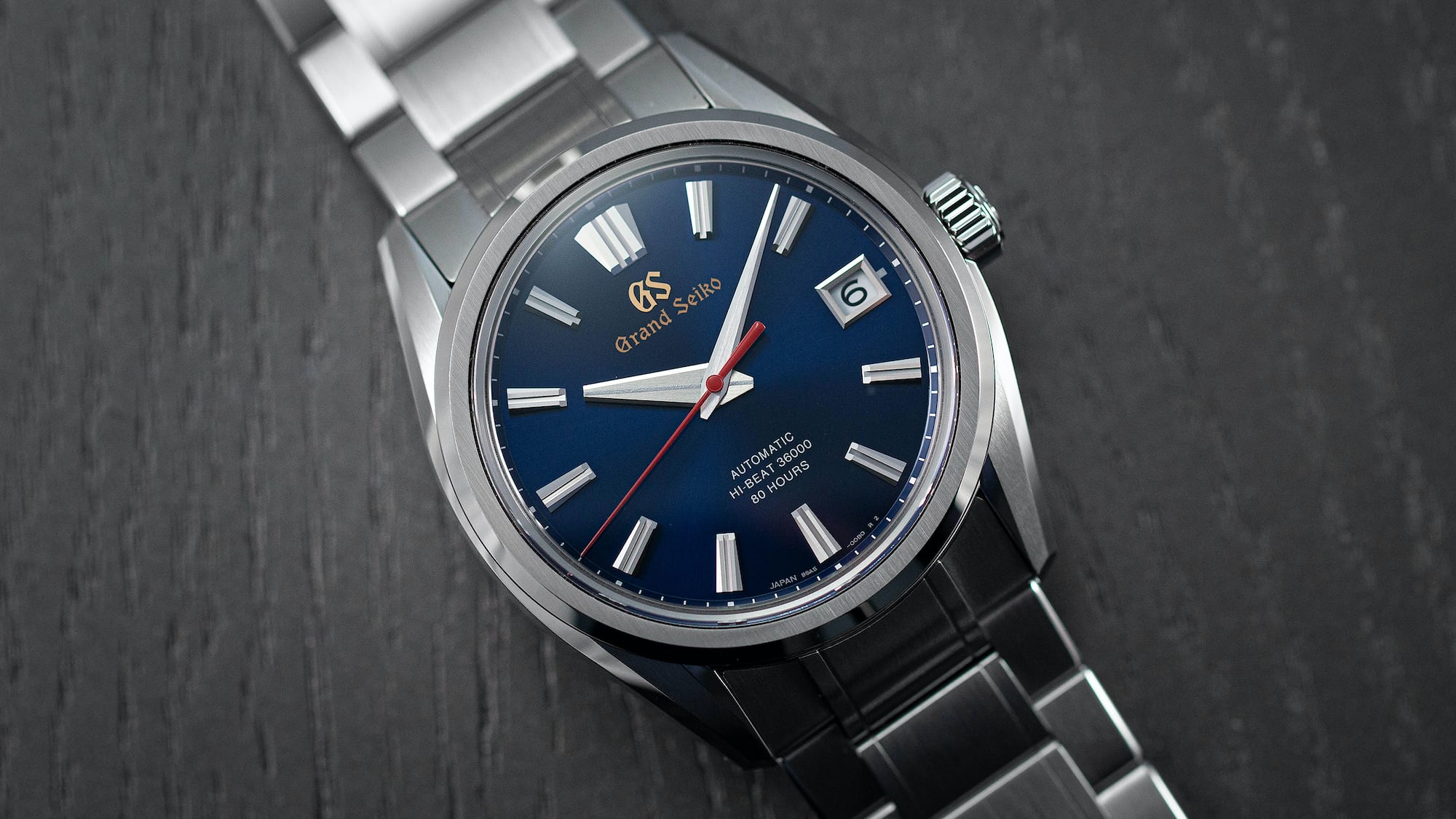 Back in March, we introduced the first watch to use Grand Seiko’s new Hi-Beat movement, the 9SA5. That watch, SLGH002, which Jack later went in-depth with, was a dressy, limited edition run of 100 pieces.  The new movement inside it was nine years in development and marks a new generation of mechanical calibers at Grand Seiko. Now, we’re seeing the movement in a new guise: a stainless steel watch, which is also part of the brand’s 60th-anniversary releases.

As expertly explained in Jack’s two articles on the SLGH002, the main point of interest in this watch and the 9SA5 movement, in particular, is its implementation of a truly new escapement, the advent of which is an event that, as Jack put it, “represents a moment in horological history which one might never see in the course of an entire human lifetime. There have been, despite thousands of experiments, only a few escapements to see really widespread use: The verge, the cylinder, the lever, and the co-axial, and that is over a period of five hundred years or so of watchmaking.” As a reminder, the SLGH002 came dressed in yellow gold with a price tag of $ 43,000. The new SLGH003 comes dressed in a more democratic material, stainless steel, and with an approximate price of $ 9,700.

The new SLGH003 is a watch that brings the promise of the dual-impulse escapement to a larger potential collector base and at less than a quarter of the price of the watch in which the 9SA5 debuted. As revolutionary as both of these watches are, with their shared movement and the new escapement within, it’s interesting to look at the SLGH003 and note how immediately recognizable it is as a Grand Seiko. There isn’t anything about it, dial side, that might clue you in to the fact that you are looking at a watch that is fundamentally different from any that Grand Seiko may have made in the past. The hands and dials are immaculate as always; the angled, Zaratsu polished case has the hallmark geometric tension and drilled through lugs; and every aspect of the watch appears to have been constructed in a way that achieves a high level of finish without sacrificing anything in the arena of daily wearability, sturdiness, and longevity. Aesthetically, the SLGH003 is thoroughly a Grand Seiko. That is for sure.

The blue dial has a rich and reflective texture to it and, as has become something of a Grand Seiko trademark, it is the interface that really stands out – the red seconds hand providing a nice touch in the form of a contrasting accent. It’s the kind of dial that I could see myself stopping to look at many times over the course of a day. If you’ve ever had that experience of pausing to look at your Grand Seiko in late afternoon light, catching the reflections from its diamond-polished surfaces and being transfixed by them, then you know what I mean. Making watch dials that offer such powerful payoffs for the wearer without seeming cluttered or overly encumbered is, I think, one of the biggest challenges facing a watch designer, and Grand Seiko has for years made this task seem almost too easy. Even the date window, which is here characteristically fully framed and in proportion with the other dial furniture, feels not like a distraction, but a very welcome and carefully integrated element of the design. Notice the folly of some other date windows, and you will come to appreciate those of Grand Seiko even more.

Of course, under the hood is an entirely new movement, which comes with Grand Seiko’s new Dual Impulse Escapement. This escapement is quite a bit different from the more conventional lever escapements found throughout the rest of Grand Seiko’s mechanical watches. The Dual Impulse Escapement is explained at length in Jack’s Introducing post for the SLGH002, and again in his In-Depth. But just as a quick refresher, the main feature that sets the Dual Impulse Escapement apart is the way in which it delivers energy in both directions of the balance’s oscillation. In one direction, the escape wheel delivers power directly to the balance (on its roller, via one of the escape wheel teeth), and in the other direction, the power comes from the pallet fork. The whole system has been devised in a way that reduces the sliding friction to when the balance is impulsed in just one direction. The new free-sprung balance, held in place by a full balance bridge, has an overcoil balance spring and inertial weights in the form of four screws on the wheel – both firsts for Grand Seiko.

Beyond its new escapement, the 9SA5 has two barrels delivering an ample 80 hours of power reserve and, as you can see in the above photo, the level of decoration and the beauty of the movement are quite high and certainly in line with Grand Seiko standards. The open rotor is itself decorated for the anniversary year and offers an expansive view of the movement. And the decoration of the movement takes inspiration from rippling waves of the Shizukuishi River, not far from the Grand Seiko studio where the watch is made.

You get a bracelet with the SLGH003, and it comes with a clasp that is decorated with the Grand Seiko initials in gold. A bracelet makes sense given the comparatively sporty character of this watch versus that of the SLGH002. The look is sturdy and utilitarian, and it’s good to have a bracelet as opposed to just a supplied leather strap – it really opens up the watch to being worn year-round. Maybe it’s because we’re just entering the heart of strap season, but I’d be lying if I didn’t say that on seeing this new watch, my thoughts went to leather straps. I think the SLGH003 would find a willing companion in a rich, casual, chocolate-colored leather strap, or even a grey one that might pick up the blue notes of the dial.

This is a beautiful watch, and an important one. It’s surely a sign of more good things to come from Grand Seiko, and that is a very exciting thing indeed. The Grand Seiko SLGH003 will be available at Grand Seiko boutiques and select retailers worldwide.