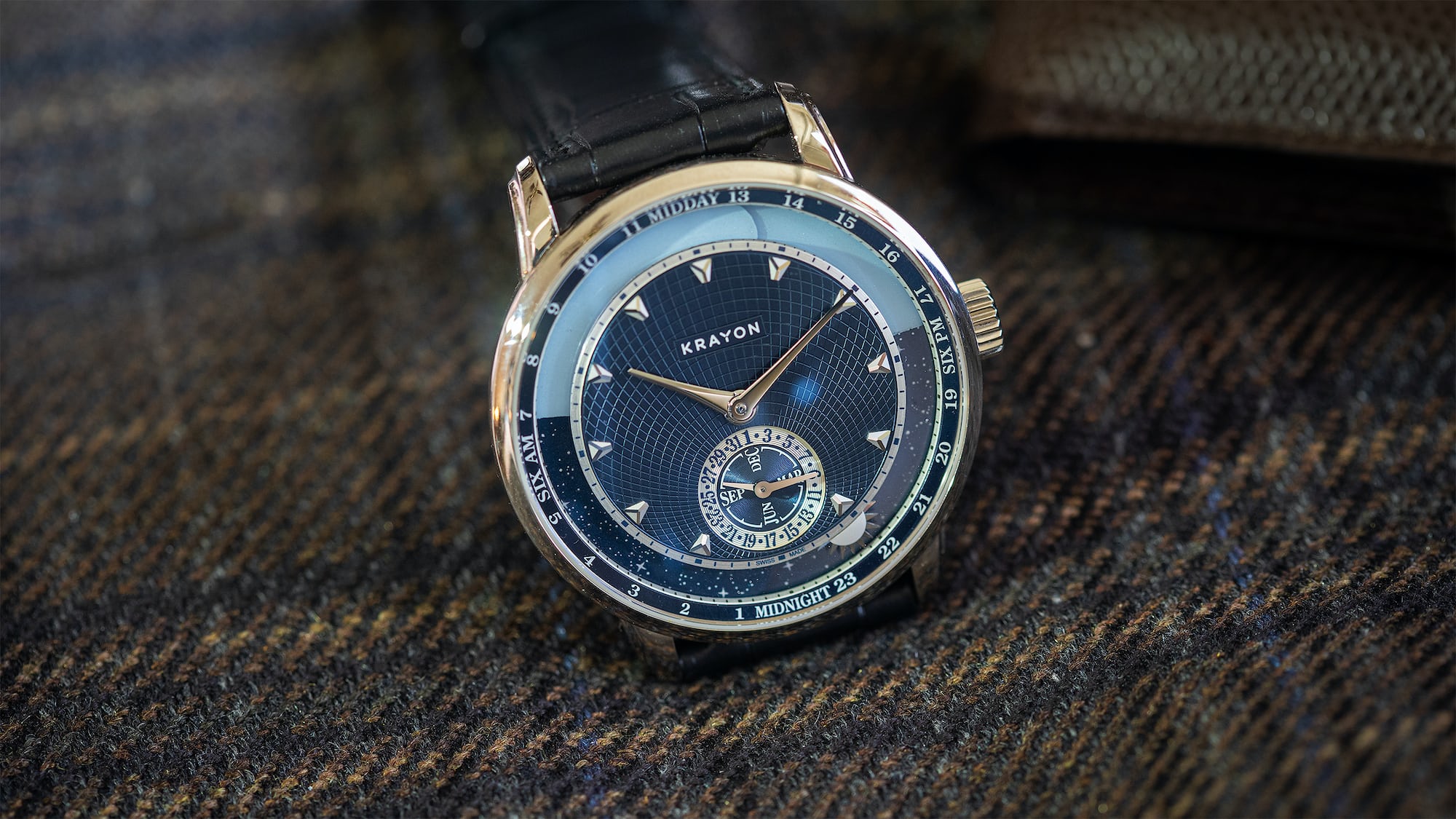 I’ve always found the sunrise-sunset complication to be one of the most intellectually beautiful complications in horology – there is something about having the rhythms of celestial objects reproduced in miniature on the wrist that is irresistible. Sunrise-sunset complications have been used in clocks for centuries and can be found in pocket watches as well – the Patek Philippe Graves Supercomplication is one example, and, more recently, Vacheron Constantin’s ref. 57260 is another (and it’s also, lest we forget, the most complicated watch ever made, albeit at 76mm x 31mm, it pushes the notion of portability to its limit). However, it did not appear in a wristwatch until the introduction of the Jules Audemars Equation Of Time in the year 2000. That watch was closely followed, the same year, by German watchmaker Martin Braun’s EOS wristwatch – both groundbreaking watches technically and aesthetically.

The only disadvantage to the complication and, probably, at least part of the reason it took so long to appear in a wristwatch is that it is highly location-dependent; it can only show sunrise-sunset times in a single location. The sunrise-sunset complication works in basically the same way as the Equation Of Time – there are two cams, one for the time of sunrise and one for sunset, which rotate once per year. The outer edges of the cams vary in radius, depending on where in the year you are, and a feeler lever riding along the edge of the cam translates this variation into the to-and-fro movement of the sunrise and sunset indications, as the day lengthens and shortens. The first watch (actually, I believe, the first mechanical timepiece of any kind) able to display sunrise-sunset times almost anywhere in the world, without having to change cams, was the Krayon Everywhere watch, with a mechanism designed by founder Rémi Maillat.

The Everywhere is a programmable sunrise-sunset watch. The user inputs the date, latitude and longitude of their location, and UTC (all of which can be done via the crown, remarkably enough), and the watch will show the times of sunset and sunrise, as well as the duration of day and night, for their location. It is an ingenious but also extremely complex timepiece (over 600 components), although Maillat’s design allows it to be remarkably flat, at just 11.7mm. It is also very expensive, unsurprisingly enough, at about $ 600,000 to start, depending on the number of customizations the potential owner desires. The Anywhere watch is based on the same fundamental idea but is less complex and correspondingly less expensive, and it still has much of the charm of the original Everywhere.

Reading off information from the dial, including the sunrise-sunset times, is simplicity itself. The relative position of the Sun above or below the horizon is shown by the solar disk, which rotates once around the perimeter of the dial per day. When it’s in the dark blue sector, it’s nighttime; when in the light blue sector, it’s daytime; when it moves across the boundary between the two, it’s dusk or dawn. The number of hours of daylight or night can be read off the 24-hour scale on the rehaut. The month and the date reside in a subdial at 6:00 and, as with the Everywhere watch, all indications can be set from the crown.

Like the Everywhere watch, the Anywhere is also surprisingly flat – the sunrise-sunset complication does not necessarily have to contribute significantly to thickness, but it’s still a pleasant surprise. At 39mm x 9.5mm, this is an eminently wearable watch that wears its complexity extremely lightly. Six-figure complicated watches can be rather more bombastic than not, a lot of the time, but the Anywhere watch is classic enough in its design and proportions to be a very viable daily driver.

The sunrise-sunset display consists of two moveable shutters which move back and forth in order to change the position of the horizon line as the year progresses. The position of the shutters is controlled by an adjustable cam which visually is the centerpiece of the wonderfully graceful movement.

The movement design is a sort of modified 3/4 plate. Above, you can see the mainspring barrel at the upper left and the rest of the going train – from the center of the movement and proceeding to the right, the center wheel, third and fourth wheels, and escape wheel – and balance; the escape wheel is under its own cock. The movement has a flat balance spring and freesprung, adjustable-mass balance. This part of the watch is entirely conventional in layout; however, all the components have been shifted into the upper half of the movement in order to allow room for the sunrise-sunset works.

The adjustable cam is flanked below, and to the sides, by the levers controlling the position of the shutters. The Everywhere watch used a system of planetary gears to control its sunrise-sunset complication, which function as a sort of mechanical analog computer – they take the input information and output the sunrise-sunset times. The cam system in the Anywhere watch is closer to the traditional system for this complication. However, the cam can be adjusted – albeit, it must be done by a watchmaker trained on the movement – to display sunrise-sunset times in any chosen location. Normally, in order to do this, an entirely new set of cams would have to be cut – if you bought a sunrise-sunset complication with cams for Singapore and you moved to New York, you’d need to order new cams and then send the watch back to the manufacturer to have them installed. The Anywhere watch appears to use a single screw set into the cam for this adjustment, and as long as the watchmaker knows how to use it, it looks as if the adjustment could be done at the bench in less than an hour and without having to send the watch home for surgery.

While the whole idea of the sunrise-sunset complication is enormously appealing to me, the fact that the cams for the complication are location-specific has always seemed a bit of a handicap. If, for instance, I wanted a Jules Audemars Equation Of Time, I would have to either find one that already has cams for New York, or buy one that does not and send it back to AP to have a new set of cams constructed. The Anywhere watch, and its more complex predecessor, represent an extremely sophisticated and very clever solution to this problem – one of the rare instances in modern horology of a genuinely major advance being made in a very traditional complication.