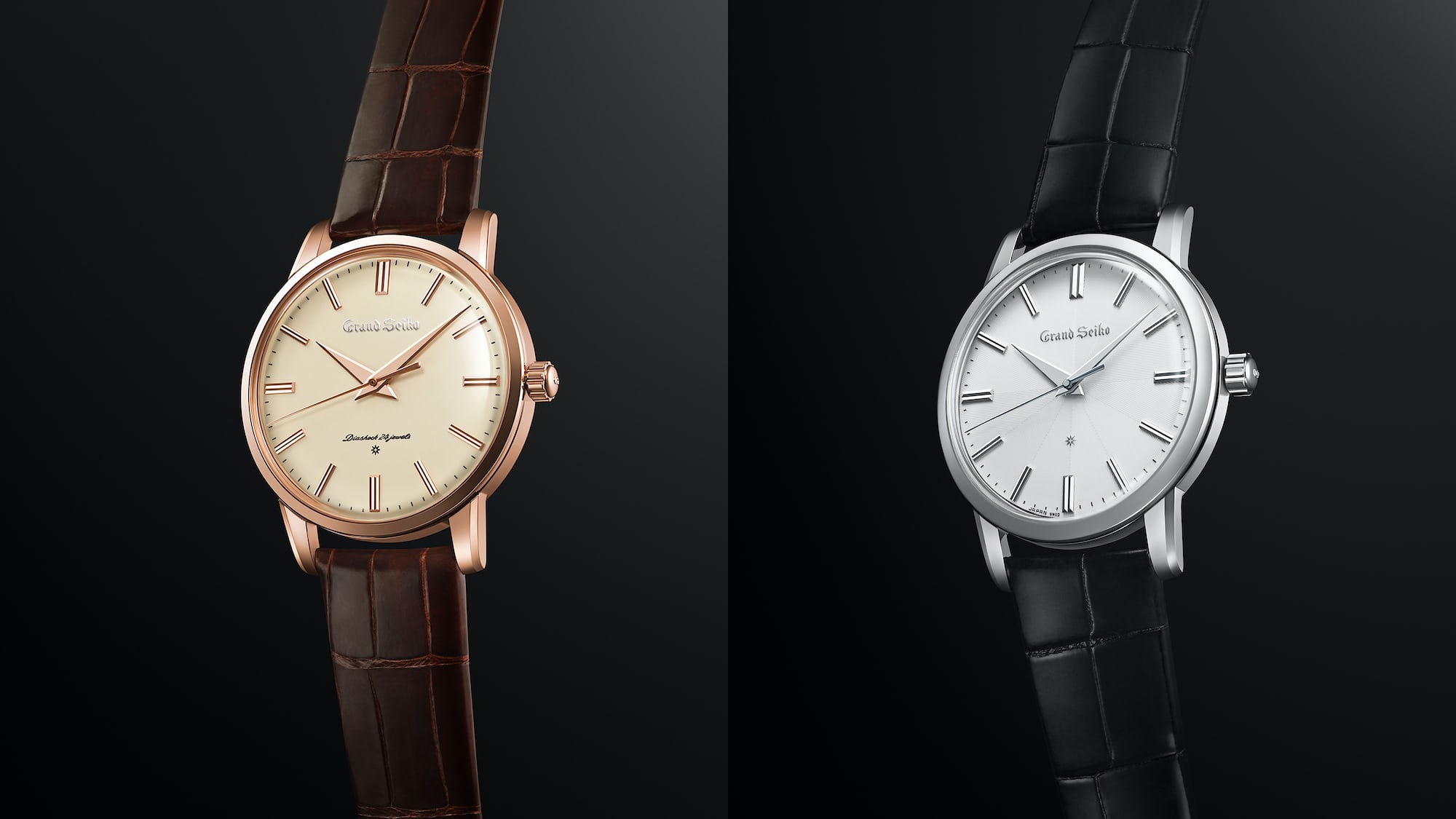 This year marks a number of important anniversaries for Seiko, as well as for Grand Seiko – it’s the 60th anniversary of the first Grand Seiko, of course, but it is also the 140th anniversary of the founding of Seiko itself. Just as significantly, it’s the 160th anniversary of the birth of Kintaro Hattori, the founder of Seiko. In honor of the occasion, Grand Seiko has released two very attractive new limited editions – the Spring Drive SBGZ005, in platinum, celebrating the anniversary of the birth of the founder, and the hand-wound SBGW260, celebrating the founding of Seiko itself. Both watches have cases based on the design of the first Grand Seiko from 1960, which housed the caliber 3180 (to collectors, the caliber has become synonymous with the watch) and was created by Suwa Seikosha, in Nagano, in a concerted effort to make as beautiful, durable, and accurate a watch as possible. Grand Seiko has released several editions based on “The First,” in 2011 (limited edition), again in 2017 (limited edition), and again in 2020 (regular production models).

The series from 2013 was, in terms of size, the most faithful to the original, at 35.8mm, but it also differed from it in key respects, including the use of a box sapphire crystal rather than the domed acrylic of the First, as well as a solid-gold case, rather than the 80-micron gold-plated case of the original. There were other subtle but definite differences as well, including slightly different lugs and a larger crown on the commemorative model. In 2017, the new limited editions SBGW251, SBGW252, and SBGW253 re-visited 1960 once again, but this time in three different case metals (steel, gold, and platinum) and a slightly larger, 38mm diameter. Finally, this year, we saw the introduction of SBGW259, SBGW258, and SBGW257 – all with hand-wound movements, and all with display backs. Case materials were slightly different for the full production series as well – yellow gold, platinum, and, for the first time, Seiko’s case-hardened Brilliant Hard Titanium.

The new limited editions introduce some further variations on the basic theme of the First, including the use, for the first time, of a Spring Drive movement in a First-based case and the use of a new version of the hand-wound caliber 9S64, with some very visible alterations and upgrades to the movement finish. The SBGZ005 will be produced in a boutique-only series of 50, at $ 103,000, and SBGW260 in a series of 350 watches, at $ 29,000 – also only available in Grand Seiko boutiques.

The Grand Seiko Kintaro Hattori 160th Anniversary Limited Edition SBGZ005 is, at first glance, a quite classic deployment of the First case – and at 37.5mm x 9.6mm, a very classically sized model as well (and thin, considering the 84-hour power reserve) only slightly larger than the original (and incrementally smaller than the 38mm 2017 limited edition models).

The case is Zaratsu-polished, with the silvery glow characteristic of highly polished platinum, and the hands and applied, diamond-polished markers are in 18k white gold. Normally, I’d have expected a heat-blued seconds hand, but in this instance, Grand Seiko has opted to keep the composition quite grey-on-white. While a contrasting seconds hand has become something of a Grand Seiko trademark – to see the blued seconds hand on the Snowflake do its thing is to feel in the presence of a uniquely serene kind of horological beauty – I think here, it would have the potential to be as much of a distraction as an asset.

Grand Seiko hasn’t said in its release material what exactly the process is for producing this particular dial, but the results are most interesting – a series of grooves set into what are sort of right triangles with rounded bases at the rehaut, and with very fine parallel grooves running parallel to the longer leg. These grooves are cut off at the longest side of the triangle – the hypotenuse, if we carry on with the right-triangle notion – producing the illusion of separate lines radiating from the center of the dial.

Unusual and striking dial treatments are a Grand Seiko hallmark; I don’t think I’ve ever seen anything quite like this before.

The Grand Seiko Kintaro Hattori 160th Anniversary Limited Edition SBGZ005 is also a first for a First – it’s the first time Grand Seiko has used a Spring Drive movement in a First/3180 case.

The movement is the hand-wound Spring Drive 9R02, which we saw for the first time in February of this year, in the Grand Seiko Elegance Collection Limited Edition For The 20th Anniversary Of Spring Drive. The movement is unusual in that, heretofore, hand-wound Spring Drive movements have largely been confined to the Credor line – most notably, of course, to the Eichi I and II watches, although Grand Seiko has also used a hand-wound 8-Day Spring Drive movement in the watch of the same name. The 9R02 is obviously a kissing cousin (at least) to the Eichi II caliber 7R14, and the two share a number of visible similarities, including the use of the signature Japanese bellflower (Platycodon grandiflorus, y’all) cover on the mainspring barrel, as well as the frog-gazing-at-the-moon jewels above the caliber number. The level of finish is comparable as well.

This watch is produced at the Micro-Artist Studio, in Nagano, and it’s a bit of a homecoming for the First case, which as we mentioned was produced at Suwa Seikosha in Nagano as well. This is the first time a First-inspired watch has been made there. There is a commemorative gold plaque on the movement bridge, which is engraved “Micro Artist,” but the prospective owner can ask for an alternative engraving.

The sibling to SBGZ005 is housed in a marginally larger case; SBGW260 is 38mm in diameter (I would say that I defy anyone to tell the difference with the two watches in hand, but I bet there are enthusiasts out there who could do it). While SBGZ005 uses a top-of-the-line hand-wound Spring Drive movement, SBGW260 uses the mechanical, hand-wound caliber 9S64.

Looking closely, you’ll notice that while SBGZ005 omits the “Diashock” and jewel count from the dial, SBGW260 retains it. I suppose Grand Seiko could have included the jewel count as well as some sort of anti-shock verbiage on the dial of SBGZ005 which, after all, has train wheels running in jewels and antishock systems on the last train wheel and on the glide wheel, but it would have felt a bit extraneous, if not out of place, in that watch. I don’t know that it would have played nice with the dial either.

The case and applied, diamond-polished indexes are in 18k gold, and the minute and seconds hands are both gently radiused, which contributes to the low-key blast-from-the-past vibe. The whole thing has a warm, coals-at-dusk-in-the-fireplace glow, and it makes a pretty good case for rose gold (to make a feeble joke – actually, come to think of it, this is the first time Grand Seiko has used rose gold in a First case; all the previous gold models have been in yellow gold). The Grand Seiko Lion is on the caseback, but for those who’ve not been fond of this detail in earlier models, it’s worth noting in this case that it is not a metalized application, but rather, etched directly into the sapphire – far more subtle, and in practice, it should be nearly invisible.

The hand-wound caliber 9S64 is one that we have encountered before; it was first deployed by Grand Seiko all the way back in 2011, where it was used for the first time in the SBGW040 First Grand Seiko LE, and the firm used it in the 2017 limited editions, as well as the 2020 full production models. The version of 9S64 used in SBGW260 has had some noticeable upgrades over those versions of the movement.

The standard version of 9S64 is a classic Grand Seiko design, both in terms of engineering and aesthetics. Designed to be sturdy and accurate, with a rigid 3/4 plate construction, it does not have the fine hand-finishing of higher-end Grand Seiko or Credor movements, but it is nonetheless extremely exactly executed, with razor-sharp transitions between the bridge surfaces and flanks, and a general atmosphere of precision machinery made to a very high standard. Even the verbiage on the plate seems intended to assure the owner of its technical bona fides. The version of 9S64 in SBGW260, on the other hand, is an obviously finer-looking take on this workhorse hand-wound caliber.

The major differences include the use of heat-blued screws over the plain polished screws in the standard version as well as the use of bevels at the edge of the 3/4 plate. The stripes in the standard version have been replaced with a linear graining (I’m told it’s called “hairline” finishing by the folks at Micro Artist Studio), and there is a gold plate affixed to the movement, carrying the Seiko “S” trademark. The finish seems intended to make an impression of a more specifically Japanese aesthetic, as well as to bring the watch more in line with the higher-end Grand Seiko and Eichi Spring Drive calibers – and to harmonize better with its SBGZ005 counterpart.

The Ongoing Evolution Of Grand Seiko

Both of these watches stand very much on their own merits as Grand Seiko timepieces – meticulously executed, with great attention to craft which borders on the obsessive (which is just the way we like it, if I’m honest). They are both likely to be criticized on a couple of points – chiefly, on the number of limited editions Grand Seiko is producing overall; on the increase in pricing at the higher end of the Grand Seiko spectrum; and on the use, once again, of the First/3180 case. These are, I think, taken in order, something which may be of concern only if it cannibalizes the evolution of the regular product catalog; something to watch but about which not to fret excessively; and lastly, a matter of personal tolerance – there are differentiating points, after all, between the 2011 LE, the 2017 LEs, and the 2020 regular production models.

In retrospect, I wonder how the LEs would have been accepted had the case design gone back into regular production first. However, it seems that variations on the basic theme of the First are here to stay, and for now, Grand Seiko seems to be taking care to introduce enough differences in case metal, size, dial treatment, and movement finishing and technology to keep at least some daylight in between them all.

In the five years that I’ve written about Grand Seiko for HODINKEE, I’ve seen them grow by leaps and bounds in both visibility and activities – to do so with all due speed but not seem to leave behind the values that made your audience love you to begin with is a pretty neat trick. I give Grand Seiko quite a lot of credit for sticking to their guns in keeping their level of craft also available at prices more familiar to long-term Grand Seiko fans. There are still any number of really beautiful Grand Seiko watches available for under $ 6,000 – some well under – and as long as that’s true, celebrations like this one still feel like something in which we can all join.

Find out more at Grand Seiko USA. For a look at whether or not Spring Drive can be considered to have an escapement, check out our technical review from this October, right here.