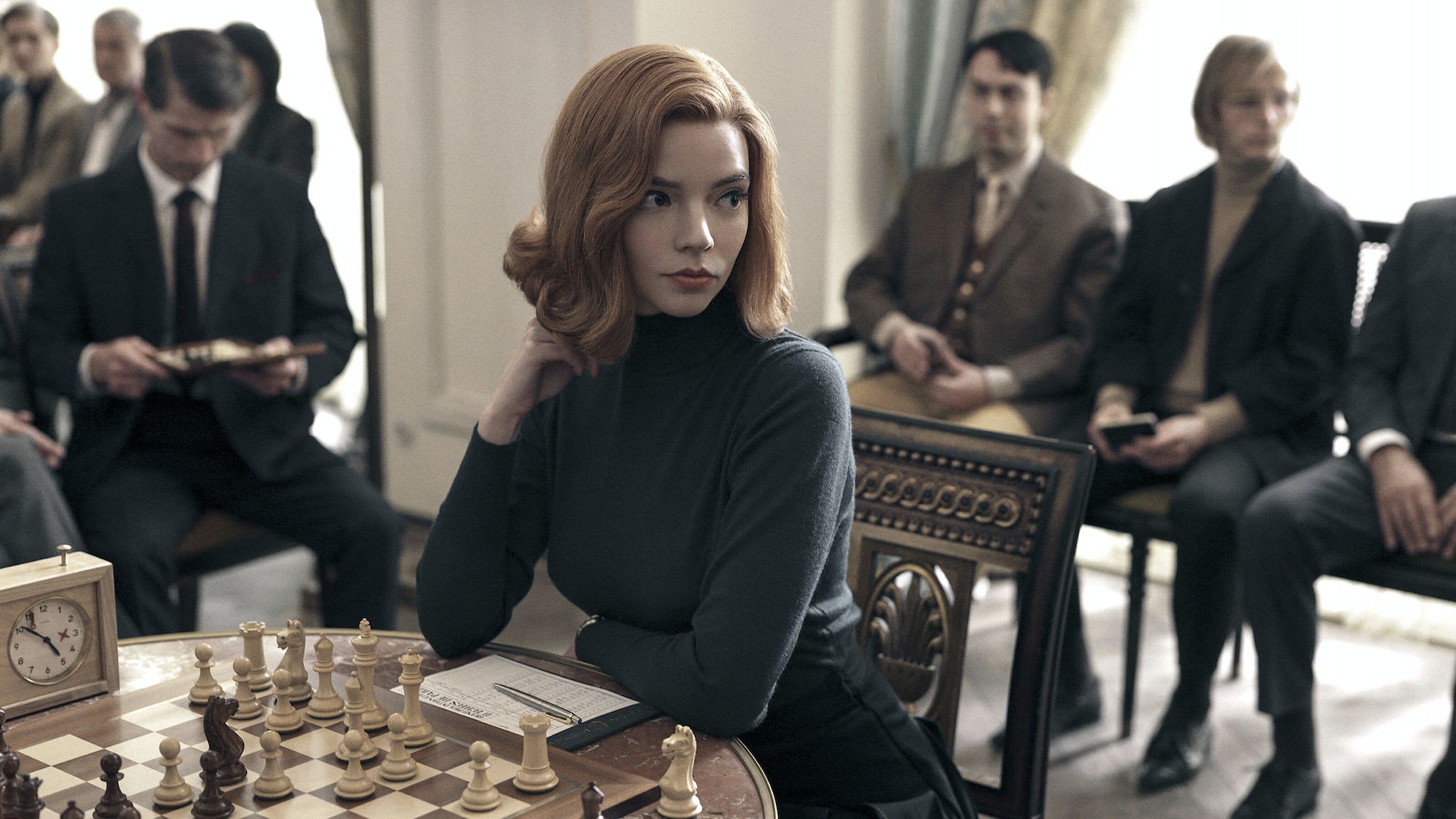 The Netflix series The Queen’s Gambit is a very unusual kind of show about a very unusual kind of person – you wouldn’t think chess, or a championship player, would make for gripping TV, but it’s become an unlikely hit. The player is a woman named Elizabeth Harmon (played by Anya Taylor-Joy) who, orphaned at eight years old in a car accident that kills her mother, finds herself sequestered in a Kentucky orphanage right out of Dickens (well, maybe Dickens by way of Faulkner). There’s more than a hint in the first episode of the chaos in Beth’s life before the orphanage, and though it’s presented with a deft touch, the sheer inexplicability of life’s unpredictable violence casts a very long shadow into Beth’s future as a merciless grandmaster of the game.

Chess is an ancient game, and anyone who plays it can to some degree understand the game’s ability to pleasantly absorb the mind – or to dominate it. Many mathematicians, scientists, and philosophers have found there’s a very particular kind of abstract beauty in the game, but chess has another, darker side. Albert Einstein once said, “Chess holds its master in its own bonds, shackling the mind and brain so that the inner freedom of the very strongest must suffer.” For Beth, chess, it seems, is a refuge and a way to experience order when disorder seems ubiquitous, but Einstein’s shackling afflicts her as well.

In game-theoretical terms, it is a game of “perfect knowledge” – nothing is hidden from either player. Chess is a very classical game in this regard – chance plays no part in it. Like the classical laws of physics themselves, it is completely deterministic, and the complex mathematical structure of the game (there are around 10⁴³ possible legal positions) means that even winning implies, in a depressing way, that you’re not so much smart, as just less dumb than the opponent. And all this is done while, quite literally, the clock is ticking.

Other than the basic rules of the game, the most important element in chess is time. Every tournament game plays out under strict time controls, though this wasn’t always the case – a major part of chess strategy, pre-clocks, was simply trying to wear out your opponent. Championship games in excess of eight hours weren’t unusual; a match in 1843 between Howard Staunton and Pierre St. Amant took more than 14 hours.

The rather absurd lengths of time it could take to complete a tournament made it clear that implementing some sort of time control would both improve the experience for spectators, as well as make for sharper play. In 1852, an anonymous writer using the pseudonym A. Cantab (“Cantab” means a student or graduate of Cambridge) proposed, in The Chess Player’s Chronicle, “Let each player have a three-hour sand glass at his elbow and a friend on either side to turn it. While the player is thinking, the sand must be allowed to run; while his opponent is thinking, his glass will be laid horizontally on the table and the running suspended.” This was an improvement over no time control at all, but it was still not ideal as the rate at which sand flows can change depending on the weather. The system was also vulnerable to player error – putting the wrong end of the hourglass upright when taking one’s turn, for instance; you can imagine a desperate player doing it on purpose and hoping to get away with it.

The first actual clockwork chess clock seems to be something called a “tumbling” chess clock, in which two pendulum clocks sit on opposite ends of a beam with a pivot in the middle – like a seesaw. Pressing your side down as you start your turn would block the pendulum in the opponent’s clock, stopping it, while at the same time starting your own clock. The device was invented in 1883 and used in a tournament later that year, and it was the first chess clock whose use resulted in a forfeit due to running over time.

The chess clock continued to evolve, and in 1900, it reached what we now recognize as the classic form of the chess clock and the type used in The Queen’s Gambit: two dials, with a button for each player which, when pressed, stops their clock and starts their opponent’s. Breitling is justly remembered among watch enthusiasts for Willy Breitling’s 1934 patent for the first modern two-button chronograph; in the annals of chess timing, a maker named Veenhoff, in Groningen, Holland, produced the first modern two-button chess clock. In 1906, Scientific American described the invention:

“A small clock designed especially for chess players has been designed by Herr Veenhoff of Groningen. This apparatus is composed of two similar small clocks, mounted side by side on a wooden platform. Behind the clocks a mechanism is installed, designed to be set in action and to stop according to the movements of the players. It consists of a long double lever, pivoting at the middle on a support fixed to the platform and is furnished with a button at each of its extremities. … When pressure is applied on one of the buttons of the lever, the corresponding balance is disengaged, while the other continues locked until the other extremity of the lever is depressed.”

Heuer’s Chess Master was an example of a very high quality, classic post-World War II mechanical chess clock. The clocks were Heuer branded, but made by a company called Looping which went bankrupt in 1980, and Heuer was the sole importer of Looping clocks from 1968 to 1975 (early models had plastic buttons which had a tendency to fly off if the opposite button got smacked too hard; this was fixed by using metal buttons in later models). Certainly, they were far from the only maker of chess clocks – considering that they were necessary for any tournament play, chess clocks must have been made by the tens of thousands at least.

Chess as metaphor: The clocks have appeared in the movies as well, sometimes as part of a broad hint that a chess expert is a criminal mastermind to whom people are merely pawns in a master plan. Spectre Chief Planning Officer Kronsteen debuts at the beginning of From Russia With Love, to the background sound of an ominously ticking BHB chess clock. Nowadays, however, analog mechanical chess clocks have largely given way to digital quartz chess clocks, which are much more versatile and useful. The basic time control for tournament play in modern chess, via the international regulating entity for the game (the Fédération Internationale des Échecs – headquartered in Lausanne, Switzerland; who’s surprised?) is 40 moves in 90 minutes, with an additional 30 minutes for the rest of the game; however, a supplement of 30 seconds is added per move. That sort of thing is very tricky in a mechanical clock, but child’s play for a multifunction quartz clock.

The star power of the show has made chess itself a star again – and according to the New York Times, sales of chess clocks have gone through the roof. The Times reports, “A spokeswoman for eBay, Kara Gibson, said the company had recorded a 215 percent increase in sales of chess sets and accessories since the debut of the show in October … Vintage set sales have increased seven times, as have sales for equipment, including chess clocks and timers, which are up 45 times since last month.”

What digital chess clocks don’t have, of course, are the sounds of the original mechanical chess clocks. These sounds are part of the aural environment of The Queen’s Gambit, and their debut marks Beth’s graduating from promising beginner to prodigy, to terror of the tournament circuit.

Time is death in chess (at least for the loser), but for Beth, it’s also the sound of control. Although the line hits the symbolism a little hard, a remark she makes in a magazine interview is telling: “It’s an entire world in sixty-four squares … it’s predictable … and if I get hurt, I have only myself to blame.” The music of the tournament is the music of chess pieces snapping into place on the board, of ticking clocks and the quiet click of timing buttons being pushed, with all the finality of a hammer nailing a coffin shut.