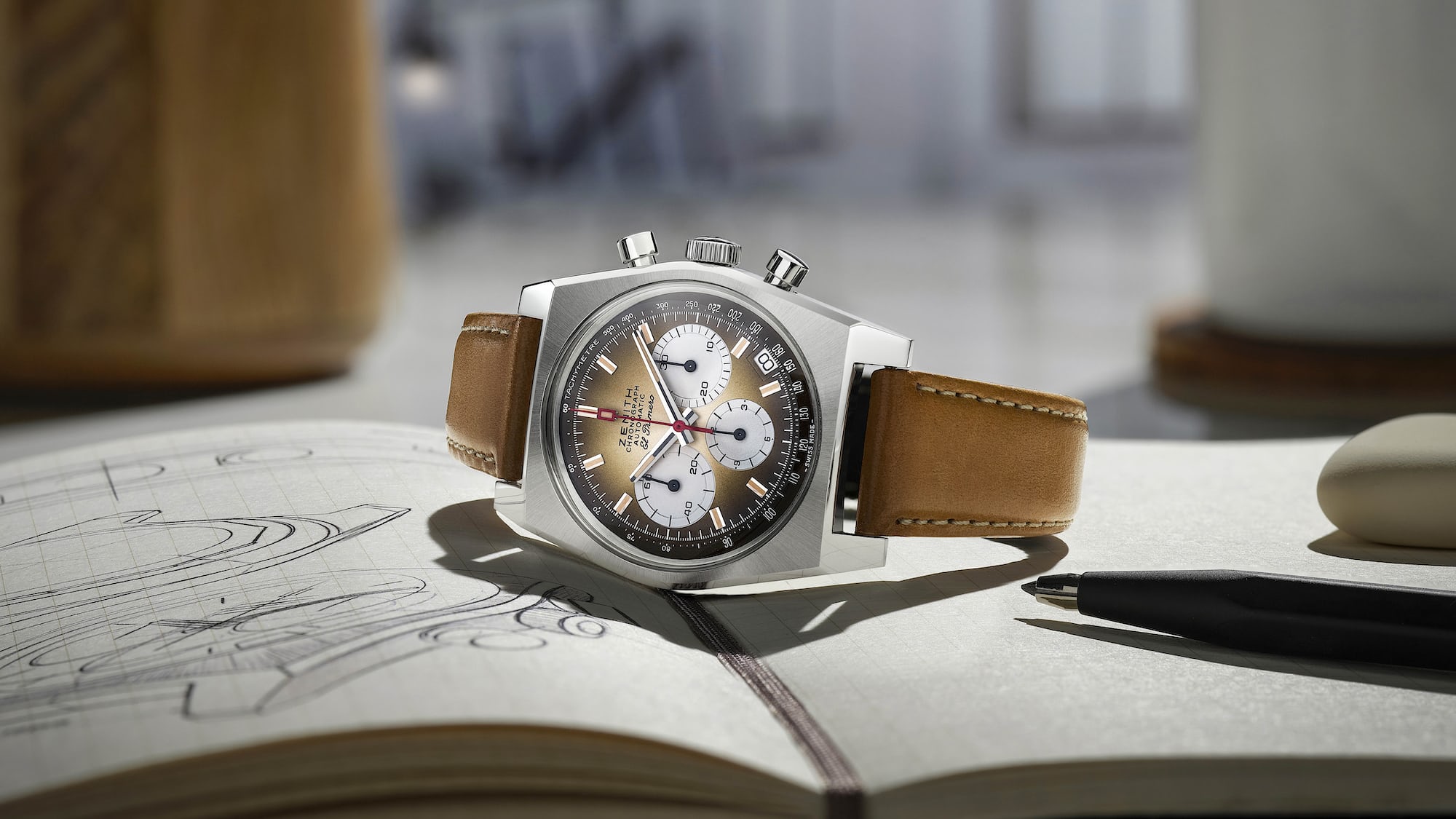 Today, we’ve got something new for you. But I’ll bet it looks familiar. It’s the Zenith A385 Revival, a watch that follows in a steady stream of models paying homage to the first generation of Zenith El Primeros.

These revival pieces are nearly identical to the watches that Zenith used to launch its iconic movement, a caliber that remains, 52 years later, its most famous asset. But if looking at these Revival watches has reinforced anything in my mind, it’s that even if Zenith is best known for one very special automatic chronograph movement, the company was doing some really fantastic watch design when El Primero launched.

With the A385, we have the same angular tonneau case shape as the A384 Revival, which you may remember from 2019. Where the A385 takes a turn is with its smoked out dial – the A384 has a more sober silver one with black sub-dials. Fumé dials like this one would go on to gain lots of traction in the Swiss watch industry and become a calling card of watches in the 1970s.

The new Chronomaster A385 Revival also marks the return of a beautiful ladder bracelet that we saw on the A384 Revival of two years ago. “Ladder,” because of the gaps between the bracelet’s central links. The original ladder bracelets of ’69 were of course made by Gay Frères for Zenith, and have gone on, as with so much that the famed bracelet supplier did from this period, to have a cult following. If the bracelet isn’t a must for you, you can save a bit of dough and instead buy the A385 Revival on a swell calfskin strap. It’s nice and all, but if you’re buying this watch, why not get the killer bracelet?

Over the past two years, Zenith has revived the watches associated with its 1969 launch of the El Primero. Lest we forget, when the El Primero originally dropped, it came in a couple of case shapes – a conventional round one in the form of the famous A386 and an angular tonneau like what you see here – as well as with a handful of dial designs. More options followed, including a hulking “TV-style” square and the A781, A782 and A783, which to me are the ultimate 1970s El Primeros. They came on massive “lobster-style” bracelets.

But it’s the angular tonneau of the original A384 and A385 that prefigured the Defy and the decade to come. The A385 also had the aforementioned smoke-out dial that would typify 1970s watchmaking in Switzerland. To my mind, the original A385 was a late-’60s watch with its eyes trained on the next decade. Another 1969 development, Seiko’s quartz Astron, set in motion a series of events that would make the 1970s an incredibly difficult decade for Swiss mechanical watchmaking, but from a design standpoint, there was a lot of cool stuff going on.

The A385 Revival is a period piece that transports me back to a time in watchmaking before I was born, but that must have been incredible to witness. The El Primero was one of three automatic chronographs launched in 1969 along with the cal. 11 and Seiko’s 6139, though the only of them to have an integrated chronograph mechanism and a high-beat rate of 36,000 vph. It’s also the only one you can still purchase new today, and with this new Revival, in a watch pretty much as it was originally conceived.

That’s right. The watch we have here is substantively the same as the one that it honors. Sure, the movement has some technical enhancements, and there is an open caseback and a sapphire crystal, as well as modern non-radioactive lume. But squint and you’ll see a late-’60s original looking right back at you.

LVMH Watch Week is an annual launch event for the LVMH watch brands. Some of last year’s coverage on HODINKEE can be found here and here. Although LVMH Luxury Ventures recently became a minority investor in HODINKEE, we maintain complete editorial independence.