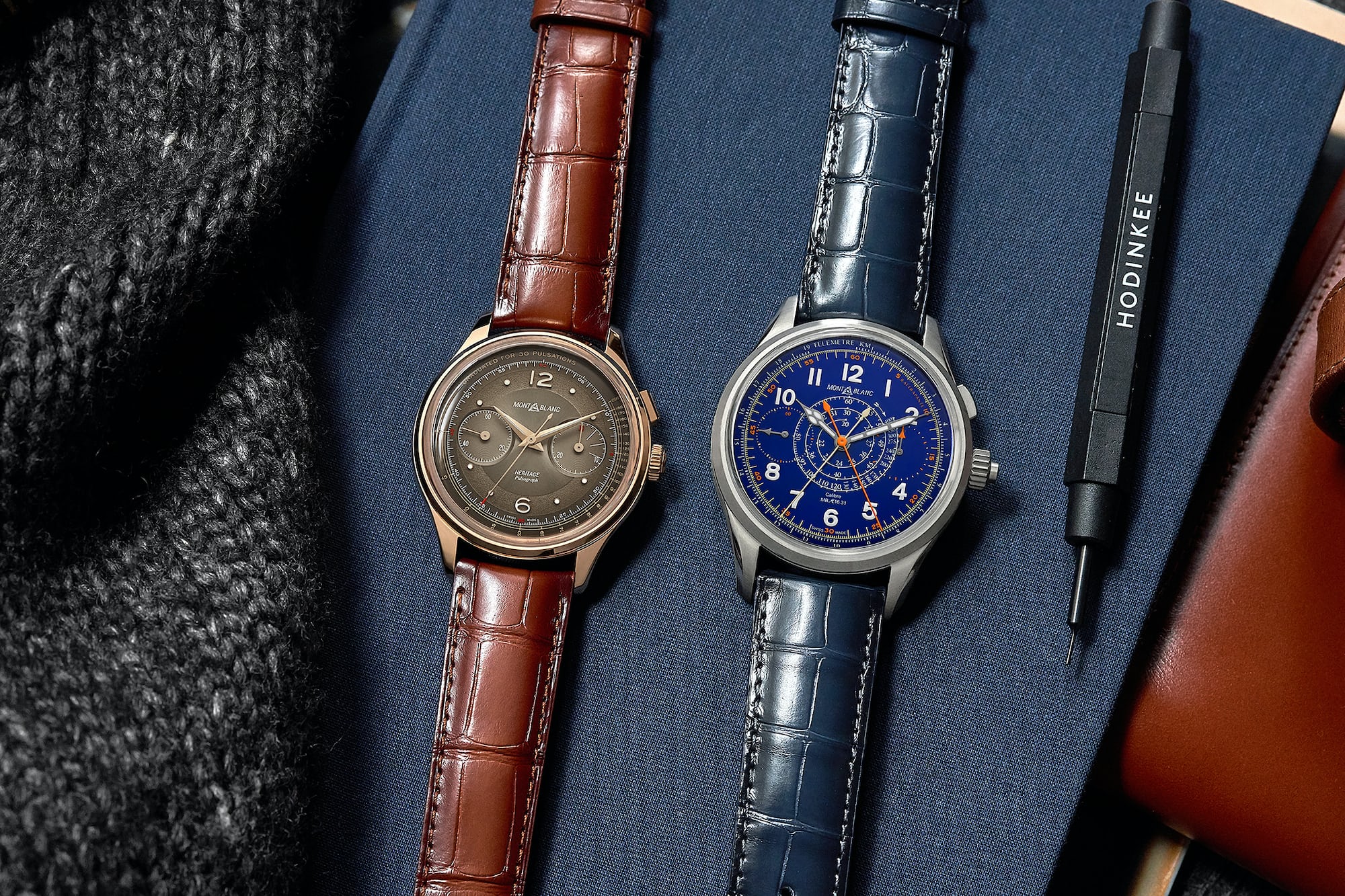 It’s been far too long since we last updated the HODINKEE Shop with the latest from Montblanc. That’s why today, we’re excited to share with you four new watches that highlight the company’s diverse approach to watchmaking. There aren’t many brands that can successfully produce accessible, entry-level timepieces alongside complicated chronographs that compete with the best of Swiss watchmaking (inside the same collections, no less!), but Montblanc – with its stewardship of the historic Minerva manufacture – is able to balance both sides of the collecting equation with ease.

The four new watches we’re introducing today illustrate exactly how this inner tension brings out the best in Montblanc’s watchmaking division. You’ll find two of today’s watches come from the brand’s sporty 1858 series, while the other duo is from the sophisticated and stylish Heritage collection. One watch from each pair is a limited release featuring a superlative, hand-finished chronograph caliber from Minerva inside, while the remaining two watches are series-produced editions with Sellita-based movements that offer a similar vintage-inspired aesthetic but in a more approachable package. All four watches, however, benefit from the close attention to detail and design-driven approach that Montblanc has staked its name on over the past two decades. You can head over to the HODINKEE Shop to discover our entire selection of Montblanc watches right here or read on to learn more about today’s additions.

This is actually the first-ever contemporary split-seconds chronograph we’ve had the opportunity to offer in the HODINKEE Shop, and, wow, is it ever a beauty. Executed with a rich blue enamel dial made of solid gold inside a grade-5 titanium case, the Montblanc 1858 Split Second Chronograph Limited Edition was released last year in a limited edition run of just 100 pieces. This is a true collector’s watch in every sense of the word, and we’ve secured one of the last examples available to offer to HODINKEE Shop customers.

The 1858 series takes its name from the year the Minerva manufacture was founded in Villeret (as the H&C Robert Company) by watchmaker Charles-Yvan Robert and his brother. It has become a flagship of the greater Montblanc watch collection since its official debut in 2018, with headlining pieces like the globe-trotting Geosphere. Chronographs being a historic specialty of Minerva, the movement inside the 1858 Split Second Chronograph is the manually wound MB M16.31 caliber, which is based on the 17.29 pocket watch movement developed in the 1930s by the Villeret watchmakers.

Also known as a rattrapante or doppelchronograph, split-seconds chronographs are considered one of the most difficult complications to master, which is why only a select few Swiss brands produce them today – and when they do, they’re typically priced in the six-figure range. This special kind of chronograph gives the wearer the option of tracking two separate instances of elapsed time that are occurring simultaneously (aka, split-time). The most commonly cited real-life benefit, for instance, is timing laps during a race. A split-seconds chronograph achieves this through two central seconds hands that are paired together; they start at the same time, but the seconds hand placed on top of the two can be stopped at will to track the exact split time. On the Montblanc 1858 Split Second Chronograph, the seconds hands are colored in beige for the primary chronograph seconds hand, and red for the split-seconds hand. Start, stop, and reset for both hands are controlled by the single pusher set in the three o’clock crown, while the pusher at two o’clock on the case controls the split timing function.

Minerva’s contemporary watchmakers built on the original 17.29 platform to add a rattrapante complication, through the addition of a secondary column wheel and hammer, as well as auxiliary levels and clamps. If you’re at all familiar with Minerva movements, you’ll immediately recognize the traditional V-shaped bridge (an element so characteristic of Minerva timepieces it was patented in 1912), the signature arrowhead tip of the chronograph brake lever, and an extra-large balance wheel that ticks leisurely at 2.5 Hz; the overcoil hairspring is also produced in-house by Minerva in Villeret. The movement is notable for its large size (it was originally a pocket watch caliber, after all), which provides extra room to explore the intricate architecture and hand-finished decoration (which includes côtes de Genève, extensive perlage, and polished bevels in nearly every visible direction) with a loupe.

The plus-sized movement results in a substantial 44mm × 14.55mm case profile. However, the prominent dimensions are balanced by the use of grade-5 titanium for the case metal, which allows for lightweight wearability. Visually, the watch is finished through a solid-gold dial that’s coated in grand feu enamel to achieve an electric shade of blue with contrasting orange elements on the sub-dials and seconds track. An eye-catching “snail” three-minute tachymeter scale and outer telemeter scale complete the complicated look.

Oh, and if the overall aesthetic of the 1858 Split Second Chronograph Limited Edition looks familiar to you, it’s for good reason. Montblanc offered a split-seconds chronograph featuring a similar execution – with a blue Agate stone dial instead of vitreous enamel – at the 2019 edition of the Only Watch auction for charity, where it sold for over $ 100,000. The Montblanc 1858 Split Second Chronograph Limited Edition in titanium with blue enamel dial, on the other hand, is priced at $ 39,000. Limited to 100 pieces, it’s available now in the HODINKEE Shop.

If your heart’s still aflutter from the Montblanc 1858 Split Seconds Chronograph, but you want something that’s a touch simpler yet just as limited and refined, this is the watch for you. The Montblanc Heritage Manufacture Pulsograph Limited Edition trades in the dueling dance of the rattrapante for a simplified monopusher design with two sub-dials and a pulsograph scale on the periphery of the dial. A pulsograph is a logarithmic scale that allows one to measure heart rate in addition to tracking elapsed time. This old-school complication was once frequently found on “doctor’s watches,” and it now reflects the purpose-built history of Minerva chronographs, from the 19th century to today. Cased in 18k rose gold and limited to 100 pieces, the Montblanc Heritage Manufacture Pulsograph breathes new life into a classic chronograph design.

Coming to us once again from the Minerva facility in Villeret, the MB 13.21 inside the new Pulsograph boasts historic horological provenance. It’s based on the original caliber 13.20 from 1924, which is considered to be one of the earliest chronograph movements intended strictly for use in wristwatches. The caliber 13.20 is noted for how advanced the movement architecture and construction were during its original time of production, and you can even find it occasionally popping up in the HODINKEE Shop’s weekly vintage watch listings. In the Heritage Manufacture Pulsograph, this manually wound lateral-clutch column-wheel chronograph is as brilliant as ever, plated here in rose gold to match the case metal and hand finished with all the precision you’d expect out of Minerva’s watchmakers. (The same MB 13.21 caliber can be found in our 2019 collaboration with Montblanc, the 1858 Monopusher Limited Edition for HODINKEE.)

It’s not just the movement inside that’s worth paying attention to here. Montblanc has, in recent years, gained a reputation for producing incredibly intricate and enticing dials inside the Heritage collection, and the Pulsograph Limited Edition is no slouch in the department. We have four different finishes here, all laid out in a tiered approach that separates the sunburst central portion apart from the concentric snailed sub-dials, the grained hour track with applied numerals and markers, and the matte finish on the outer graduated scale. Dauphine hands fitted with a sliver of white Super-LumiNova and dots of bright red at the poles on the seconds track and tip of the central seconds hand give the entire presentation an eye-catching finishing touch. Of course, being a monopusher, the chronograph functionality is controlled via the rectangular pusher at two o’clock on the case.

Limited to 100 pieces, the Montblanc Heritage Pulsograph is available now for $ 33,000 in the HODINKEE Shop.

A New Montblanc Heritage Automatic In Green And Gold

One overlooked detail about Montblanc’s Heritage collection is that the elegant designs typically transcend any specific era of inspiration. Montblanc only started producing wristwatches a little over 20 years ago in 1997, so it has no specific mid-century period of production from which to glean inspiration. What Montblanc does benefit from, however, is its relationship with Minerva, who was in fact crafting wristwatches of all types through the 20th century. This is where the contemporary Montblanc Heritage collection succeeds: It uses mid-century Minerva wristwatches as a tent-pole, around which a consistent design language is then fine-tuned for modern wear. You could consider it a palate cleanser to the all-encompassing industry trend of direct re-editions and vintage resurrections; for example, you won’t find any darkened lume plots or forced patina here.

One of the most recent Montblanc Heritage pieces to catch our collective eye is this stunner of a dress watch in green and gold. Unlike the previous two chronographs, this is a simple, classic three-hander powered by a sourced Sellita movement. It shares a similar design language to the other Heritage Automatic pieces currently offered in the HODINKEE Shop (in steel, with either a salmon dial or white dial), but it brings in a whole new level of indulgent appeal with a polished 18k yellow-gold case.

Priced at $ 8,900, the latest Heritage Automatic offers an excellent entry point into the prestige world of precious metal watchmaking, in a good-looking, no-date execution that you won’t come across every day. You can take a closer look at the Montblanc Heritage Automatic right now in the HODINKEE Shop.

We see a lot of chronographs released every year, and it’s rare that any single one takes us by surprise. The new Montblanc 1858 Monopusher, however, does just that for its casual, vintage-inspired design and its compelling presentation of a typically high-priced chronograph arrangement. What might be a straightforward, pump-pusher chronograph in the hands of a less thoughtful brand, Montblanc has elevated the 1858 Monopusher Chronograph to true value-proposition status through the use of a smart, no-date design and single-button mechanics, all for $ 5,500 on a beads-of-rice bracelet.

Even if you dismiss the inside-baseball cool factor of a monopusher chronograph (which comes courtesy of a cam-operated Sellita caliber), the latest addition to the 1858 collection is unambiguously attractive. The black dial almost reads as brown on the wrist, no doubt thanks to the prominent use of beige hues on the Arabic numerals, cathedral handset, sub-dial numerals, seconds track, and telemeter scale. The overall appearance gives off a look and feel that’s the equivalent of your favorite well-worn pair of jeans, yet the multi-finish case – highlighted by its polished sloping bezel – and beads-of-rice bracelet mean there’ll be no mistaking the 1858 Monopusher Chronograph for a vintage watch.

Shop The Latest Montblanc Watches In The HODINKEE Shop

Montblanc’s guiding principle in recent years has been to let the quality of its watches speak for itself. The company’s limited-production offerings that call on Minerva-built movements do an excellent job of exactly that. Still, when you take a closer look at Montblanc’s entire collection, you can see how each watch builds on one another, bringing together an aesthetically unified selection of watches that each offer excellent detail and value to collectors, regardless of the final price point. You can explore our entire assortment of Montblanc watches in the HODINKEE Shop right here.