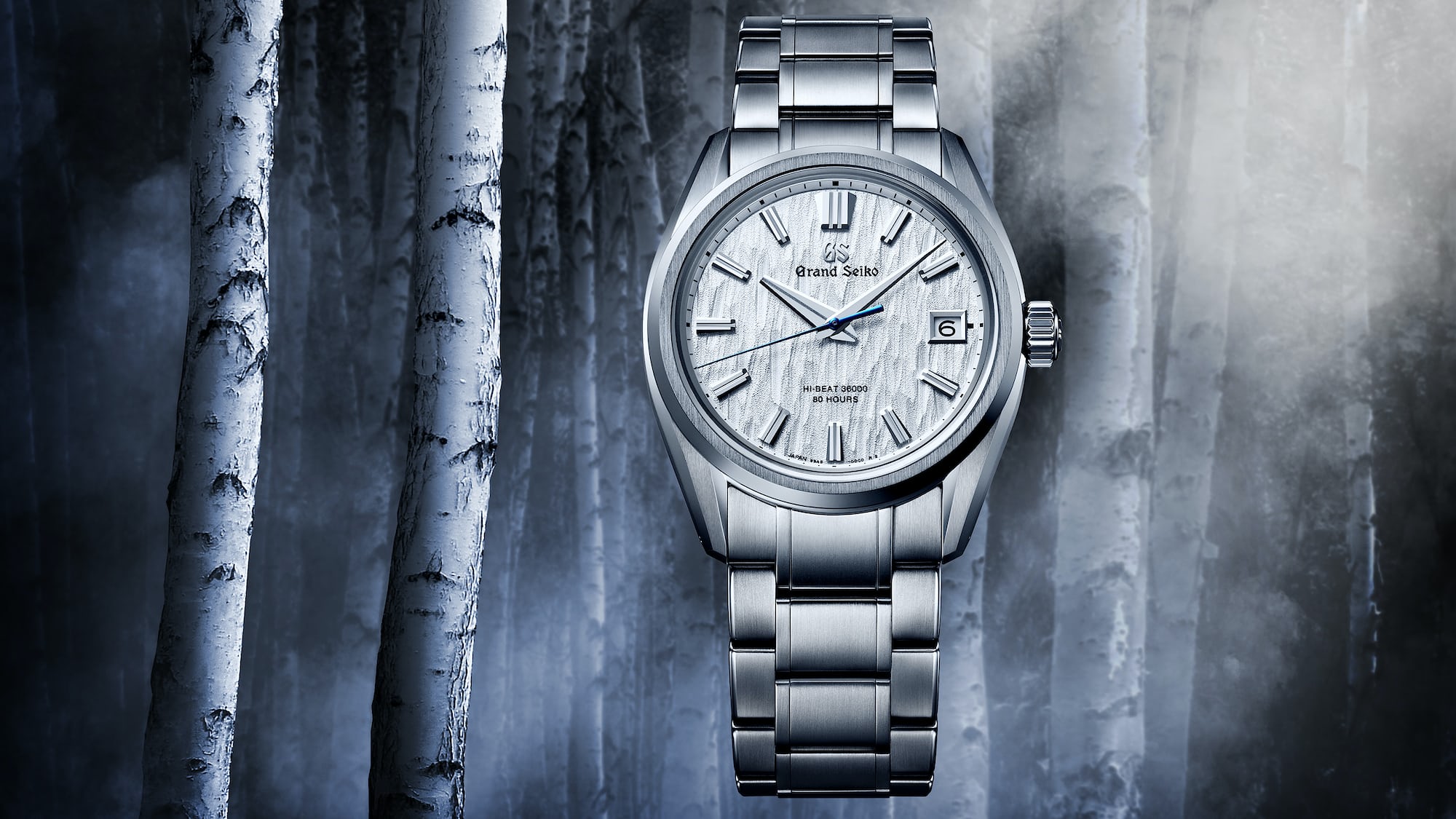 One of the biggest pieces of news from Grand Seiko in 2020 was an introduction not just of a new watch, nor even a new movement, but a new escapement – something which happens in watchmaking seldom enough that you can count the occurrences per century on the fingers of one hand. The new escapement, which Grand Seiko simply calls the Dual Impulse Escapement, first debuted in a limited edition 60th Anniversary model, in gold, priced at $ 43,000, but it seemed obvious that the new caliber would find its way into other watches in the Hi-Beat collection eventually. Grand Seiko’s now rolling out the movement in a new Hi-Beat watch: the SLGH005 “White Birch,” in steel, with a birch-bark pattern dial and a 44GS-style case. This is a regular production model, not a limited edition, priced at $ 9,100.

Right away, this is a watch that gives me a little bit of frustration, because the dial pattern, and how it plays with the other elements of the dial and design overall, really screams, “meet me in person.” While the press images from Grand Seiko are tantalizing, as with its cousin, the Snowflake, it’s a watch that needs to be seen to be appreciated fully (more than is usually the case). The indexes are quite elaborate, even by Grand Seiko standards. They are the same configuration as in the 60th Anniversary LE, and the hands likewise are the same design. The minute hand and seconds hand are classic Grand Seiko, with knife-sharp edges on the minute hand and heat-blued steel for the seconds hand. The longitudinal indentation on the hour hand both harmonizes with the corresponding indentations on the indexes and acts as an additional visual aid in legible read-off of the time.

The dial is rather irresistibly reminiscent of the Snowflake, sure, but the texture is unlike the Snowflake’s in its distinctly bark-like articulation. This is actually one of the more literal interpretations of natural inspiration that I think we’ve seen from Grand Seiko – although it’s still sufficiently abstracted that if GS hadn’t dubbed this one “White Birch” right out of the gate, you wouldn’t necessarily have made that specific an association on your own.

The signature Grand Seiko “Zaratsu” polishing is as seductive as ever. The 44GS case lends itself to a lot of different interpretations in different metals – I think it’s pretty sweet in yellow gold, where the crisp edges and alternating brushed and polished surfaces give it an ingot-like quality. But in a way, it feels as if the natural home of Zaratsu polishing is steel, in the same way that watches like the Royal Oak, Nautilus, and others (the Vacheron Overseas, the Girard Perregaux Laureato) seem most themselves in steel. One element of the 44GS case I always appreciate is the use of drilled lugs – making it easy to change the bracelet for a strap and vice versa is a great bit of added value for a luxury watch and one I wish other makers would emulate more often. Sure, it’s a bit of a pragmatic, maybe even proletariat, touch in a luxury watch, but the intersection of Luxury and Practical has always been kind of the home address for Grand Seiko.

The standard Grand Seiko Hi-Beat movement is the caliber 9S85. As always, The Naked Watchmaker’s 9S85 tear-down is the best visual primer on the movement out there, and his impression of the movement is an expert’s, and worth quoting verbatim:

“The overall construction of both the movement and the case is congruent with the goal of a strong and precise timekeeper designed for longevity. A solid stainless steel, two-piece case with one of the strongest case tubes ever machined. The fully jewelled calibre has all wheels pivoting in rubies. The resulting calibre combines vintage solidity in construction with modern manufacturing techniques and alloys effectively.”

That said, the new Hi-Beat caliber 9SA5 is clearly being positioned as a step up, both in engineering and in finish. In addition to the new escapement, which should offer better efficiency than a standard lever, the 9SA5 is thinner; the 9S85 is 28.4mm x 5.99mm versus 31.0mm x 5.18mm for the 9SA5. and with an 80-hour power reserve as well, vs. 55 hours for the 9S85. The movement finishing is also a step up – while the 9S85 exhibits the classic, flawless precision machining characteristic of all Grand Seiko movements, the 9SA5 has more visibly highly polished countersinks.

The 9S85 has sharp-edged transitions from the surfaces of the bridges and plates to the highly polished vertical flanks, but the 9SA5 has actual anglage, as well as a skeletonized rotor which lets you see more of the movement than the standard 9S85 rotor. Other upgrades include a free-sprung, adjustable-mass balance, an overcoil balance spring, a balance bridge for better fine adjustment and shock resistance, and a going train reconfigured from the version in the 9S85, which allows for a flatter construction and has a lot to do with the 15% reduction in height.

The Birch Bark SLGH005 (I like that the name is official, although I don’t know if that’ll blunt the nearly irresistible urge GS fans have to give models their own nicknames) seems to represent something more widely relevant to Grand Seiko enthusiasts than the obviously breathtaking but extremely expensive limited editions which have been enjoying a lot of the limelight this year.

It sits somewhat above the 9S85 and GMT-equipped 9S86 watches, which start at just under $ 6,000 ($ 5,800 for SBGH201). However, for the extra money, you get the first regular production model with the new caliber, with which you get more elaborate finishing, flatter construction, a significantly longer power reserve, and a movement design rationalized to compete with other current production sports watch movements such as the Chronergy escapement calibers from Rolex and the Co-Axial models from Omega.

I can quibble a little over the price, but as with the SBGZ005 I just wrote up, the cost is somewhat high relative to the competition, but certainly not unreasonable. Moreover, the Birch Bark offers extraordinary execution in the visible elements of the watch as well. I continue to wish for a micro-adjustable bracelet, although I would not be surprised if one is in the pipeline (I think it is, for a lot of potential GS customers, one of the few obstacles to closing the deal). This is an important watch for Grand Seiko historically and marks a major milestone in the company’s evolution – I hope to have one in hand for a proper hands-on at some point.