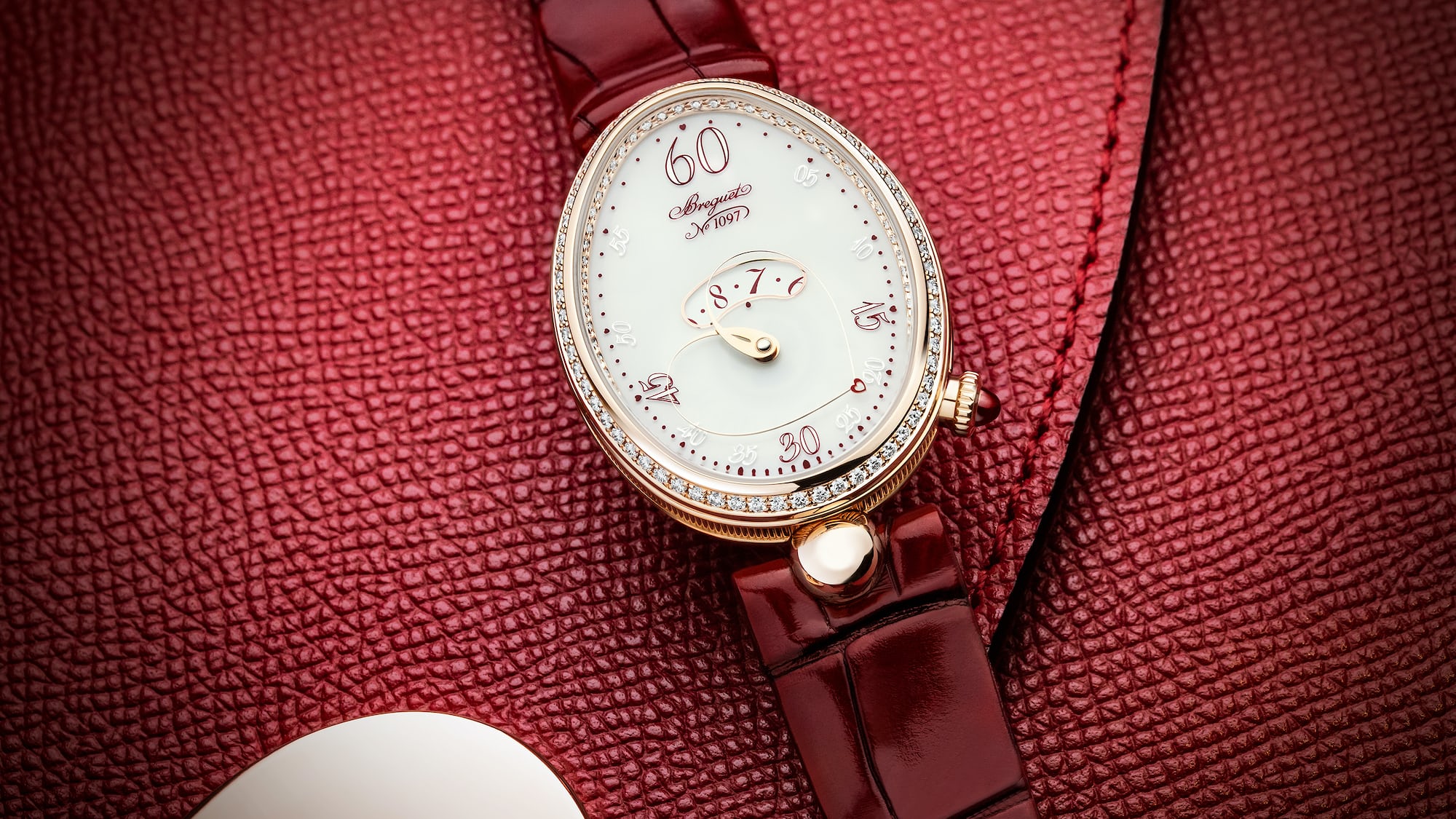 The Reine de Naples watches from Breguet are based on a timepiece originally made for Caroline Murat, née Bonaparte, a younger sister of Napoleon Bonaparte. Caroline Murat reigned as Queen of Naples for a relatively brief period – 1808 to 1815 – but she was one of Abraham Louis Breguet’s best clients, and one of her best-known watches was an unusual, egg-shaped chiming wristwatch, with thermometer. A thermometer on a wristwatch has always seemed a little sketchy to me unless you’re trying to keep track of your skin temperature, but who knows – maybe in the early 19th century, one took a morbid curiosity in how cold one’s boudoir got at night. In any case, while I think you’d be on slightly shaky ground calling this “the first wristwatch” (Queen Elizabeth I had a bracelet watch), it was at the very least a rarity at a time when mechanical watches of any kind were something of a rarity, and it’s the inspiration for the current Reine de Naples watches.

The newest member of the family is the Reine de Naples “Cœur Eternal Love,” which features a minute hand that performs a pretty nifty trick. The minute hand is shaped like a heart, and the cool part is that as the tip of the heart – which points to the current minute – travels around the dial, the entire heart expands and contracts, beating once per hour. The hours are read off a continuously rotating disk, visible under a sector above the central axis of the minute hand. While beating once per hour would be a little sub-optimal for an actual heart, it makes for a very interesting mechanical show, and the mechanism by which the heart is made to grow and shrink is really clever.

How does it work?

Two blades join at the tip, where there’s a tiny red heart to help you read the minutes (tiny hearts dot the minutes track at the quarters as well). The blades are made of a nickel-phosphorus alloy and manufactured using a process known as LIGA. Most long-term watch enthusiasts will recognize the term. It’s an acronym (from German) for Lithographie, Galvanoformung, Abformung (lithography, electroplating, and molding). LIGA has many steps, but basically, what you’re doing is growing a metal part, in successive layers, in a mold produced by etching with either x-rays or ultraviolet light.

The process lets you produce extremely precise microstructures, and in the years since it was invented (in the 1980s), it has become a staple part of the watchmaker’s toolkit, allowing the series production of parts requiring finer tolerances than can be achieved by standard machining techniques. To give just one example, Rolex uses LIGA to make the chronograph driving wheel for the caliber 4130 automatic chronograph movement in the Daytona, which has a split-tooth profile intended to give smoother engagement of the driving wheel with the chronograph seconds wheel.

In the Reine de Naples Cœur Eternal Love, the process lets Breguet make the two very fine blades of the heart to extremely precise tolerances. This helps ensure that the two blades expand and contract in the exact fashion necessary to keep the heart shape symmetrical, and also to make sure that the tip is placed accurately on the minutes track.

Though the blades are joined at the tip, they are not at the base. The foot of each blade is attached to a separate gear, both mounted on the same axis. One blade is driven continuously, rotating once per hour. As the heart descends to the lower part of the dial, a second driving wheel, with teeth only on one side, engages the driving wheel for the other blade, causing it to flex. The amount that the second arm flexes is determined by how far the second driving wheel turns which is, in turn, controlled by a follower pressing against the inside of a cam around which the driving wheels rotate. The amount each arm flexes has to be controlled very exactly, otherwise, the heart will not expand and contract symmetrically and, moreover, will not indicate the minutes past the hour correctly.

This is one of those mechanical solutions that makes watchmaking so much fun to study. I don’t know that I wouldn’t have come up with something like this, given enough time, but it certainly would have taxed my ingenuity to come up with it in anything less than a decade, which is probably one of the (many) reasons I’m better off writing about watches than trying to make them. The only other watch I can remember offhand having a similar complication is the Parmigiani Fleurier Pantographe Ovale, which I first saw as a prototype in 2011 and finally got around to writing up for HODINKEE in 2016. The Ovale is different: it has two hands which telescope in and out as they travel around the dial.

Above is the dial side of the movement in the Pantographe Ovale (the cadrature, as under-the-dial works are called). This is a modified Parmigiani Fleurier PF 110 “Hebdomaire” caliber, the first movement created by Michel Parmigiani when Parmigiani Fleurier was founded; the movement has an eight-day power reserve. In this image, you can see, with the hands removed, a cam with an oval track in it – my guess is that there’s a follower on the underside of the carrier for the hour hand, which moves in the track and causes the hand to extend and contract. The watch on which the Pantographe Ovale is based is in the collection of the Sandoz Family Foundation and was completed in 1800. I assume it uses a similar solution…but two centuries is a long time, it would be interesting to have both watches in hand, dials off, for comparison.

The Reine de Naples Cœur Eternal Love was released to coincide with Valentine’s Day, which is obviously a thing of the past, but hey, love abides all year long, and the intriguing mechanism has an enduring appeal as well. I’ve always admired the Reine de Naples watches – they are some of the most elegant watches anyone’s making, I think. Right now, this mechanism is only available in this single model, which is a 28-piece limited edition, but it’s beautiful and unusual enough to deserve a more permanent presence in Breguet’s collections.