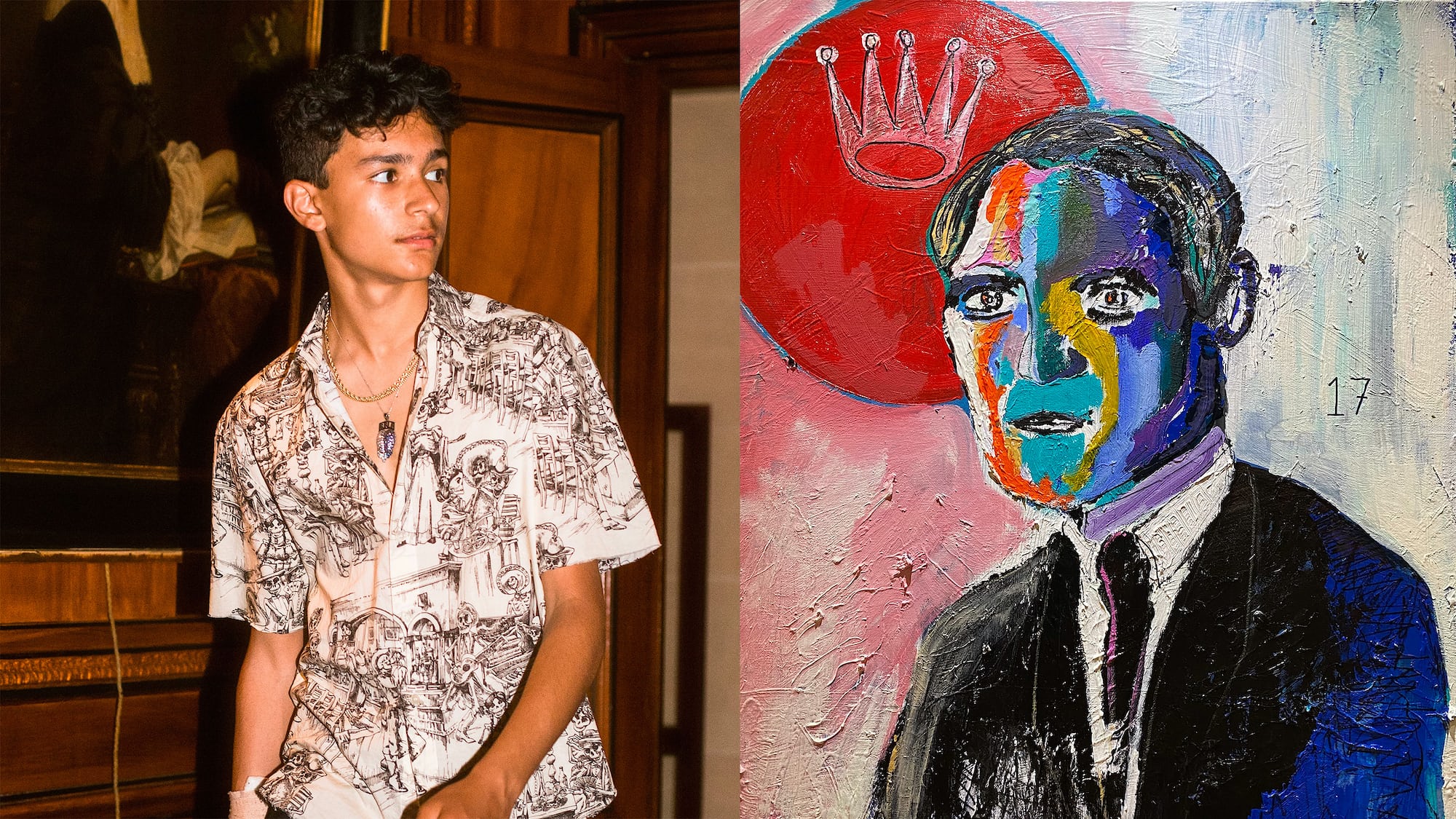 It’s the eyes that grab you. They’re arresting. Hypnotic. They’re unmistakably Paul Newman’s, even without the actor’s famous Windex blue. In this portrait, an acrylic on canvas by Evan Sharma, a 1960s-era Newman wears a suit and tie set against a red corona overlaid with a floating crown. As any watch enthusiast can see, the floating crown, stylistically evocative of Marc Chagall or Jean-Michel Basquiat, happens to be the brand raiment of Rolex.

Sharma, a wunderkind from Kingston, Ontario, is 17 years old. He digs Newman’s movies, and in general has anachronistic interests that include jazz, Francis Bacon, David Bowie, and painting in the Fauvist or neo-expressionist style. But it was the Rolex connection that drew him to Newman, and the reason why he decided to make the portrait.

As readers of this website can recite by memory, Newman’s Rolex Daytona ref. 6239 was a gift from his wife Joane Woodward, circa 1968. She had “Drive Carefully Me” engraved on the back. Called the “the greatest watch on the planet,” Newman became the “king of the watch” after his sold in 2017 for $ 15 million, bumped to over $ 17 mil after a buyer’s premium, making it the most expensive watch ever sold at an auction.

Just above Newman’s shoulder in Sharma’s painting, which itself is titled “Drive Carefully Me,” hangs the number 17. That Sharma is also 17 years old is a fun if unintentional nuance.

Sharma started painting on cardboard when he was about 10. He was recently back from Paris and a trip to the Louvre, where something inside him shook loose. He entered his first juried show at 12, was admitted, and in subsequent years has sold his work for thousands of dollars to enthusiasts all over the world, enough for Sharma to buy his very own Audemars Piguet Royal Oak self-winding chronograph. What appeals to him about watches is the marriage of the technical and creative aspects: the colors, the function, the form.

Sharma works in acrylic, which he sometimes mixes with isopropyl alcohol “because one is probably hydrophobic, one is probably hydrophilic, it creates a really cool separation and a super-rich pigment” that helps create his vibrant color palette. He is also really into science, which shows not just in the mixing of pigment but the stories he’s interested in telling: narratives about the climate crisis figure large.

The story that Sharma’s “Drive Carefully Me” tells, with its looming red sun and the heavy gaze of Newman, is about a moment in flux: when the actor transitioned careers, when he took a chance on a passion; when a certain “golden era” of Hollywood was coming to an end. “I also believe that there is something to learn from the era,” writes Sharma in his artist statement. “We are currently experiencing an environmental catastrophe that will soon become unfixable, and we are at a crossroads similar to the end of the golden age of Hollywood. In this painting, I strived to capture in Newman’s eyes both the urgency and tranquillity that can be associated with changing times.”

The eyes in Sharma’s portraits are always clutch. That his dad is an eye surgeon is no coincidence.

Sharma is grounded and kind and aware of the privilege of earning money as a painter, especially a really young one. “Drive Carefully Me” will be his contribution to the CoVart Challenge, a fine-art auction that he dreamed up and will launch on February 23 in partnership with Flying Kite, a charity based in Boston. The proceeds will go toward meals and school supplies for children in Kenya, whose education has been disrupted by COVID-19.

I recently talked to Sharma about watches, painting, the founding of the CoVart Challenge, and the story of Paul Newman’s Rolex that underpins it all.

How’d you get into Paul Newman?

My brother and my dad showed me old movies that Paul Newman was in, but then I heard about the Daytona and the auction, and I was like, that is so crazy, that his watch could go for that amount. And all the funds were donated to his foundation. I thought that was a super cool story that I wanted to tell with painting.

Paul Newman was definitely an icon, but he’s not super well-known with my generation. My friends who are into watches, all of them will know about that.

Everything You Ever Wanted To Know About "Paul Newman" Daytonas

While Paul Newman’s “Paul Newman” Daytona is in a class unto itself, it is part of a larger family of collecting that Ben dug into with Reference Points: Understanding The Rolex Paul Newman Daytona. Check it out to learn more.

What are we seeing in the painting?

A lot of it has to do with his transition from Hollywood into racing. The bottom of the suit fades away; I’m showing the formal attire that was fading into racing gear. And a lot of blacks and whites are used in it as well, to symbolize the racing flag. In the background there is a car, some spots are transparent so you can actually see it peeking through. The last big detail is the sun in the top corner. That symbolizes the sunset of the golden age of Hollywood.

How long does it take you to make a piece like this?

With portraits, I do like a month of research. A large part of my painting approach is to do a lot of layers. I did a portrait of Gandhi and used this approach where I wanted to tell the story through the different layers of paint. The first layer was Gandhi in South Africa, where he first realized a lot of injustices. Then I painted over that in white, and I painted the Salt March, which is when India gained its independence. And then over that, I painted the final portrait of Gandhi. So you could not just see the paintings underneath, but you could see the texture and the layers come through.

The bulk of the painting process probably takes place over a week. I find once you work on a painting over a few weeks, you want to start changing little elements. And then it really doesn’t end. You need to choose the place where you want to end because if you keep on going you’re going to lose the soul of the painting.

Tell me about the CoVart challenge

I conceptualized the idea this past summer. A lot of it was me just looking at the headlines and being like, okay, yeah, I really want to help in some way. My initial thought was to create a painting and donate whatever it sold for towards a charity. But I wasn’t too sure about certain charities. I talked to friends who are artists and people who are really knowledgeable in this area, and I saw that Africa wasn’t being hit hard in terms of case numbers, but access to education was being severely reduced. Two of my grandparents are from Africa, so I thought it would be a good way to give back to those communities. We have chosen to focus on rural Kenya.

We came up with the idea of rolling auctions. The first auction would start off with five or six different artists, collectors put in their bids for that week, and then whoever wins will get it shipped directly to them.

And you’re into watches?

Watches are a cool blend of technical and creative elements. You can get into chronographs and all different colors and split seconds and stuff.

I’m wearing an AP 38mm chronograph. I just got this a few months ago. I really like it.

Why’d you pick it?

I was going between this piece and the Yacht-Master, the rose-gold one. To me, AP is such a timeless brand, and for my first super cool piece, I wanted something timeless.

What will you work on next?

I am working on a series, a reimagining of what a lot of famous places will look like in 2050 using green tech. I just completed a piece about Machu Picchu.

Outside of that, I’m launching my fashion brand called RBLB, which stands for “right brain, left brain,” so, your creative side and then your more analytical, scientific side. And the first line is going to be a couple of hoodies, a couple of T-shirts focused on the Paul Newman painting. Not everyone can afford a painting. I don’t do prints or anything, so I think it’s a super cool way to make it more accessible.